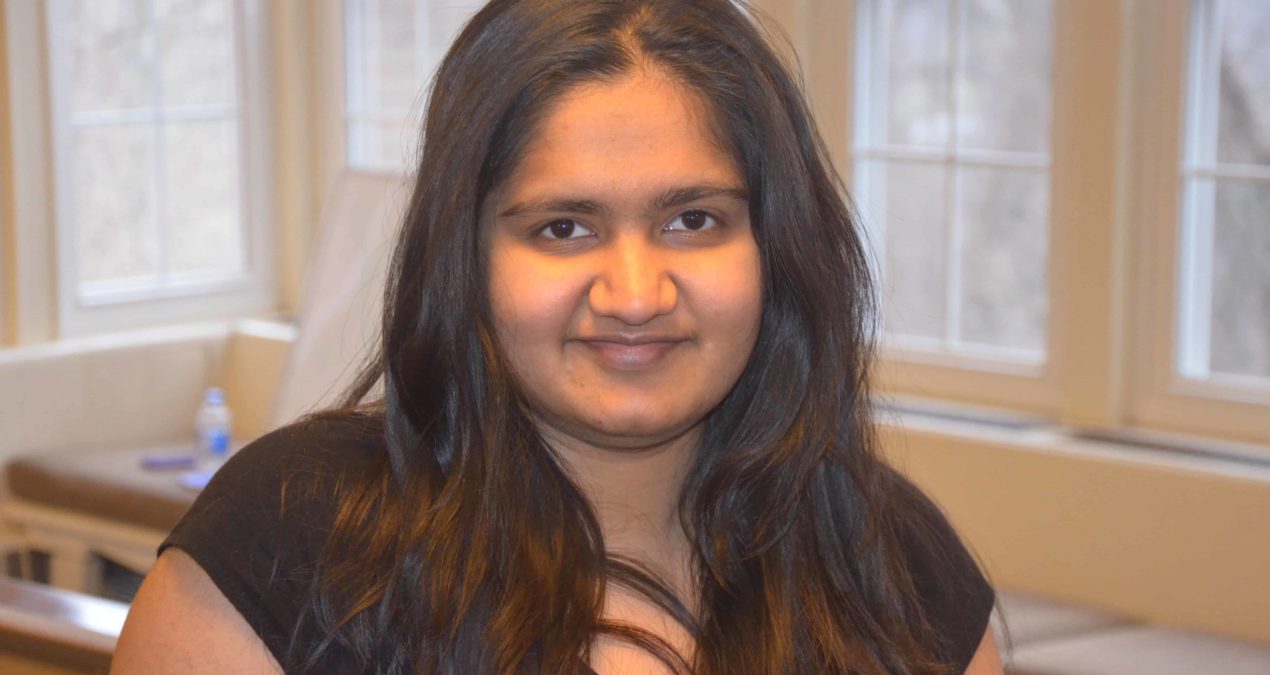 If a person ever asks where to find Harshida Pancholi ’15, there’s normally only one answer: Talbot. As a Biology major with a minor in Psychology and a concentration of Neuroscience, it’s a home away from home for her. No matter what day or time it is, she can usually be found hard at work in one of the labs. But it’s not her only commitment by far; She’s also an unofficial board member of the Denison International Student Association, an officer of the Neuroscience Education and Research at Denison club, a Share Advocate and a tutor.

With so much work to do, she rarely has any time to spare and that’s just how she likes it. Even now, as she sits to talk about her accomplishments, I can see her eyeing her laptop, eager for the chance to continue her half-finished papers. Her efforts did not go unnoticed when she received the Margaret Ann Watkin Award for academic excellence, passion in research and service in the field of biology.

What truly sets her apart from her peers is the research she is doing in the field of cancer research. “I’m trying to figure out how excessive acidity outside the cell breaks down proteins such that the cell gets more room to spread and migrate,” she said. “This migration makes cancer a problem because a tumor can spread from its original area and affect other places. My goal is to find a mechanism that would enable the development of a drug that would spot this spread.”

When asked why she chose breast cancer to focus on, she said, “My brother was a victim of blood cancer and that motivated me to do something about it. The research was a good starting point because my end goal is to eventually cure cancer.”

Professor Ayana Hinton, the head of the research that Harshida is doing, had a very high opinion of her student, “She’s definitely highly motivated, she’s hardworking, and she’s willing to work later or on a weekend if she needs to.”

Not only is Harshida willing to put in the extra hours, she is great at powering through setbacks. Hinton said, “She doesn’t let snafus discourage her, which is fantastic. If something goes wrong, she just keeps working through it and trying to figure out how to tweak the experiment so that it goes better the next time. So things have been working pretty well so far.”

Harshida concludes by commenting on her future plans, “Because my first love is neuroscience and I’m equally passionate about cancer research, I would like to ideally like to find a field that combines cancer and neuroscience.”