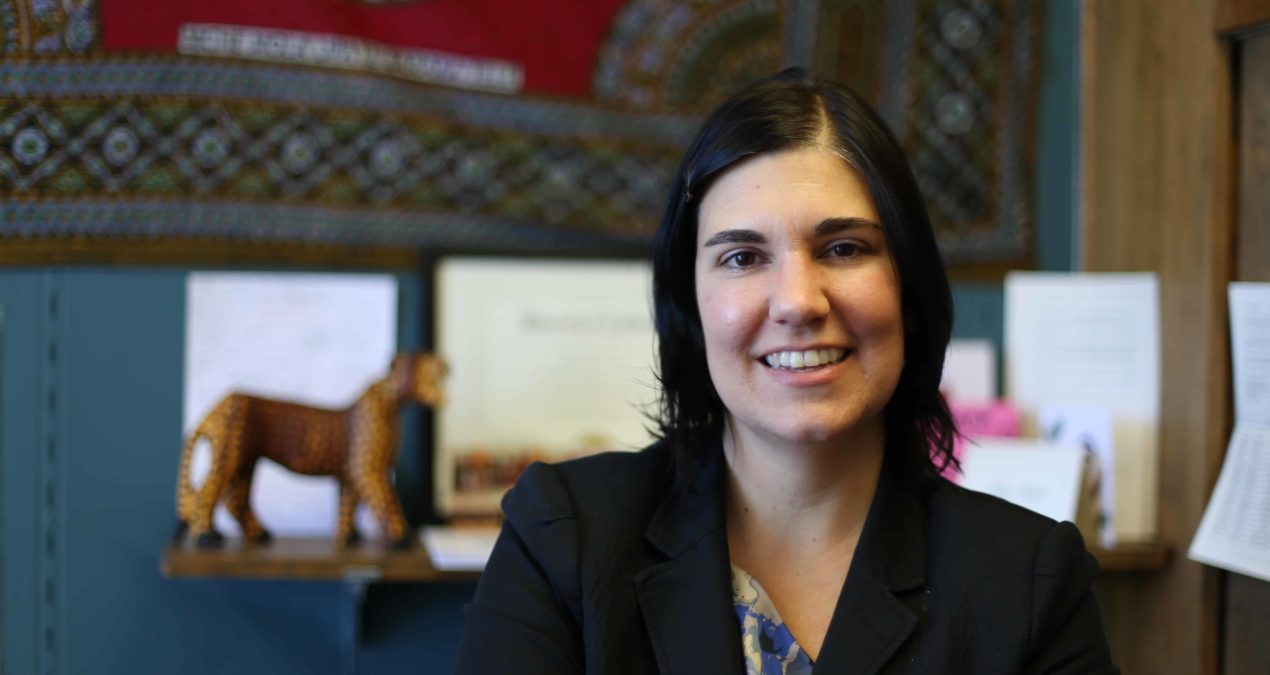 Whether walking along the cobblestones of Copenhagen’s meandering streets, in a Harare marketplace observing the vibrancy of art and music until 3am, or among the foothills of southern Ohio for the second time in her life, Dr. Joanna Tague, the Department of History’s Africa specialist, could certainly never be described as lethargic.

Daughter of an Irish-American father and an Argentine immigrant mother in Bryn Mawr, Penn., Tague was fueled by the worldly outlook of her family to travel the world at an early age. With little objection from her parents, she signed up for a high school study abroad program in Denmark. Once there, she picked up Danish, made friends, and took in the culture – Christmastime was an especially poignant memory. But she also discovered that, “you can’t make family out of thin air. Human-to-human connections take time to grow.”

Back home, she attended George Washington University intending to pursue international affairs as a major. However, she soon found that line of study to be “cold and lacking – too much a training ground for our military-industrial/diplomatic complex.” Inspired by her father who, despite having never been to Africa, had always been captivated by it, Tague took her first African studies course, taught by a twenty-something Nigerian diplomat.  “It changed everything,” she stated. “I thought to myself, ‘Why is this only the first time I’ve ever done this?’”

With this newfound captivation, Tague was inspired to spend her junior year in Zimbabwe, which was still known at this time as the “bread basket of Africa.” She encountered a society that was “both lively and burgeoning” – not the bottomed-out nation we know today. More importantly, she learned one of the essential lessons of history: that it is not black and white.  It’s easy enough from our western vantage point to view strongmen like Zimbabwe’s Robert Mugabe as ruthless tyrants. But from the perspective of the average African, a great deal of loyalty is attached to the men who led the anti-colonial struggles and a blind eye turned to their faults.

Even after returning to D.C., Tague’s wanderlust didn’t diminish. She spent her senior year working in the photo office of the Peace Corps headquarters, which led her to apply and receive admission. South Africa bound, she arrived in a nation attempting to create itself anew after the legacy of apartheid. Having completed two months of on-site training, she moved to a village “three hours north of Pretoria and an hour away from the nearest tar road!”

As the idealism of the volunteers hit the grindstone, many of them dropped out, but Tague stuck it out. She had already learned Shona from her time in Zimbabwe and used that knowledge to grasp Sutu, the local tongue.

After earning the trust of the locals, she embarked on several tasks: setting up a curriculum in the school, establishing a library, and working in sewing and chicken co-ops (at the latter, she learned how to inoculate poultry – “something I never thought I’d ever have to do!) Such was her closeness to the villagers that she even lived in the chief’s house, where she was dubbed “the chief’s daughter.”

For someone who would go on to become a history professor, watching history occur before her eyes was a priceless experience. Tague’s village was surrounded by Afrikaner farmsteads, so she bore witness to the younger Afrikaner men, who “spoke Bantu dialects and dated African women.”

She also remembers “the old Afrikaner farmer who drove up to me in his truck one day and without pause ordered, ‘Get in!’” When she protested and tried to explain her mission in the black village, “he kept repeating himself. ‘Get in! Get in! You don’t understand what you’re doing here!’ Eventually he drove away, absolutely stupefied.” This taught Tague a valuable lesson: that the faultlines of conflict aren’t always racial, but sometimes generational.

After returning stateside, she pursued her masters at Ohio University, where she met her mentor. “Everything changes when you meet your mentor, because he or she can help to steer you in the right direction.” For Tague, that direction involved picking up Swahili and moving on to complete her Ph.D. at the University of California, Davis.

Now she joins us at Denison, which impresses her as a school that “punches above its weight when it comes to Africa.” For Tague, this is the next adventure.