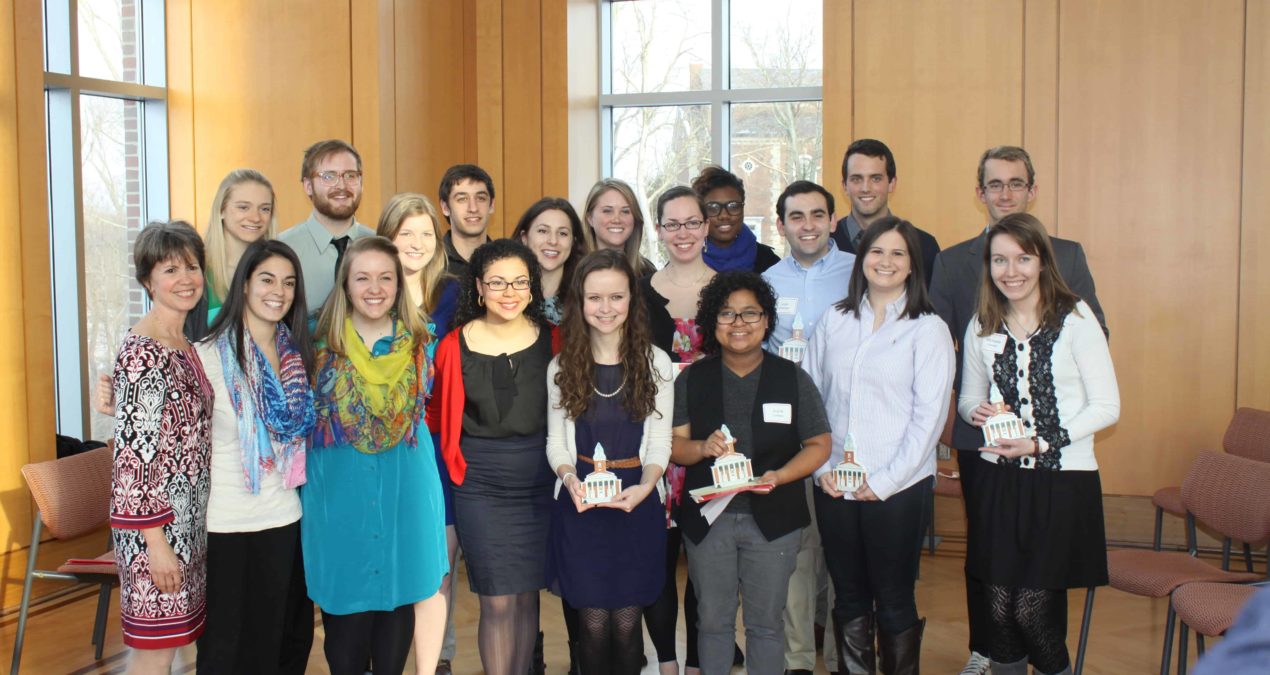 The applause from Knobel Hall for the winners of the Distinguished Leadership Awards (DLA) could be heard throughout Burton Morgan. Twenty students were selected from a list of 92 applicants to receive the DLA award.

Laurel Kennedy said that every year, Denison gives these awards to graduating seniors who have made “some sort of transformative impact, [made] some sort of change in the campus that will last after [they] have graduated.”  The ceremony was short, as Dr. Kennedy delivered a speech and then called each student to receive their award, citing their accomplishments.

When asked about how students were chosen to receive these awards, Dr. Kennedy said that during the application process, they are “looking for evidence of a transformative impact upon the campus through their leadership. We ask students and recommenders to talk about that.”

She also said that the way students wrote about their experiences was also taken into consideration. “We want students to be reflective about their experiences, but we also think that when students have engaged in thoughtful reflection and are able to draw some conclusion about what the lessons of certain challenges are, for example, they are more likely to continue to be leaders.”

Michaela Grenier ’14 of Downers Grove, Ill., an international studies and women’s studies major, talked about how surreal it felt to have won the award. “I remember looking up to people before who have won and just…it feels very strange to be in that position.” She also wished there was a way to honor everybody else as well. “There are so many people who aren’t up here today who really deserve it. There are so many leaders at Denison that I wish there was some way to award all those people.”

Jaime Zito ’14 of Phoenix, Arizona, a religion major, shared Michaela’s view. “I feel very honored to have it, but like [Dr. Kennedy] said, 92 people applied, so it makes me sad because we have so many leaders on our campus that I wonder if there’s a way everyone can be awarded for their exceptional leadership.” Regarding how she felt when she got the award, she said she felt mostly surprised. “You don’t do things to get awards. When you’re doing things, like being involved in UPC and throwing events, I wasn’t thinking that I was doing this for some awarded, so to see other people award for doing things because you wanted to do them, it’s kind of a surprising and interesting feeling.”

Carlos Maciel ’14 of Recife, Brazil, an economics and international studies major, said he “felt really good” when he won the award. “I’ve done lots of work here, but I know a lot of other people who got nominated and I don’t know if I deserve it more than they do. I think it’s a great honor.” Regarding the award, he said, “I think its great recognition for the people who do good for this school. I think it’s necessary to recognize them.”