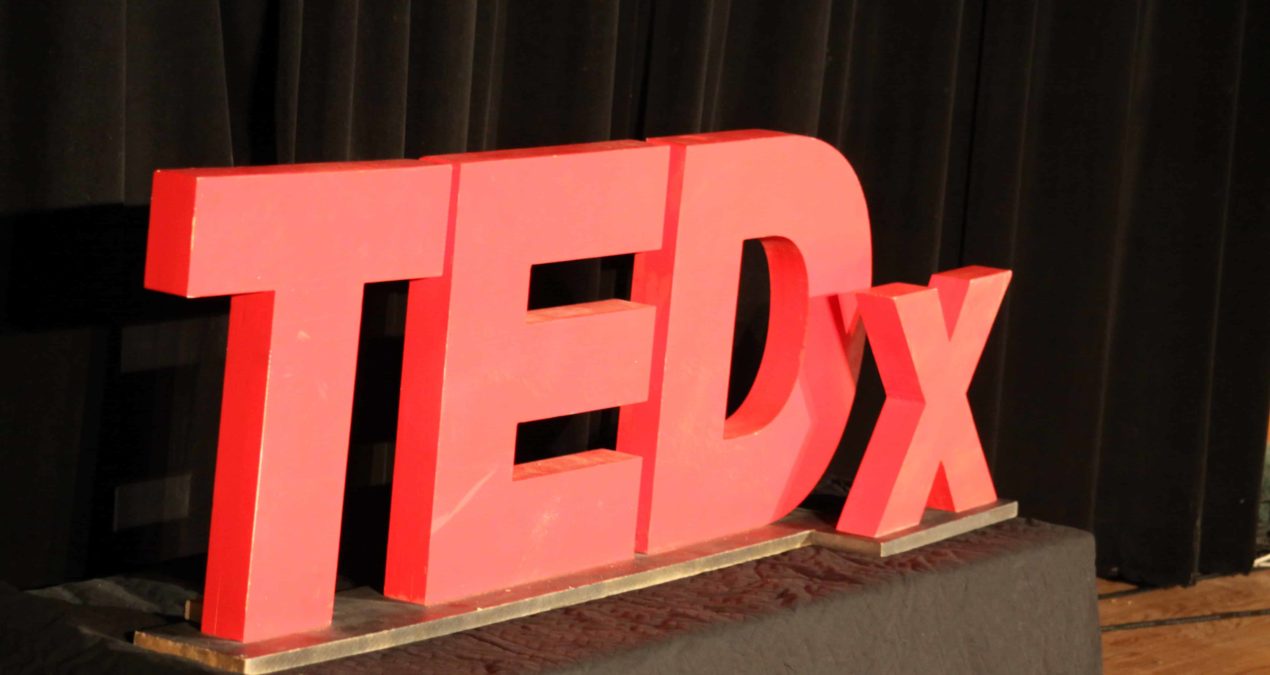 by Jake Dennie
No Comments

The stage was set with an eye-catching 3-D cutout spelling “TEDx” and a simple red circular carpet that drew attention directly onto the speaker, along with a variety of international street signs on either side, showing that there are many roads to Utopias.

The audience perked up when  President Adam Weinberg took the stage as the moderator and host of the event, and the show was on the road. Last Saturday, fourteen Denison students, faculty, and community members came together for TEDx DenisonU to give short talks to a live audience in Herrick Hall and others through a live stream in Slayter and on the internet.

TEDx is a localized version of a TED convention, a series of talks about “Ideas Worth Sharing.” TED talks recorded from the conventions are posted on their website and are extraordinarily popular. TED (originally Technology, Entertainment, and Design) has granted licenses to groups to host their own event in the TED model in their community.

event in the TED model in their community. A group consisting of Dylan Parson ‘16, Isabel Randolph ‘16, Alexander Tybl ‘16, Rohin Daswani ‘15, Marlaine Browning, and Stephanie Hunt-Theophilus decided to bring the event to campus with the theme of the Spectrum Series, Real Utopias: from Dreams to Practice.

The first run was relatively smooth, but there was a concern that 40 of the audience members who were issued tickets did not show up for the event. The smaller crowd had an effect on at least one of the speakers: “I was really bummed that a lot of people didn’t show up,” Mollie Evans ‘16 reflected.

Stephanie Hunt-Theophilus, the event coordinator, hypothesized that because the event was simulcast in Slayter and available for live stream on any computer, many would-be audience members simply stayed home to watch the event.

Despite minor problems, the event went fairly well, especially for its first run. Mac Sellers ‘16, the first speaker, commented that it “went remarkably smooth for its first time.” “The whole organization was the way it should have been,” concurred Luke Romick ‘16, another speaker. The experience for both the audience and the speakers seemed to be extremely beneficial. “It was amazing to see fellow Denison students take their life experiences and apply them to things that they’re passionate about,” explained audience member Ryan Keller ‘16. Speaker Quenton Richards ‘16 described the “supportive atmosphere backstage,” explaining how he was able to “build relationships with the other speakers,” making it a powerful experience for him. This experience motivated Evans to move beyond her wariness of public speaking, saying that she participated because “it would be really hard for me but really rewarding.”

The speakers and the planning committee had a planning process that was “rigorous,” according to Romick. The planning committee had been working for over a year to set up the event, coordinating with TED for the license and setting up food, recording, coaching, and countless other details. The speakers had to apply for the talks in December with an idea about their topic, audition, edit their talks, memorize them, and then go to three separate rehearsals to make sure everything ran smoothly.

The energy carried throughout the event as 14 speakers gave 13 talks ranging from 6 to 18 minutes each. The talks were punctuated by two short intermissions, during which the audience was given refreshments and encouraged to go beyond the superficial in their conversations with other listeners, and three videos from TED Oxford that pertained to the Utopian theme.

Each of the speakers challenged the way in which we view certain aspects of our lives, such as self, others, society, education, charity, and the environment. The first speaker of the day was Mac Sellers ‘16, who challenged the way in which we view ourselves with respect to our surroundings, reminding the audience of the importance of being vulnerable as a means of building relationships, offering examples from his own life, and showing how we use technology to “self-edit” our image and minimize our accountability and vulnerability. The reminder to be vulnerable offered an excellent way to start off such a forward thinking event.

Another highlight of the afternoon was an innovative and unique tandem performance by Richards and Romick. The duo dismantled Pierre Bourdieu’s theory of Cultural Capital, creating their own graphical theory and using their insights to show how people can eliminate pride in order to strive to better themselves and become “ideal” people. Richards and Romick said of their two-person speech that they “gave the committee an ultimatum” that they wouldn’t do it alone and that “we bounced ideas off each other for hours; it wouldn’t have been right if it was just one of us.”

The event ended on a high note with Grace Bachmann ‘17, who used bridges as a metaphor for not only making connections between point A and point B, but allowing a “plunge” into the gap in between. She explained through this metaphor how she got a global education despite only going to schools along nearby State Route 161.

The hope for the event was to stimulate thinking and conversation about the topics discussed and beyond. “That presentation is what came from us questioning the norms of society,” explained Romick. “We hope this sparks a discussion.”

If you missed the talks, they will be posted on YouTuWbe in the near future, and the planning committee is hoping to make TEDx Denison U into an annual event.