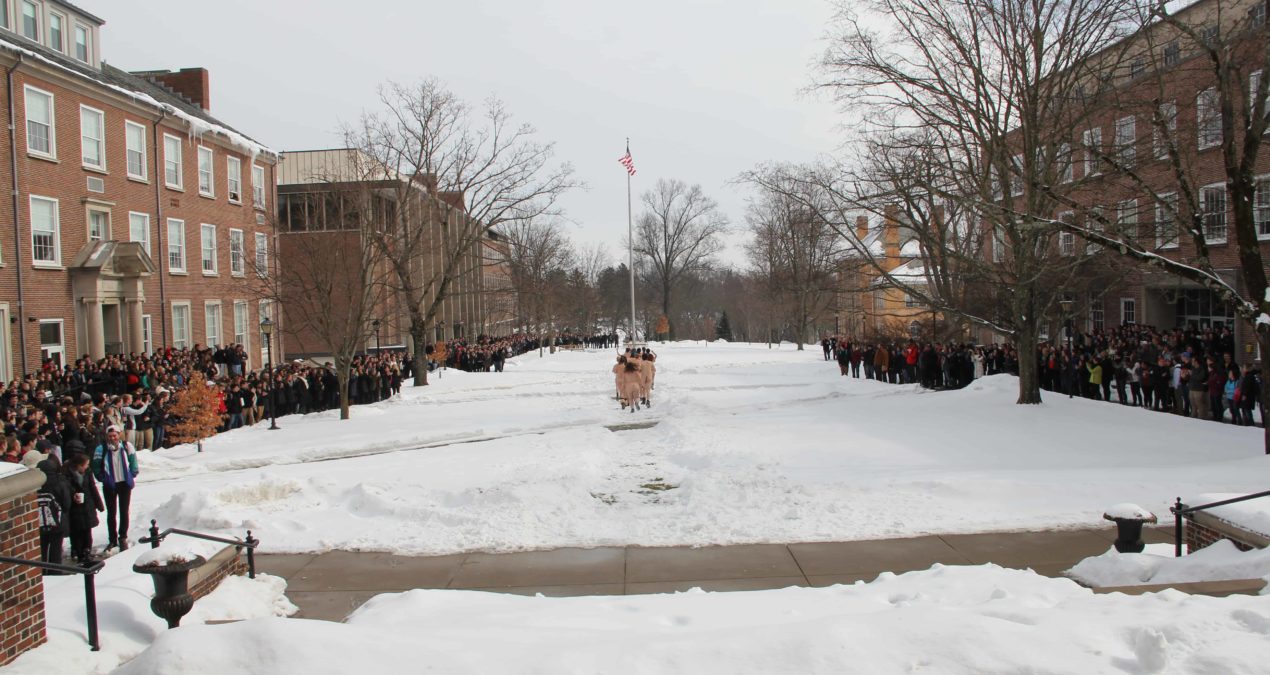 Empowered. Free. Proud. These are just three of the words that are used every year by Naked Week participants to describe how they feel after running nude with a group of people clothed in no more than their birthday suits. The aim is to promote healthy body image and acceptance. However, we as Denisonians need to ask ourselves: why do we only talk about body acceptance one week out of the year?

It’s easy to preach body image when most of the student body (pun intended) looks the same. While Denison is more diverse than it was twenty years ago, I think we can all agree that there still exists a “typical” Denison student image in everyone’s minds. This student is probably white, upper-middle class, and may be involved in Greek life. They’re also probably “conventionally attractive,” meaning they’re thin and in great shape, which can be tied to one’s economic background as well (healthy food = pricier food, in America).

So if there’s lots of “hot” people, does this mean that everyone here is comfortable with their appearance? Not necessarily. In fact, I think it adds to the already-present stress many people have about their bodies. Furthermore, we tend to view body image as exclusively a women’s issue, which would be unfair.

Girls and women are expected to be “pretty,” thin, sans any body hair or acne, made-up, and have neat hair; it’s pure hyper-femininity. By the same token, boys and men are often told to be hyper-masculine: they’re expected to be muscular, “manly-looking,” and athletic.

The messages are entirely scattered when it comes to clothing too. Women should be modest but sexy, men shouldn’t care about clothes but they shouldn’t schlep it. Also, the issues about body image and appearance faced by those who are transgender/-sexual are abundantly complex. Really, how we view our physical appearance is impacted by the outside world no matter what we call ourselves.

I think that on an image-conscious campus like Denison’s, we all have our looks a lot more on our minds than is probably necessary. Before coming here two years ago, I had been told college was a place where people wore pajama pants all the time. Instead, I found a wealth of khakis, and I learned what Patagonia is.

Here’s the thing: in the real world, people look a thousand different ways – and all the better. Ever hear that expression “Beauty is in the eye of the beholder?” It’s true. Does your life feel anything like what you see on TV or in magazines? Odds are, probably not. So why would you expect to look like you’re straight out of Cosmopolitan or Men’s Fitness? You shouldn’t, and no one else should expect you to.

I’m not claiming to be an expert, nor am I trying to say I’ve never worried about how I look, but just because you feel like you’re surrounded by “pretty people” doesn’t mean you need to consider yourself inferior in some way. If Naked Week helps our campus move toward happier, healthier self-image, that’s awesome. But we as a community need to keep those positive ideals in mind year-round, not just for one frigid February week.