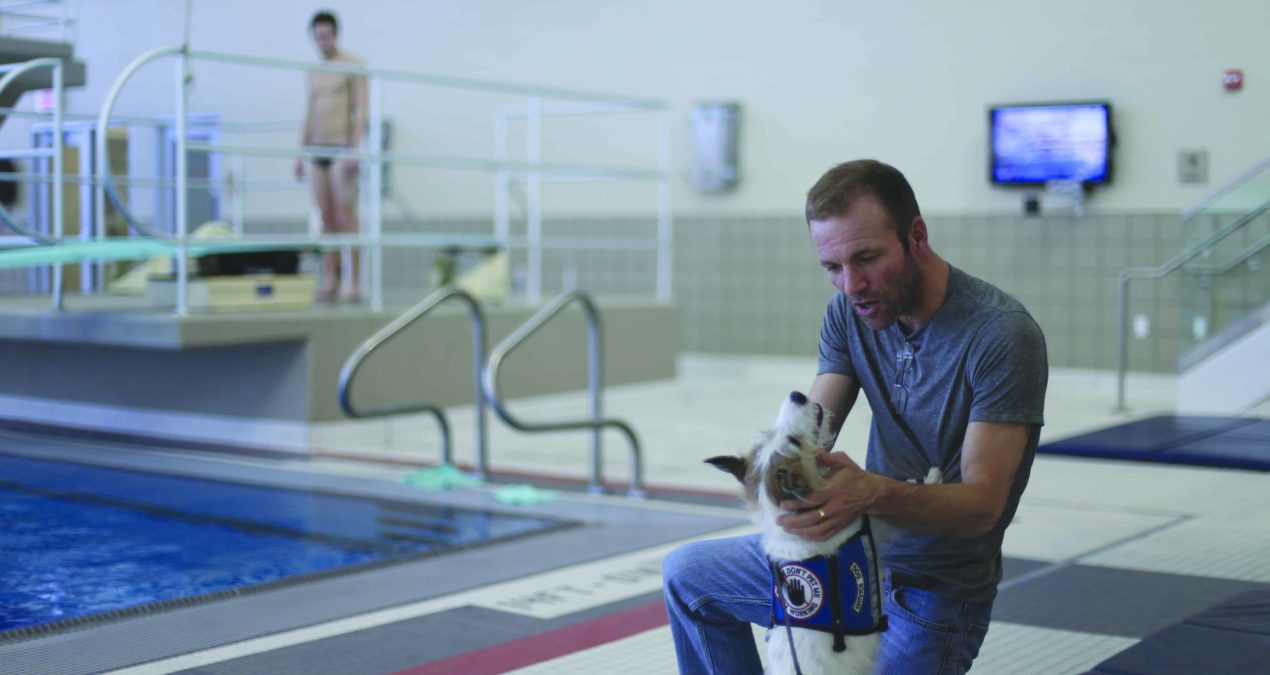 Diving coach Russ Bertram stands besides the diving well, inspecting the competition, while his Jack Russell terrier, Hairy, sits at his feet. Hairy lets out a loud bark as one dive makes a particularly large splash. Bertram calls his divers over before they prepare to begin warming up. “Don’t think too much about the dives, just land on your head,” he says. “You’ve done these dives so many times, and your body will faithfully recreate the last image you see of your dive.”

Bertram is in his first year as the head men’s and women’s diving coach at Denison. A 35-year veteran of diving, the coach recently added another item to his impressive list of accomplishments. Four of his male divers, Max Levy ’17, Connor Dignan ’15, Ben Lewis ’16 and Brian Allen ’17, qualified for the NCAA Division III National Championship at the NCAA Division III Diving Regional held at Trumbull Aquatics Center from Feb. 28 to March 1.

One of the most notable things about Bertram is his Jack Russell terrier and service dog, Hairy. Bertram was diagnosed with Type 1 diabetes twelve years ago, and had always wanted a Jack Russell. Five years ago, Bertram went to a breeder to get a puppy.

“I played with a few of the puppies who were ping pong balls, bouncing all over the place, that’s a normal Jack Russell. And then I saw in the breeder’s arms, he was holding a little girl who was real timid. I held her for 20 seconds and she started licking my neck and I said ‘that’s over’, so I took her home the next day.”

Bertram said that Hairy is “atypical for a full-blooded Jack Russell in that she’s much more calm.” At the age of six months, Hairy was evaluated so that she could become a service dog to monitor his diabetes. “She is a unique situation, very unusual, and she has grown up in the public so she’s comfortable with large crowds. It’s a match made in heaven.”

Hairy and Bertram have spent so much time together that Hairy is now able to tell the difference between a good dive and a bad dive. “She’ll sit beside me at events and she just watches them walk down the board and follows the dive and for some reason I can’t explain, if they go straight in and it’s a good entrance, there’s no response from her, but if she watches a dive and they’re way off and they make a large splash, she gets very upset and barks.”

Big Red divers said that Bertram and Hairy are an excellent coaching team. “Hairy is the sweetest dog I’ve ever met and she’s so smart,” Morgan Christman ’17 said. “She knows before a bad dive happens that it’s going to be a bad dive so as soon as you’re walking down the board she starts barking.” Carrie Bookheimer ’17 added, “It’s good because it teaches you how to dive even if there’s a distraction, which can happen in a meet.”

Bertram has been all over the spectrum when it comes to diving: he has been a competitive diver, coach, judge, referee and administrator. “Over this many years, I’ve accumulated a lot of good information and tricks to help divers progress as much as possible in the sport. I’m not sure if it was a curse or a blessing to have such diverse and different experiences, versus one very long established career, so I just take what I have and what I went through and use those experiences and that knowledge to be as good of a coach as I can.”

Bertram began coaching for the Big Red in Sept. 2013. “I’ve never really administrated or coached in the Division III level so it was very novel,” Bertram said. “The day I came out and interviewed with everyone, I fell in love with the school and the approach of the program.”

Bertram began his diving career at age ten but did not become very dedicated until high school. He walked onto the swimming and diving team at Division I Indiana University. He made the United States National team after graduating in 1989. Bertram got his start in coaching at Ohio State University in 1990, where he served a year as a graduate assistant diving coach for a team that included six Olympians and 10 U.S. National Champions.

Bertram moved to Fort Lauderdale, Fla. to train, supporting himself by coaching in between workouts. As a competitive diver, he won five U.S. diving national championships in the 3-meter springboard and the 10-meter platform. He competed for another ten years and retired at the age of 31. After his retirement, Bertram spent a year as the head men’s and women’s diving coach at Florida State University and then moved to Mission Viejo, Calif. to coach the Mission Viejo Nadadores dive club from 1999-2002. While coaching in Mission Viejo, Bertram led the club to consecutive national team titles, along with 13 individual titles.

“I wanted to learn what it was like to run a full contingent, a true club, from beginning lessons to Olympic level athletes and that provided that opportunity,” Bertram said.

Bertram retired from coaching in 2002 and served as the national events director for United States Diving until 2005. Prior to that, he served five months as the U.S. Olympic Committee Athlete Services Coordinator for the 2004 Athens Olympic Games.

He moved to Tucson, Ariz. in 2006 after hearing about a coaching position that opened up at the University of Arizona. However, the coach, Michele Mitchell, decided not to resign, so Bertram served as Aquatics Director instead, a position he held for seven years before coming to Denison.

In 2010, Bertram was presented with the Phil Boggs Award from USA Diving for lifetime commitment to the sport. Bertram has also been recognized by FINA, the sport’s international governing body.

The coach said that his most interesting experience in diving was when he was featured on the cover of Life magazine for a black and white photo shoot that he posed for in the nude. The issue also featured Olympic greats like Carl Lewis and Jackie Joyner-Kersee.

“A few days before the 1996 Olympic Trials, my  parents showed up at the pool. My dad was carrying this magazine that he had just picked up, smiling from ear to ear, beaming, and that moment meant more to me than anything,” Bertram said. “I call that my ‘true fifteen minutes of fame’; I made the cover of Life magazine buck naked.”