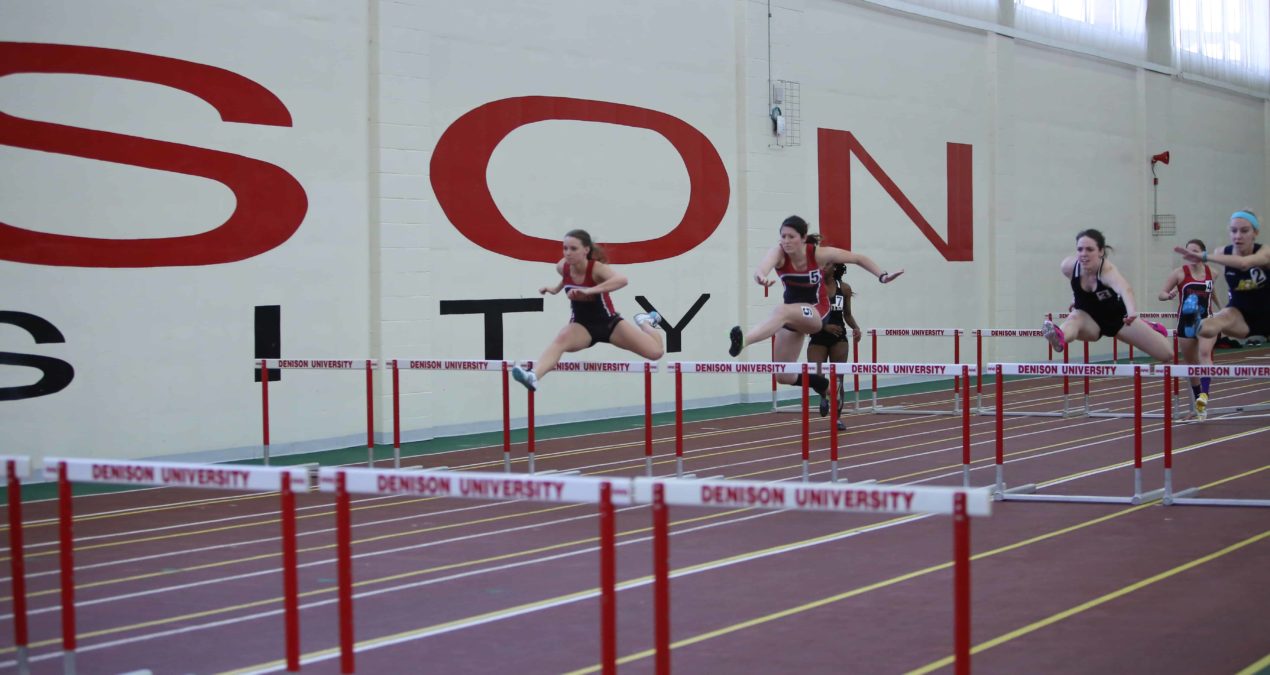 Although last Saturday was the second hottest Saturday in Granville since the year began, it may have paled in comparison to the sizzling performances displayed at the 2014 North Coast Athletic Conference Indoor Track & Field Championship. Perhaps the spectators in the Mitchell Fieldhouse, many of whom travelled from out of state, thought that spring came early to Granville as they witnessed the Big Red athletes earn some of the highest honors in their sport while subsequently burning past personal, facility, and school records.

The Men’s Indoor Track and Field Team began their onslaught on Friday afternoon, while the women ended Saturday with their best finish since 2005 after beating out Oberlin for second-place in an intense skirmish whose final result was not truly known until the final seconds.

The men of Big Red ended the first day of competition in third place after competing in the first 5 of 18 events. Denison was able to gain 27 points in day one due to the efforts of athletes like Wallace Branche ’16. Branche captured his first NCAC Championship after securing the win with a jump of 45’11. 75’. “I felt very accomplished and glad that I had my teammates as well as opponents on other teams in the conference to support me along the way,” Branche explains.  His leap beat second place by 5.50”. Lester Harris ’17 placed fourth with a combined jump of 43’8”. Denison was able to gain 15 points after attaining these two top-4 finishes in the triple jump at the start of the day.

Andy Shaw ’15 helped Denison gain an additional three points after producing a six-place performance in the shot. Jake Dennie ’17 gained eighth place during his NCAC Indoor Track & Field Championship debut by completing the 5,000-meter with a time of 15:34.00.

The distance medley relay was the final race of the night. Mitch Keller, Zach Cove, Jon Brachna and Ryan Keller earned the Big Red eight important points after finishing runner-up with a time of 10:30.03.

In the preliminary, Quenton Richards ’16 qualified for the finals in both the 60 and 200-meter events. Richards preliminary time of 7.04 in the 60-meter was good enough to secure third-place. He would later return to post a time of 23.28 in the first heat of the 200-meter dash. Richards qualified for Saturday after securing seventh at the end of the four-heat preliminary round.

The Fields events began the following morning at 10 a.m. while the running events started at 2:30 p.m. Some of the most impressive highlights of the second day of competitions came from Richards. A native of Franklin, Richards racked up four top-10 finishes and helped the Big Red score in three of those events. Richards day started off slow as he barely missed points in the high jump with a close ninth-place finish. Nevertheless, he would go on to help the 4×200 relay team obtain seventh-place in the first running of the afternoon. Richards alongside Michael Bonebrake ‘17, Ian Mulmat ‘16 and Jon Brachna ‘14 completed the race in 1:35.94. Less than two hours later, Richards returned to post a new-school record in the 60-meter dash with a new personal record of 6.99 that placed him third. It is worth noting that Richards set the previous school record of 7.01 at the inaugural Bob Shannon Invitation on Feb. 8. “Going sub 7 in the 60m dash was something I’ve really been working towards all season, and was actually one of my New Year’s Resolutions,” Richards explained. “Placing 3rd and earning NCAC Honors really justifies the hard work I’ve been putting in to drop my time.”

After resting for only twenty minutes, Richards was called up to compete in the 200-meter dash where he entered the finals as the seven seed. Still, he was able to complete the race in an astounding time of 23.08 that landed him in fourth.

Brachna, Zach Cove, and Ryan and Mitch Keller ‘16 represented DU in the 4×400 relay. The relay team finished second in their heat and sixth overall after crossing the line in 3:32.62. After two days of competing, the Men’s Track and Field team finished the 2014 NCAC Conference in seventh place. The Wabash Little Giants captured the title for the fourth-consecutive season.

Like the men, the women’s Indoor Track & Field team ended day one in third-place. After winning the triple jump with a school-record jump of 37’1”, Aedin Brennan ‘16 captured her third NCAC indoor title. Anne Lee ’17 gained five points for Denison after placing fourth with a combined jump of 34’00”. Olivia Galano ’14 also earned All-NCAC honors and finished the 5,000-meter event with a new school record time of 17:24.59. Abbi Boss ’15 placed 10th after shattering her previous personal record by 19 seconds, completing her event in just 18:46.75. Big Red secured third place at the end of the second day after Kiersten Geary ’15 cleared a season-best 9’8” and effectively earned DU two points. Finally, the Big Red’s distance medley relay team wrapped up the day by taking fourth which placed Denison in third-place.

Denison headed into Saturday trailing second place Oberlin, who has finished second for the past two years, by four points. Nevertheless, the Big Red had athletes that were able to rise to the occasion and clinch the second-place position from the Yeowomen. Leading the Big Red’s quest for silver was Tiffany Davis ‘14, who gained her third-consecutive indoor Sprinter of the Year award, and Aedin Brennan, who was named women’s indoor Field Athlete of the Year for the first time. “I am honored to have received the title of Field Athlete of the Year. I truly appreciate being recognized for my efforts in the field events,” Brennan said. “It is very satisfying to see that all the extra training has paid off.” Davis said, “It feels amazing. I always feel honored to receive this award. It never gets old. There are so many sprinters in our conference that I feel are very deserving of this award. So to earn three means so much.” The duo racked up six event titles and seven All-NCAC certificates.

Denison turned Oberlin’s four-point deficit into a fourteen-point lead after Brennan and Lee gained the top two positions in the long jump. Brennan would go on to increase Denison’s lead by gaining seventh in both the high jump and the shot put. Still, the Yeowomen would not go down without a fight and soon regained the lead. At one point, Denison and Oberlin were tied for second with 68 points apiece.

In what seemed like a scene from a movie, Abbie Boss ’15 found herself heading to her event with the score tied and the pressure of gaining the lead for Denison on her shoulders. “I knew it was a battle between us and Oberlin and every single point would matter,” explained Boss. “Therefore, I was anxious and nervous but excited and pumped up on adrenaline as well.” Boss not only gained Denison a one-point lead by placing fifth in the mile, she also broke the school record in the process. “I was thrilled with my time because I have been trying to break 5.20 in the mile since freshman year.  However, scoring for my team and putting us back in the lead was the most rewarding part of the experience.”

Brennan and Davis would go on to increase Denison’s second-place lead by winning the 400-meter dash and 60-meter dash, respectively. Oberlin then diminished Denison’s lead until Davis won the 200-meter dash. Olivia Galano ’15  also contributed to Denison’s lead by placing third in the 3k. Although the Big Red knew by this point that they had secured their coveted second-place position, Denison decided to end the conference on an even more positive note. The 4×400 team of Brennan, Ireland, Yewer and Davis won first place in their final event at the Championship.