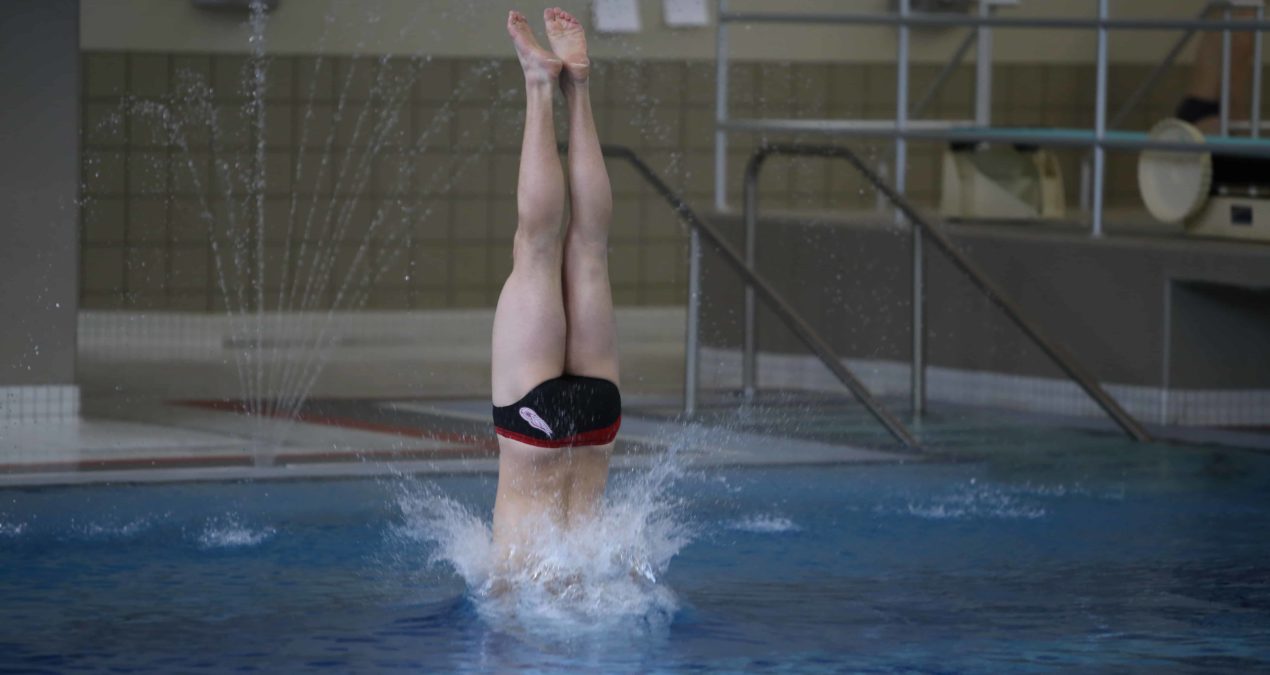 A loud round of applause and cheers echoed off the walls of Denison’s Trumbull Aquatics Center as the announcer listed the names of the qualifiers for this year’s edition of the NCAA Division III Swimming and Diving Championships. Only nine of the twenty-five divers competing at the NCAA Diving Regional this past weekend could qualify for the national championship, and Max Levy ’17, Connor Dignan ’15, Ben Lewis ’16 and Brian Allen ’17 found themselves among that group.

“I think that we all did a really good job. We went out there and did what we’re supposed to do, and the results match up,” Allen said.

Diving coach Russ Bertram said that the team’s energy has grown since the conference championships. “The boys were really good. At conference approximately two weeks ago, they really dug deep. It was very heart and soul,” Bertram said. “The swimmers and divers were just amazing coming off of a very traumatic experience. I think it’s been a tough recovery from that because the mentality, their emotions, their heart and their physical level were drained and they really kind of surfaced this last week.”

“We have four boys going, and that’s two freshmen, a sophomore and a junior so three of them are underclassmen and that’s amazing. They’ll get the experience and be able to go back every year, and I think that’s just a wonderful finish to the season. They’re great representatives of Denison Swimming and Diving.”

On the first night of competition, Denison claimed the top three positions and  placed five in the top nine. Levy was the champion in the 1-meter board with an 11-dive score of 535.85, followed by Dignan with a score of 531.65 and Lewis with a total of 489.00. Dignan won the North Coast Athletic Conference championship en route to establishing a new national record in the event in February, while Lewis won the 1-meter board at the national championships last season. Allen and Connor Dorff ’15 finished in eighth and ninth place.

Levy’s best score of the competition came in the fifth round, when he completed a back 1 ½ somersault, 1 ½ twist free with a 2.5 degree of difficulty to earn a score of 58.75. Six of Levy’s eleven dives earned 52 points or more.

“I feel really great winning the 1-meter. It’s a team effort, so we keep competing for the top places. Whoever gets it, gets it,” Levy said. “I’m really proud that I was able to win 1-meter, and I’m really proud of all my other teammates, especially Connor Dignan, who came in second. It was neck-and-neck the entire time.”

Dignan trailed Levy by a narrow margin throughout the competition but had a chance to catch him on his final dive. However, the junior’s 2.2 DD dive earned him a score of 48.40, and he came just shy of defeating his teammate. Dignan recorded the highest individual round score of the competition with a 65.00 on his fifth dive.

Lewis, the reigning national champion in the 1-meter board, said that his focus at nationals will be on contributing to the team effort. “I’m not too worried about my individual performance [at nationals],” Lewis said. “I’m more concerned about doing the best I can to help out the whole swimming and diving team, because we have a goal this year to win a national championship.”

The second day of competition began with the men’s 3-meter board, which Dignan won by a landslide with a score of 614.65. Levy was runner-up in the event, with a score of 530.95. Allen earned a trip to nationals after placing fourth. Lewis finished ninth while Nathan Lightman ’16 found himself just outside the qualifying after finishing in 11th place.

Dignan set a national record in the 3-meter at conference two weeks ago. “In a way, breaking both national records at conference has put some personal pressure on me,” he said. “Every time I compete, I strive to improve from my best; therefore I will always be reaching to break my records again and again. I do tend to get a little nervous during high profile meets such as conference or nationals. However, I love performing under that kind of pressure. The nerves don’t really tend to bother me; they’re more like butterflies of excitement than being nervous.”

This summer, Dignan found out that the cartilage in his left knee had nearly diminished completely. His kneecap now sits too low, which causes some strain on the tendons below his knee. Despite this, the junior said that the injury has not affected his performance. “Essentially being chronic tendinitis, it is only painful; oppose to leading to further more complicated injuries,” Dignan said. “During competitions, the adrenaline tends to block out most of the pain, allowing me to compete.”

Morgan Christman ’17 competed in the women’s 1-meter dive on the second day of competition. The freshman finished 19th with an 11-dive score of 368.50. She qualified for the meet after posting a score of 409.20 in a meet against Grove City on Jan. 18.

Dignan, Levy, Lewis and Allen will join fourteen of Denison’s male swimmers in the hopes of securing a national championship. The NCAA Division III Championship will take place on March 19-22 in Indianapolis, Ind.

Intramural sports: a fun way to blow off steam