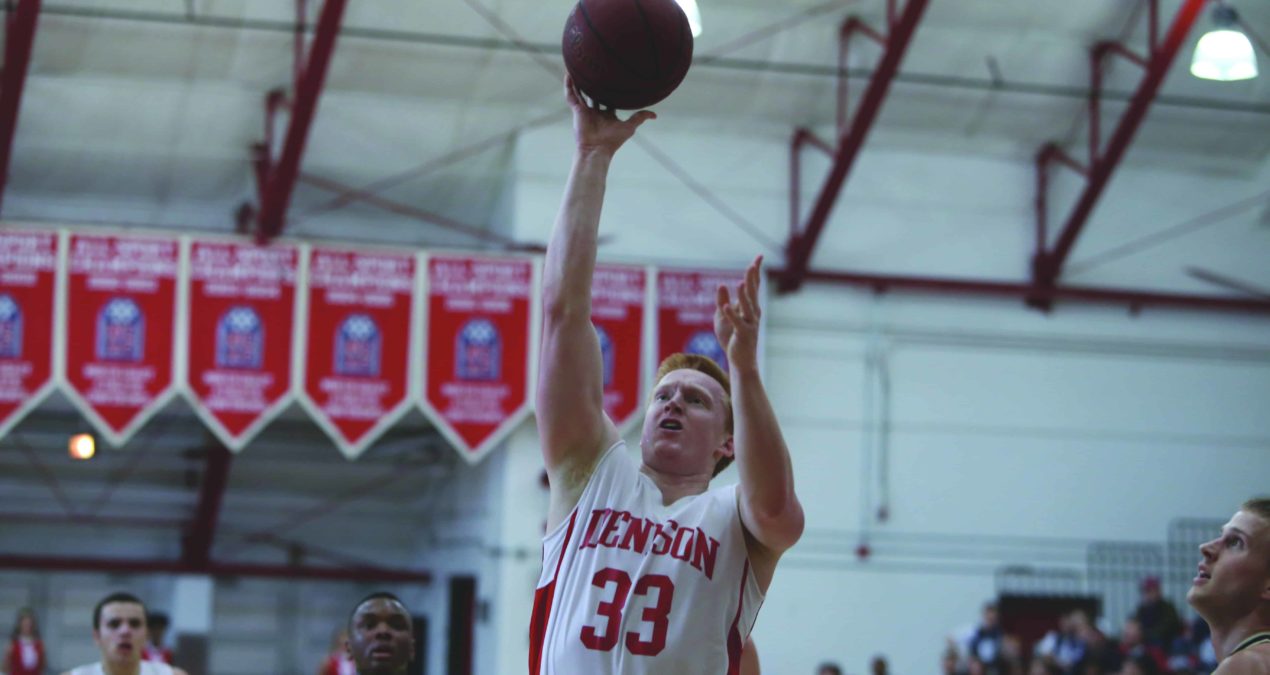 The 2013-2014 Denison men’s basketball season came to an end last week, as the Big Red lost to Wittenberg College 64-49 in the opening round of the NCAC conference tournament.

The team played well defensively as they forced Wittenberg to commit 17 turnovers. However, the Big Red struggled to stop the shooting attack of the Tigers, who shot 50 percent from the field.

Denison struggled offensively all night. “We didn’t shoot well,” head coach Bob Ghilonia said following the loss. “We shot 33 percent from the field, and you’re not going to beat many teams playing like that.”

Failing to shoot well seemed to be a recurring theme for the team all year. “When we shot 30% or better from three [point line], we were 10-4. That’s not even good, but we have some kids who can play and guard really well,” Ghiloni commented regarding the team’s overall play.

Briggs King ’15 registered nine points, six boards and four steals in Denison’s loss. “Even though we were successful in playing tough defense, it was difficult to reduce the gap of the lead because they were executing their offense at a high level,” King said.

Ghiloni is already looking ahead to next year and notes that in order to succeed in a tough conference, the team needs to improve in certain areas.

“We have to get more skilled. We have to become better shooters and improve our conditioning. That’s how we’re going to compete.”

Key players returning for the team are Briggs King ’15, Robby Weingart ’15, Brad Woolard ’15, Darius White ’16, John Cheng ’16, Matt Bauer ’17 and David Meurer ’17. Ghiloni is optimistic about next year’s team, saying, “We’re very excited about next year. Briggs King will be one of the guys looked at as a leader taking over for Alex Longi.”

The Big Red will lose Alex Longi ’14, the leader of the team, to graduation next year.

Ghiloni praised the Capital One Academic All-America second-team senior: “He’s just a great leader, on and off the court. He’s a regular guy who’s invested in this program, his studies and his fraternity.” Ghiloni continued to applaud his senior, “A lot of people like to just have the title of captain or president but Alex lived those titles. He was a great teammate and was never afraid to tell his teammates what had to be done because everyone respected him.”

“Alex has been a great leader for our team. He continues to prove why he is one of the best players Denison has ever seen,” King noted. Longi, a captain for two seasons, leaves Denison with a total of 1,090 career points, which ties him for 16th on Denison’s all-time scoring list. His departure will surely leave a hole in the roster.

“Losing Alex will definitely hurt our team. His versatility on the court will be nearly impossible to replace,” King added.

Despite the loss, the basketball team is excited about the future of the program. “I know our guys still have that fight in them to succeed. They want to get better. They want to win,” Ghiloni concluded.