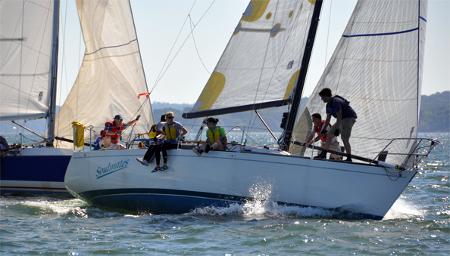 One of the last times that the Denison Sailing Club was on the water was when they placed third in the Cary-Price Interconference Regatta. After a long winter break, the club is ready to surge back into the water.

Logan Floyd ‘16, who has been sailing for sixteen years, has an unwavering passion for sailing and the club here at Denison.

“I think it’s a great program for Denison. The fact that it is a club sport allows a lot of kids who might be interested in the sport to come out and join. But, it also gives kids who want a more serious involvement in the program to be able to sail and race competitively with other colleges in our district.”

As of right now, Floyd is currently the Commodore for the sailing club. He organizes regattas (races), schedules events, and organizes the teamgatherings.

During the season, the club practices at the Hoover reservoir, which is about a 20 minute drive from campus to Westerville, OH, at the Hoover Sailing Club.

“We have a great relationship with the Hoover Sailing Club. They allow us to use their facilities and they have a great a vantage point to the reservoir as well,” Floyd said.

At the Hoover Sailing Club, the Denison team uses FJ and 4-20 boats. “Both FJ’s and 4-20s are two person boats, very easy to manage, and very straight forward.” Floyd added.

Floyd continued, “Most collegiate sailing allows you to get a background in basic sailing knowledge that you could really translate into any boat. You can learn one thing in an FJ and more or less it’s going to be the same in any other boat that you find yourself in.”

Once it gets warmer outside, the sailing club will start to organize regattas with neighboring colleges, like The Ohio State University. In fact, the Ohio State Sailing Club also practices at the Hoover Sailing Club.

“Hoover also allows OSU to practice at their facility, so we are constantly competing against OSU. And we focus on a series of regattas that are close to us, that we are able to be competitive at and we are also starting to move towards maybe travelling further,” Floyd said.

A big event that the sailing club goes to every year is in Larchmont, New York where they sail against other colleges.

“We sail big boats with other colleges and we all race each other out there,” Floyd said. As of right now, the sailing club is in their offseason due to the weather. During this time, the club tries to stay connected by scheduling workouts in Mitchell and hanging out with one another.

Logan Floyd reiterated that the Denison Sailing Club is open to people of all backgrounds and commitment levels. He encourages anybody interested to join the club.