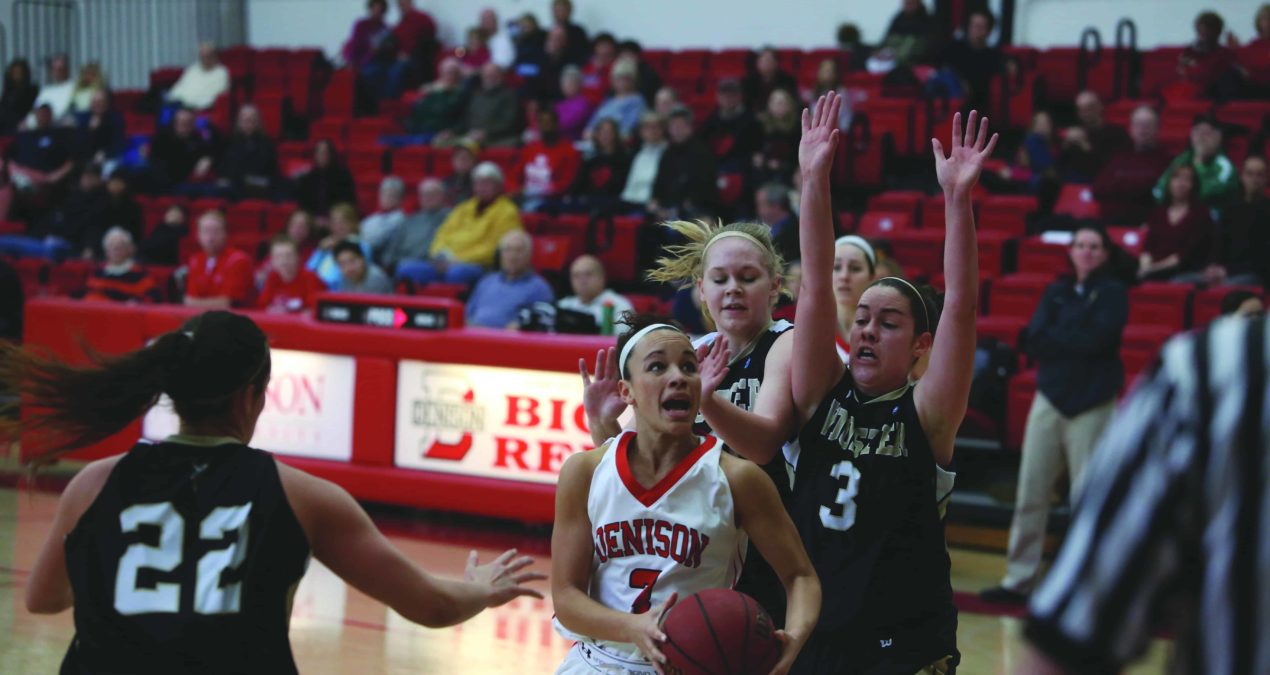 After riding a four-game win streak, the Big Red’s season came to a close in a 69-41 loss to the DePauw Tigers in the NCAC tournament championship game.

The loss concluded the season for Denison, while DePauw locked up the NCAC’s automatic bid into the Division III NCAA Tournament.

The loss ended a resurgent year for the Big Red. After posting a 13-13 (8-8) total record in 2013, the team ended the regular season with a 19-6 (9-5) record, and won two games in the NCAC tournament this past weekend. They earned a 60-56 win over the Allegheny Gators and a 67-57 win over the Battling Bishops of Ohio Wesleyan to advance to the tournament final against #4 DePauw, the defending Division III national champion.

Denison was led by Gretchen Staubach ‘14, who scored eight points in her final collegiate game for the Big Red. She leaves Denison with 645 total career points.

The 6’1” rookie enjoyed a breakout campaign this year for the Red and White. The Big Red can expect big things in the following years as she grows into an even more featured role.

Holmes broke the conference and school record for rebounds (394) and blocked shots (164) in a season in her first year as a collegiate player.

She also is currently leading all of Division III in blocked shots per game with an average of 6.1.

Holmes was named to the NCAC All-Tournament team after scoring 33 points, grabbing 54 rebounds and blocking 14 shots in three tournament games.

Joining Holmes on the all NCAC tournament team was Staubach, whose 19 points paced the Big Red in their semifinal win over OWU.

Despite coming up just short at the end, the season as a whole was something the Big Red could be nothing but proud of.

The club saw a six game win improvement from the previous campaign and had three separate four-game win streaks throughout the season, as well as posting victories over three rivals: Wooster, Kenyon and Ohio Wesleyan.

The team actually accomplished the impressive feat of beating every team in conference at least once, except for DePauw, the defending champ, or Wabash, who does not field a woman’s basketball team. Their style of play was also imperative to the success of the Big Red this season.

The Denison offensive attack could only be described in one word: balanced. Guard Candise Love ‘15 led the way with 11.7 points per game, followed by Staubach with 11.3 ppg, and Holmes, with 10.6 ppg.

The team as a whole scored 63.3 points per game on the season. They also weren’t afraid to get defensive, only giving up 54.8 points to the opposition per game.

Despite all of these feats, one of the most important was the discovery of young and talented players, who will help carry the Big Red again in the 2014-2015 season. Starters Holmes, Candise Love ‘15 and Mikaela Freundlich ‘16 return to a squad that is coming off of a 21-game season, and is loaded with young talent that is hungry to see the floor and compete in this conference at this level.

With another year of off-season training and working together, who knows who else will emerge into the fold and what good things will come the next time the Big Red takes the floor.