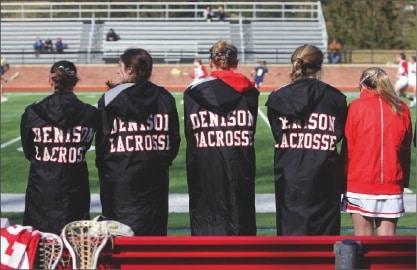 For first-year Coach Amanda Daniels and her squad, March means only one thing: lacrosse season.  This past weekend, the Big Red opened their season with a two-game weekend in Sewannee, Tenn. against the Adrian Bulldogs and the Sewanee Tigers.

Only six upperclassmen will occupy the helm, leading a roster that includes a whopping 18 underclassmen.  Despite relative inexperience, the ladies have no shortage of star power.  Molly Chapman ’15 and Whitney Powel ’15 will both return this season after each garnering first-team All-Region and first-team All-NCAC honors for their efforts in the 2013 season.

No doubt this year will see a marked contrast in playing style from previous Big Red teams. Daniels and her newly hired assistant Maddie Coleman will look to shake things up both on offense and defense, a change which the team will welcome after two fruitless NCAA Division III tournament appearances in the last three years.

“[Denison] didn’t necessarily have the season they wanted to have last year,” Daniels said. “They do have an established, winning culture, but we want to take it to the next level, not just getting to the NCAA tournament, but really winning some games in the NCAA tournament.”

Last season, a confident Big Red team entered the tournament after a one-loss regular season, only to cede the first and the last of their three games to the Ladies of Kenyon, despite strong performances from Allen and Chapman.

Notwithstanding their 2013 postseason showing, Daniels is excited to be inheriting what looks to be a strong squad.  “We started out right away talking about our goals for the year and where they wanted to see the team going,” Daniels said.  “[That day] they were also coming in and meeting the freshmen for the first time.  They were excited; there was a lot of energy in the room. They bring that kind of energy every day; it has been a lot of fun so far.”

Denison certainly looked energetic on Saturday and Sunday, kicking off the season with two solid wins against non-conference opponents.

Against the Bulldogs of Adrian College, the Big Red relied heavily, but not solely, on the more experienced ladies on the field. Chapman finished with two goals (one early in the first and the other early in the second half) and four assists, while Claire Ludlow ’17  stepped up with an impressive four goals on only five shot attempts.

Erin Keller ’15 showed flashes of dominance early in the match with a pair of goals to put DU on top 4-1, but Adrian came roaring back, scoring three goals in three minutes to cut the established lead to 6-5.  Three Big Red goals and a Bulldog buzzer-beater left the halftime score at 10-6 with Denison in charge.

After this point, Adrian continued to slip, allowing the Big Red to string together several goals at a time between every single Bulldog score on their way to a 13-point second half.  Adrian scratched across only six scores, thanks in part to the three save effort of DU goalie Laura Van Horn ‘16, as they fell to a 1-1 record in their 23-12 loss.

Sunday’s match against Sewanee was a much less high scoring affair and a closer game altogether.  The Tigers struck first with a 2-0 lead, but the Big Red answered with two quick goals by Chapman and Lauren Adams ’14.  After two more Sewanee scores, the rest of the game was defined by a series of advantageous opportunities embraced by the Big Red squad in response to Sewanee penalties.  Heading into halftime, the Big Red was sitting comfortably with a 9-4 lead over the home team.

To start off the second half, Keller capped off an 8-0 DU run that was broken only after five more minutes of play.  The Big Red momentum was enough to carry the team past any possible Tiger rallies and, after an impressive defensive performance, DU came back to campus after a 14-7 win and a 2-0 opening weekend.

Daniels has every reason to be proud of her ladies as they head into their third match next weekend against Vassar in Colorado Springs, Colo.