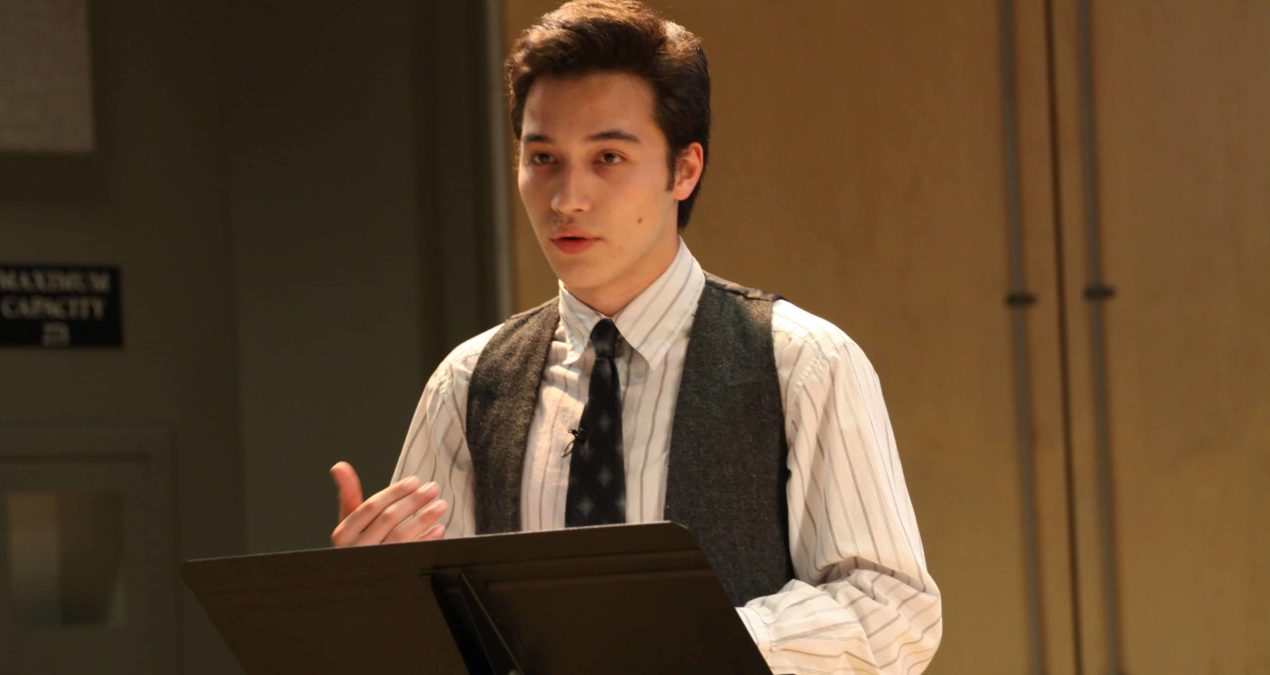 For many Americans, their only interaction with the French language may come from a high school class or a trip to New Orleans. However, Jeremy Kleven ’14, under the tutelage of Associate Professor Christine Armstrong, has developed a passion for the language.

This sparked an interest in French theatre, which Kleven has undertaken as his senior research.

For the past year, Jeremy has been translating the Andre Gide play Les Caves du Vatican—a passion inherited from Armstrong, a scholar of the French Nobel laureate.

During this process, Kleven has gleaned many important lessons about the sometimes frustrating, but often rewarding task of a translator.

The first issue at hand was to “remain loyal to the author’s voice, but allow it [the play] to ring true to contemporary ears.”

That was difficult, given the text from which the play was adapted was penned in 1914 – “the centenary of this talented man’s farcical work, and so a very special year,” says Armstrong.

However, Kleven managed to circumvent this difficulty with tricks of the trade, so to speak. For example, he “tied many of the translated words to individual characters,” and in so doing made both the character and the dialogue resonate to a greater degree.

So the character of Margueritte, a snobbish and conceited member of the bourgeoisie, used the word “nevertheless” when being contrarian, as opposed to other words—‘however,” “but,” etc.—which would have also translated correctly from the original French.

Furthermore, preserving “the hidden irony in the play” was another key goal of Kleven’s. When presented with the necessity of translating “rescue dog” from French to English, he chose to phrase it as “St. Bernard” instead, as a “subtle wink to any Guide fans out there” who knew that Bernard was the name of the protagonist from his only novel.

All in all, the main lesson Kleven conveys is that “while the literal text is important, the meaning behind it is more.”

Indeed, it seems as though Kleven’s entire life has informed his current project. Born in Mexico with Spanish as his native tongue, he moved to Bellville, Ontario as a young child.

Once there, under Canada’s policy of official bilingualism instituted in the 1970s to convince Quebecois to remain a part of Canada, Kleven was introduced to the French language.

Even after his parents moved to Maine (where, interestingly enough, French is spoken natively in the farthest northern reaches bordering Canada), he continued his French studies.

Eventually, he came to Denison with the idea of minoring in French in mind, but after an “easily convincing conversation” with Armstrong, he coupled French with his economics major.

Kleven has already been treated to the opportunity to present his translations at a gathering of Gide aficionados at the New College of Florida over spring break.

And in what some of his fellow French students must have considered quite a boon, a few were invited to help Kleven perform the scenes.

In 2016, Kleven is hoping to return to Denison to witness the convergence of Gide scholars on Denison’s campus. But in the meantime, he is passing the torch of his unfinished work to a still-unnamed rising senior; somebody who will surely have large linguistic footprints to fill.