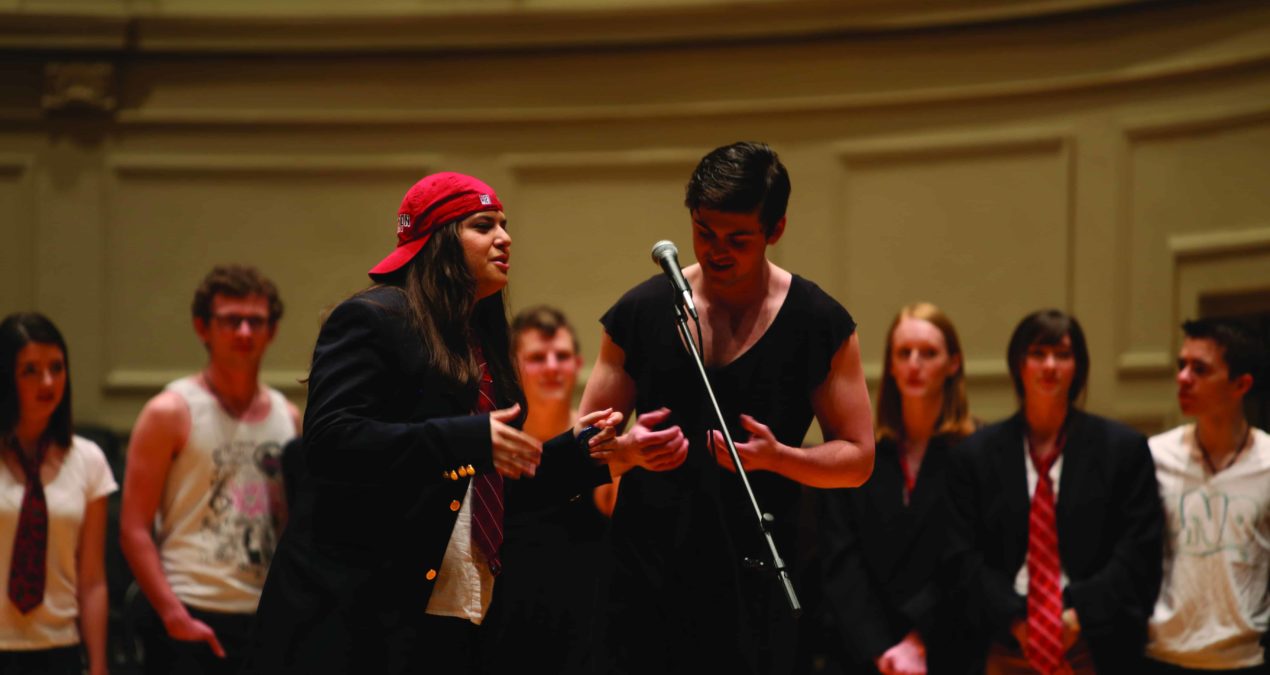 LNO and Hilltoppers team up for “Switcheroo” concert

Despite a freakish wintry storm happening outside, the Hilltoppers and Ladies Night Out managed to bring music and laughter to Swasey during their annual Switcheroo concert on Saturday.

The “switcheroo” comes from the switching of repertoires between the groups—and attire, as the women wore Hilltoppers’ blazers and khakis, while the men donned black dresses.

The men of the evening sheepishly performed songs from LNO’s catalog (not always knowing the words), which included “Can’t Take My Eyes Off You,” and “Landslide,” while the women tried their hand at Hilltopper favorites like “Faith,” “Walking in Memphis,” and “Sunday Morning.”

Some performances were excellent despite the unfamiliarity; Danny Webb ‘14, of Bexley, Ohio, managed to pull off a solid rendition of Ingrid Michaelson’s “The Chain.”

The highlight of the evening was decidedly from the enthusiastic Kyle Gordon ‘14, of Katonah, N.Y., who performed “You Gotta Be” in a particularly small black dress.

Before singing he announced that the concert “was punk rock as f***” and proceeded to gyrate on stage, making up his own words as the microphone (which had been subpar for much of the night) crackled in and out.

Gordon’s waist was eventually covered up by a Hilltopper’s jacket; his hip-swinging moves may have been deemed inappropriate had they gone much further.

Wilson finished the night by leading a serenade of “Only You” (a Hilltopper standard), calling a gentleman up from the audience to be surrounded by both groups on stage.

The show was fairly brief (maybe about 40 minutes), but well-received by the crowd. “It was definitely an experience,” said Rachel Auerbach ‘16, of Mount Horeb, Wis., with a smile.