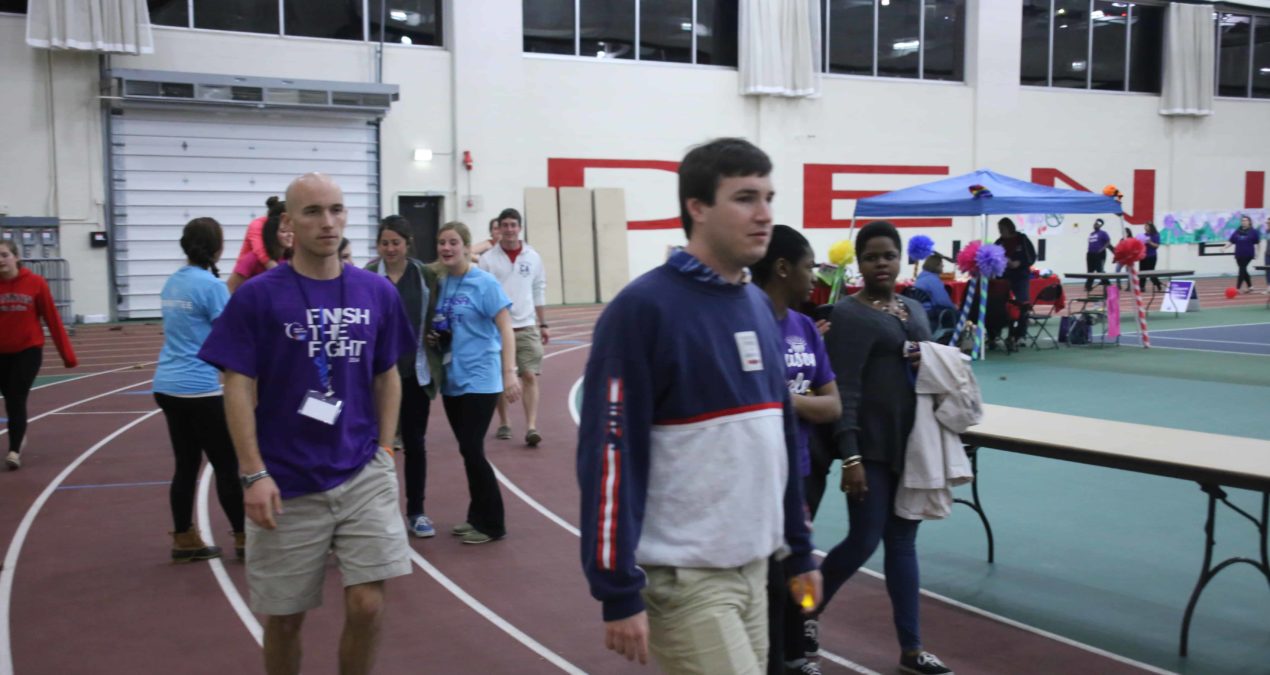 Relay for Life raises over $21,000 for American Cancer Society

Mitchell Athletic Center was filled to the brim with people who took time out of their weekend to take a stand against cancer. On April 11-12, Denison held its annual Relay for Life event, which raises money for the American Cancer Society.

The event has raised over $21,000 so far this year, and will continue to raise money and accept donations into August.

The overnight event began at 6 p.m. then continued until the next day at noon.  Many teams stayed overnight and took turns with one another walking around the track.

There were 32 teams in total, comprised of students, Denison employees, and Granville  and Licking County residents.  Denison had 28 of its own clubs and organizations participate in this event.

The evening started off with the national anthem performed by Molly Toohey ‘15, of Libertyville, Ill.. The first lap around the indoor track began with cancer survivors’ “Survivor Lap,” walking to Pharrell’s “Happy.”

Chipotle also catered a dinner for the team which raised the most money, with this year’s prize going to the Relay Committee Team.

Relay for Life has spread both nationally and internationally in its 29 years. For the past three years, major DJs have performed at Denison’s event, which has helped increase popularity and attendance, with Super Mash Bros performing for this year’s concert. Ephraim Abocado ’14, adds some sass while on stage for the “Amateur Drag Show” hosted by Outlook during Relay for Life.

Along with Super Mash Bros were many other performances including opening act Beach Season, the Big Red Dance Team, Denison Dazzlers, LNO, and a drag show by Outlook. Sam Wallace ‘16 from Potomac, Md., also shaved a year’s worth of beard for the cause. For participants that were a little groggy the next day, a morning swim at the Trumbull Aquatic Center was offered.

According to event co-chair Caitlin Ghiloni ‘14, from Pataskala, Ohio, “the event as a whole went well and hopefully campus participation only increases over the next couple of years.”

Eli Carballo ‘14, of Washington D.C., served as the online chair for the event, giving updates and promoting activities through social media.

“It was clear that cancer, in one way or another, has personally affected a lot of us here at Denison and that through Relay we’ve been able to come a long way,” Carballo added.

“I really hope that Relay can continue to grow on campus so that we can help ACS eliminate cancer for good.”