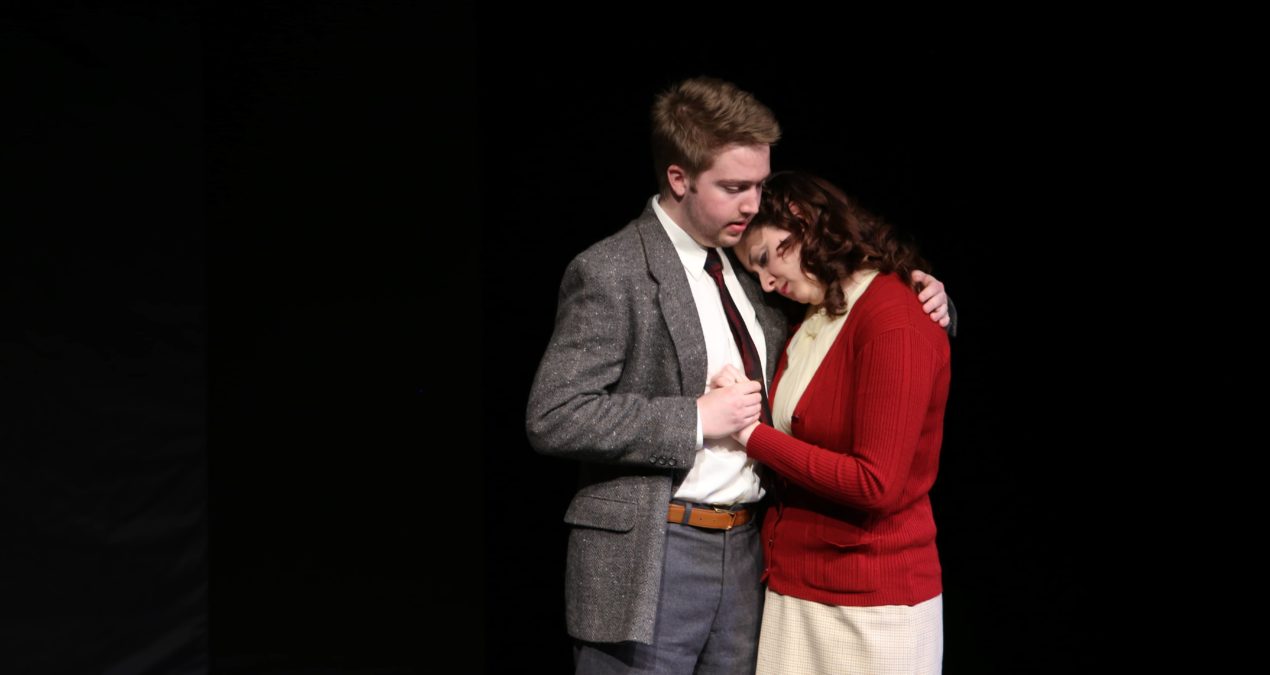 At this year’s 2014 Denison Theatre Spring Thing, a litany of talent and creative engineering was placed on full display, coming from both students and faculty.

First on the playbill was Associate Professor Peter Pauze’s “I Think They Moved to Buffalo.” Centered on the decades-long married couple Arthur (Nick Van Atta ‘17) and Alice (Rhiannon White ‘17) reflecting on the mistakes that led them to their original vantage point, the play manages time interestingly to paint a series of flashbacks of buoyant and hopeful Arthur and Alice that, through undisguised interaction with their modern counterparts, convince the old folks of the mistakes made along their path of marriage and how to rectify them.

The last scene then cuts to a repetition of the first, repeating it verbatim, but with a newfound serenity in place of the quarrelsome argument of our couple.

“Buffalo” was a crowd favorite, with several lines – from Arthur’s staccato reading of the obituary to the declaration “I am no flashback tamperer!” – inciting uproarious laughter.  But the plot ended with a predictable resolution almost akin to a Full House episode – controversy assuaged by happiness in the end.

Next came John Wooten’s “The Role of Della,” directed by Assistant Professor Mark Seamon.  In contrast to Pauze’s piece, scarcely anybody in the audience saw this play’s final punch coming.

Introduced to a cruel and wanton talent scout forcing a woman auditioning for the namesake role to do the most irrelevant tasks (tell a story, sound Spanish but not speak Spanish, etc.), we only discover in the play’s final seconds that the talent scout, having arrived at the venue early, had been engaging in a deceitful game of misdirecting fellow Della contestants the entire time while coveting the role for herself.

Sara Blike ‘15 and Tara Foster ‘14 receive kudos for their respective roles as the ends-justify-means Emma and the subservient Elizabeth.

An excerpt from Associate Professor Mark Evans Bryan’s forthcoming “The Remotest Indies of This Living Earth” followed “Della.” While the rest of Bryan’s manuscript went unperformed and thus robbed us of much context, the difference was more than made up for by the singular talent of Emma Skorepa ‘15.

Fidgeting around on a lone table, Skorepa delivered a monologue that left me unsure of whether she would be more comfortable prophesying at Speakers’ Corner or straitjacketed in the loony bin (and the inability to discern surely speaks to her ability to project more than one ethos).

While many were unsure of the precise meaning behind her words, many also left feeling as though they gleaned something out of it all.

Finally, the most thematically complex performance was Lynn Nottage’s “Poof,” directed by Assistant Professor Cheryl McFarren.  When Loureen’s abusive husband dissipates in a cloud of dust, she is confronted with the conundrum often confronting battered women – the desire to be free of fear mixed with a loyalty to the good memories, if few and far between.

It is only through the intervention of Florence (Latasha Hoard ‘14) that Loureen (Kirstie Rodden ‘16) finds the strength to remorselessly brush her husband away (literally).

But this is not without irony, for upon inviting Florence to stay for dinner, Loureen hears her exit with the words, “Edgar won’t stand for that.” – speaking to a compelling character with the strength to help her mentee, but also while confronting the same demons her protégée had just overcome.