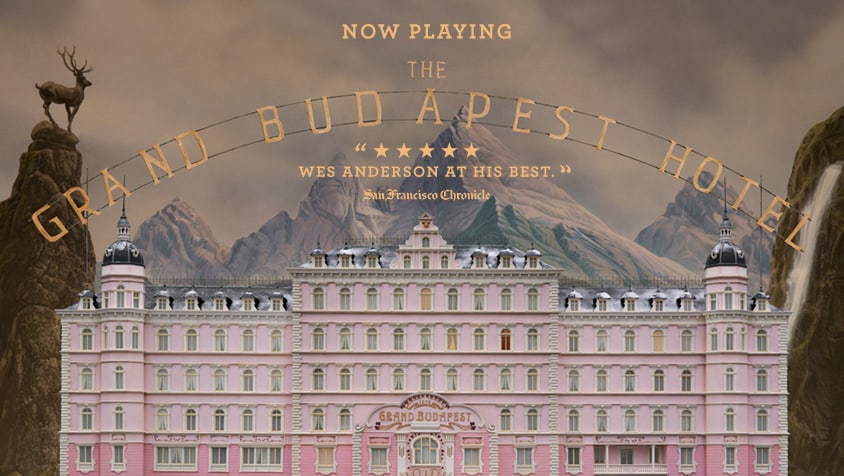 Dioramic, symmetric, and aesthetically meticulous are some of the primary pinnacles of Wes Anderson’s artistic style. Over the course of his now eight-film directing career, Anderson has used this idiosyncratic vision to establish himself as arguably the most discernable filmmaker of his generation.

Yet, the true task that lies with a director who remains strictly loyal to a certain form of filmmaking is burdensome: the ability to provide refreshingly original ways of storytelling. With The Grand Budapest Hotel, Anderson has yet again succeeded in adding nuances to his delightfully eccentric world.

Told from the perspective of the elder version of Zero Moustafa, manager of the Grand Budapest Hotel, the story encompasses his times as a dutiful lobby boy under the oversight of the prestigious concierge, Gustave H. (Ralph Fiennes).

Zero (Tony Revolori), aptly named for the loss of his family and his lack of education and experience, becomes a vital resource for Gustave when Madame D. (Tilda Swinton), a wealthy countess, bequeaths a precious painting to Gustave’s possession.

Envious of Gustave’s fortune, the children of Madame D., played by Adrien Brody and Willem Dafoe, are determined to use any deadly tactics to recover the artwork.

Similar to Anderson’s previous work, the direction TGBH follows is heavily motivated by plot. The intricate camerawork, quirky language, and charming dark humor contribute to the extravagancy of an Anderson production. Nonetheless, when Anderson is at his best, it is when these factors meld harmoniously with empathetic characters.

A captivating performance by Fiennes, Gustave places as one of the most memorable of Anderson’s characters, relatable to Max Fischer of Rushmore or Royal Tenenbaum of The Royal Tenenbaums. With Gustav’s mentorship of Zero as a central point of the narrative, TGBH becomes a pleasing combination of visual fireworks and humane undertones.

During 1932 in the fictional state of Zubrowka is the setting of the film; the backdrop of the most escapist Anderson film to date. The flamenco guitar scoring, uniform color scheme, and careful set design fully accomplish an immersive quality for the viewer.

Whereas Moonrise Kingdom hinted at a foreign land, TGBH’s arena is definitively unrecognizable. This is a newfound extreme for Anderson, an endeavor he should insist on pursuing.

If one of the great auteurs of American cinema can continue to refine the boundaries of his already distinct technique, then I anxiously look forward to more of the same.