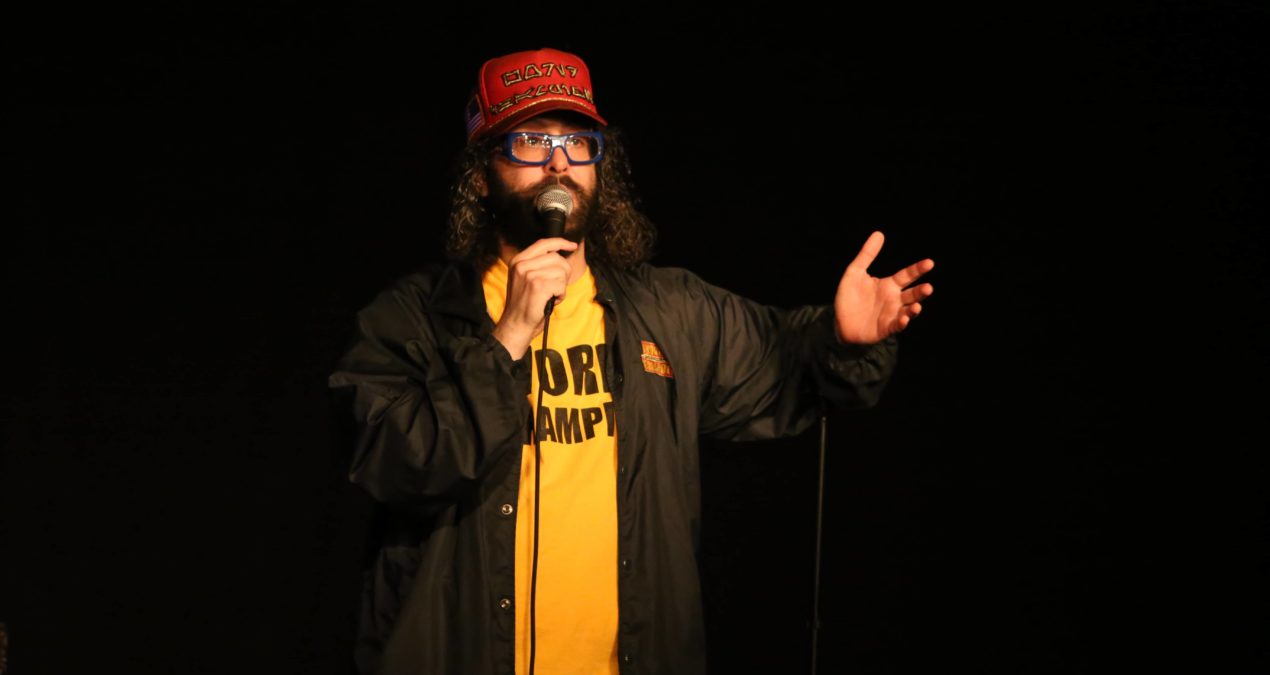 Decked out in his “World Champion” garb, which included a windbreaker, t-shirt, and trucker hat (with the phrasing in “Star Wars language”) comedian Judah Friedlander took the stage for a raunchy evening at the Roost on April 25.

His performance capped off the Aestavalia activities for the day, and was noticeably well-attended in comparison to prior UPC comedians.

Friedlander, while not necessarily a household name, is best known for his role as Frank Rossitano in the T.V. show 30 Rock. He is also known for his collection of trucker hats with absurd sayings (these include “Beverage Expert,” “Beef Ravioli,” and “World Champion” in a variety of languages).

As part of his self-promoting schtick as “Campeon del Mundo,” Friedlander riffed on his “karate skills,” as well as his plans for America should he become president.

He fielded loads of questions from the audience concerning major political and social issues (all of which he managed to somehow make hilarious).

When asked about marijuana legalization, Friedlander quipped “I think all drugs should be legal. But I’d start with [legalizing] heroin, not marijuana. Maybe crystal meth.”

Friedlander also remarked on how “far” America has come, citing “twins’ rights” and claiming “it used to be legal to kill a twin because they’d be like ‘There’s another one of him!’” In addition to his many “accomplishments,” he claimed his true passion was writing Judy Blume sequels.  For example, a sequel idea for Blume’s popular book Are You There God, It’s Me, Margaret is “Yes, Margaret, I’m Behind You,” and he announced “plans” for a prequel to Psycho titled “That’s a Weird Kid.”

Friedlander’s humor was so quick and his jabs at modern society so sharp it was often hard to keep up with him. He managed to keep the audience entertained throughout his performance and called continuously on crowdspeople to answer his questions about Denison, as well as receive some of his good-natured heckling about their majors or hometowns. One student told Friedlander he hailed from Greenville, S.C., to which Friedlander replied “Wow, from Greenville to Granville? Thought you were being clever?”

While some of Friedlander’s humor was decidedly dark, the crowd seemed to love much of his performance, and it was hard not to laugh at (and with) his sarcastic, slovenly demeanor when he proclaimed half-heartedly “I’m the World Champion.”

“I really enjoyed it! He’s got a deadpan sense of humor, which I like,” said Jordan Wilson ‘15, a communication major from Rootstown, Ohio. “I appreciated how much he interacted with the audience.”

“He was very personable and in touch with the audience. He kept everyone laughing the whole time!” added Julie Jolly ‘17 from Grinnell, Iowa. “I thought it was so cool that he came to Denison and took so many questions from the crowd.”