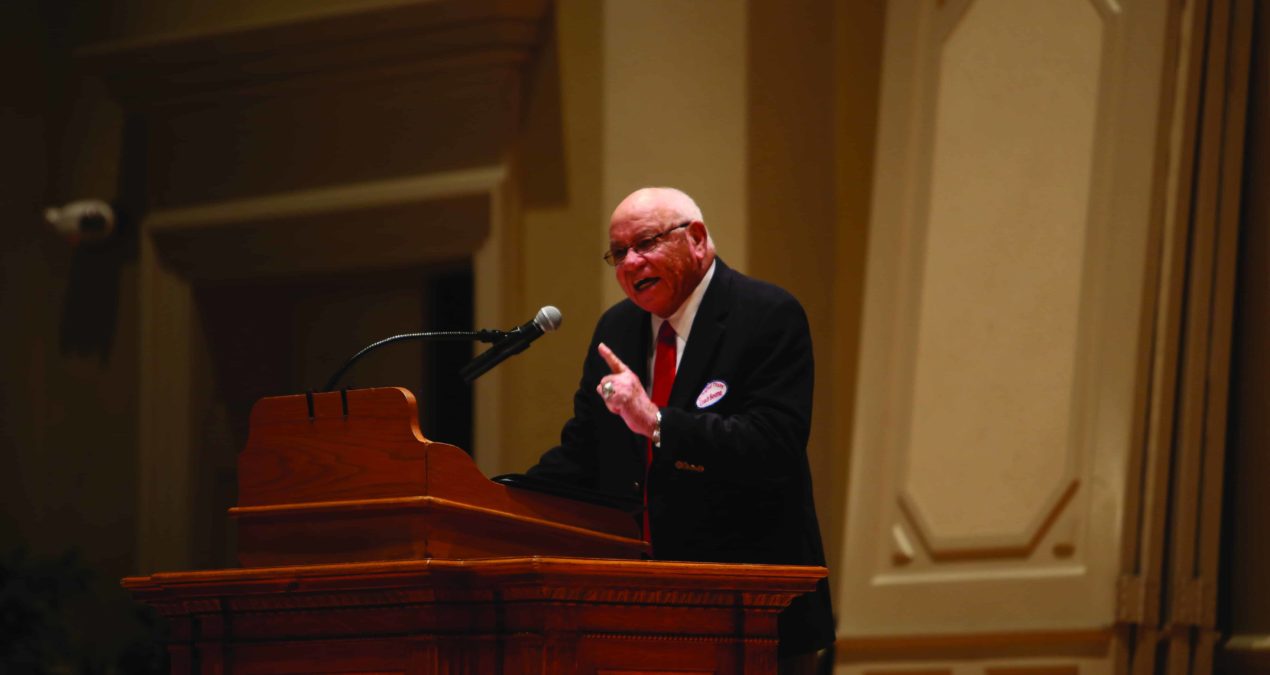 Herman Boone stood before an integrated crowd once again, to give another one of his influential speeches. But this time, he was not in a high school football locker room. He was, intstead, in Swasey Chapel on Wednesday, April 9.

Herman Boone was the coach of the famous Titans who performed extraordinarily well on the field after T.C. Williams High School, in Alexandria, Va. finally integrated African-American students into their halls, 43 years ago.

The United States still struggled with racism and segregation, and the town did not take this integration of its school, and even more so its football team, very well.

The 2000 Disney film “Remember the Titans,” tells the story of Coach Herman Boone, played by Denzel Washington, and his desire to bring together the Titans, despite the racist environment of the nation at the time.

Students who attended the speech found both his stories and speaking skills to be powerful. Quenton Richards ’16 said, “I was really impressed with how well Coach Boone carried himself. His confidence was definitely a big part of his success, and it really motivated me to carry myself with confidence and always believe in whatever I’m doing.”

Boone’s success as a speaker also impressed Ellen Mullen-Jayes ’16: “He has a lot of powerful knowledge and is great at sharing it.” Mullen-Jayes continues, “I think it’s pretty amazing to think about how important a role he played. It stood out to me when he described the specific moments when he saw his team changing and coming together, as the moments could easily have been overlooked, but he realized how important they were.”

The speech did highlight some embellishments the movie made. Boone never woke the team up at 3:00 a.m. to go run to Gettysburg, although the team did tour the battlefields while they stayed at Gettysburg College.

Also, Boone laughingly claimed that every time he gives a speech, Sunshine calls him and begs him to tell everyone the he did not kiss Gary like the movie depicts. Another major change is that the movie shows someone throw a brick through Coach Boone’s window, but in reality, someone threw a toilet into his house.

Although some events from the movie were slightly embellished, the importance of this integrated team was very real.

Boone’s speech mixed laughter with more serious topics, namely determination and tolerance. Cassie Fay ’16 said, “He had a lot of funny stories about football and the Titans, but he also had a lot of insight about hard work, teamwork and success that pertained to life off the field.”

In order to encourage students who are overcoming obstacles, he told the audience, “The world is waiting for you to take the plunge for what you believe in.”

The main lesson in Boone’s speech taught the necessity of tolerance to make a successful community. Although his story happened over four decades ago, the concept of acceptance is still in turbulence today.

Boone argues in favor both racial acceptance and a broad acceptance of everyone who has the smallest difference in beliefs. He believes that the source of the Titan’s success, on the field and within their community, was their eventually acceptance of each other as human beings. He argues that everyone needs to play like Titans in their everyday lives, and understand that acceptance is what made that 1971 team undefeatable.

Art: Autumn on The Hill