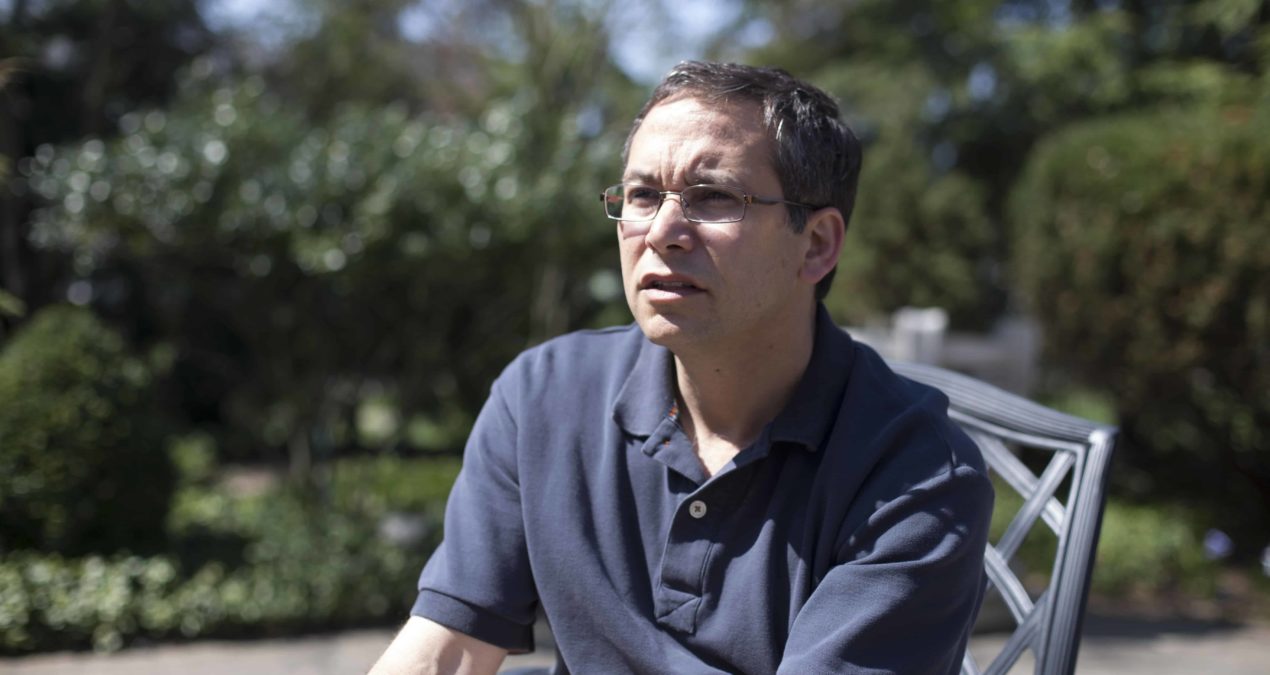 In the fall of 2012 Adam Weinberg was driving to Logan Airport in East Boston to fly to Morocco when he got the call that he would become the twentieth president of Denison University.

The search process for replacing former president Dale T. Knobel started almost two years ago —and Weinberg remembers not being interested when the search consultant called: “I was really happy at my current job,” he said in an interview at Monomoy Place, the president’s manor.

That job was president and CEO of World Learning, an international education, development and exchange organization.

“I spent a day here with no one knowing who I was,” said Weinberg, who, along with wife Anne, was impressed by the campus and the people they met on the Hill.

But Weinberg is no longer an anonymous visitor to Denison. With his first year as president closing, the Bowdoin- and Northwestern-educated sociologist has clearer ideas for his future plans at Denison.

Some of those plans include developing campus infrastructure, while others center on developing student life.

For Weinberg, the key to change is simple: “You have to do multiple ordinary things differently that bring extraordinary outcomes,” he explained.

This year, racial issues rose to the forefront when several student groups expressed dissatisfaction with social culture at Denison.

In December of 2013, the Black Student Union received what they describe as “propaganda” letters that contained racial microaggressions toward President Barack Obama and Muslims.

In March, La Fuerza Latina’s proposed social space seemed to stand in the shadow of placing a bar in Chamberlin.

Ruby Montesdeoca ‘14 wrote in an op-ed to The Denisonian, “I am bothered when most of the rhetoric we encountered, on behalf of the DCGA senators, indicated being more concerned about drinking than caring to help a marginalized community.”

These events culminated in the creation of a Facebook page, “We Too Are Denison,” where students shared their frustrations surrounding race, gender and sexuality issues.

As Weinberg stated, “We want to acknowledge it, listen to it, and invite them to the public square.”

He says that we have to “reinvent” what the public square is at Denison.

One option is having a “State of the College” speech at the beginning of the semester, where student leaders from different parts of campus would talk about issues at Swasey with members across the Denison community.

After graduating from Bowdoin in the ‘80s, Weinberg took a year off to travel Europe before returning to the states to work for a congressman in Washington D.C.

“I thought I wanted to practice public interest law,” said Weinberg. But a year on Capitol Hill helped him realize that law wasn’t his calling.

This year, Denison has partnered with two big programs: Summer on the Cuyahoga and Koru.

Summer on the Cuyahoga provides internships across a plethora of fields in the Cleveland area, and boasts Yale, the University of Chicago and Ohio Wesleyan as partner institutions.

Koru, on the other hand, seeks to give college graduates and soon-to-be-graduates job training in a three-week program.

According to the Koru website, participants can expect to receive coaching by executives, access to Koru’s employer network and a guaranteed interview with one of Koru’s employer partners which include PayScale, REI and zulily.

One of Weinberg’s key goals is to strengthen the self-governance of students. He said, “the campus should be a design studio for students to practice their liberal arts skills.”

As former dean of students at Colgate University, Weinberg has had his fair share of experience addressing controversy.

During his tenure at Colgate, Weinberg remembers when a drunk driving accident took the lives of five students.

This semester, the passing of David Hallman ‘14, combined with past experiences, made Weinberg realize that “you deal with all forms of grief with community.”

Another issue that colleges around the country are addressing is the value of Greek life.

In a 2003 interview with The Colgate Scene, Weinberg said that “the fraternity/sorority issue had driven a wedge between faculty and students in ways that are unhealthy for our students and institution.”

The answer for Colgate, Weinberg reflected, was for the fraternity houses to be college-owned. Denison made Greek life non-residential and his own alma mater, Bowdoin, eliminated it altogether.

Today, Weinberg says sorority and fraternity life “provides a real home for certain students.” Weinberg says he believes Greek-affiliated students are responsible enough to self-govern: “We’ve got to have high expectations and we’ve got to provide support.”

From his Monomoy home, Weinberg has a great view of South Quad, as well as some ideas for how it can be improved.

He says that he has a vision of “creating a real arts quad.” That entails putting in a cafe and replacing Burke Hall with a new theatre building. Weinberg says that students have also talked about an amphitheater.

Now that Denison owns the Granville Inn, Weinberg mused, “Are there ways to make it a focal point for students?” In his mind, the Inn has the potential to expand social spaces on campus.

Weinberg is also looking to push Denison into the national spotlight. He said that Denison’s Midwestern humility “doesn’t allow us to feel as proud as we should.”

He said that one of the most important things he’s learned at Denison is that “students are capable of taking the lead on big issues.” and he was pleasantly surprised by “the commitment of faculty to students.”

For this new president, his passion is clear: “I don’t think there’s a stronger liberal arts college in this country.”