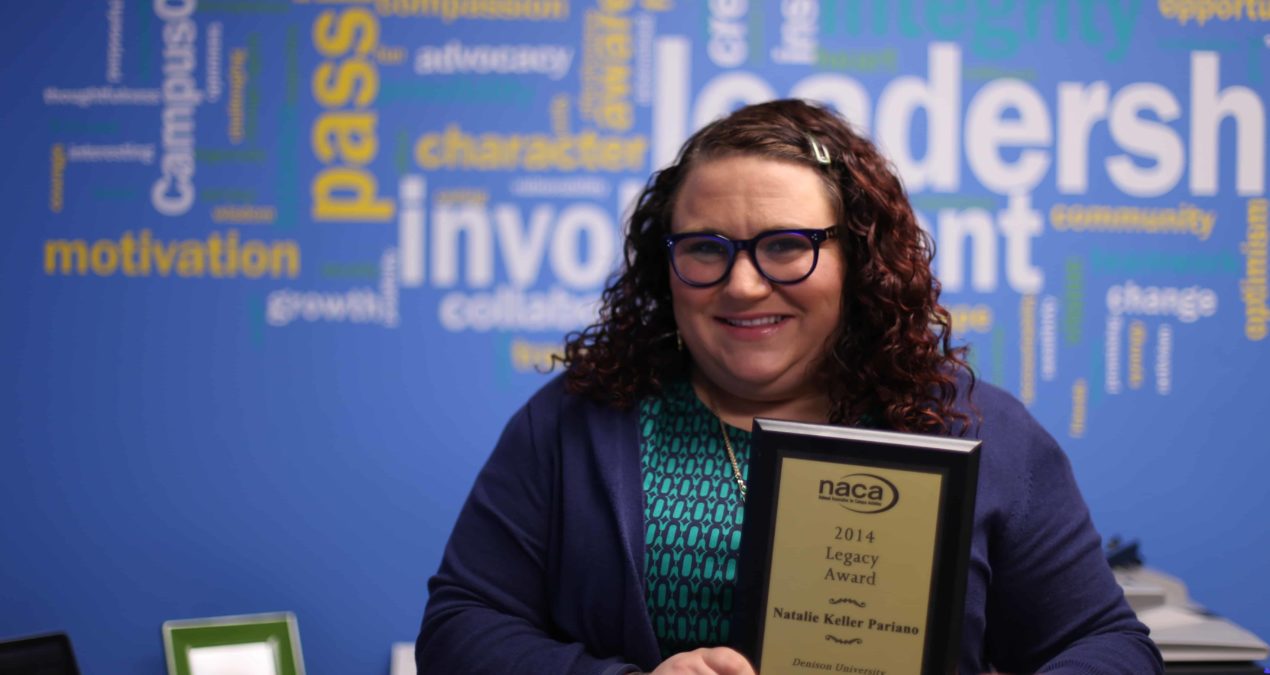 At Denison it seems every other person you talk to is involved if not leading some organization. Whether it be a fraternity, sports team, or club – the fact is Denisonians like to be active on campus. But, how does this happen? Do the collegiate gods wave some imaginary wand and grant every person with a passion a budget and perpetual guidance throughout their time at Denison? It is in fact the CLIC office that helps students participate in established organizations or start their own.

Natalie Pariano, the Director of Campus Leadership and Involvement, is a major player in allowing organizations to be student run yet also have access to resources for assistance.

She is a graduate of Ohio University and was involved in various campus jobs during her time there. After earning her Masters in Education she had a vision for her future – to help every student reach their fullest potential.

Since beginning at Denison seven years ago, Natalie has done just that. When she began, there were only two or three leadership programs per year and now there are eight or nine. She attended Leadershape as an undergraduate as well! Now she is the one planning the winter and spring Leadershapes for Denison students.   The first Leadershape for Denison was thirteen years ago and the interest in the program has only grown. One hundred and forty students applied to the week-long program over winter break which showed the need for another session over spring break. With the growing interest, Denison can currently boast that six percent of graduating students have participated in the program geared to creating better leaders.

This february, Natalie won her most recent award, the Legacy Award, from the National Association for Campus Activities at their Boston conference.   The Legacy Award was created in honor of NACA’s 50th Anniversary. The award provides a year of NACA professional development opportunities for up to two NACA leaders who have the potential to serve the Association at a significant level for a significant period of time.

Natalie earned this award because of her dedication to see students succeed, her future personal volunteer aspirations with NACA, and a letter of support from Denison. Natalie has been continually striving for excellence.

Another important part of the CLIC office is the “CLIC-ers” (the student staff of ten). Students from every year are considered for the jobs in the office and many are eager to work in such a motivated environment. A senior staffer said “CLIC is the best job on campus.” Another student, Liz Zach, describes “Natalie is the mother hen and CLIC is the family.” The atmosphere in the office is one of fun and efficiency.

An annual production of the CLIC office is the involvement fair. It can be overwhelming with all of the different clubs competing for your attention with incentives of t-shirts and candy. That is why this year there was a map of where each organization was and a handout with reflection questions. One of the pieces of advice Natalie would give to students would be to get involved at a healthy level.

The goal would be to find just a few things you are passionate about. When you focus your energies on one or two activities that is when you really flourish in them. Involvement in activities also does not mean solely in CLIC, but attending any events.

If you want more opportunities for leadership and for campus involvement, going up to the third floor of Slayter and visiting the CLIC office is the best first step you can take!

Corrections have been made from the print version.