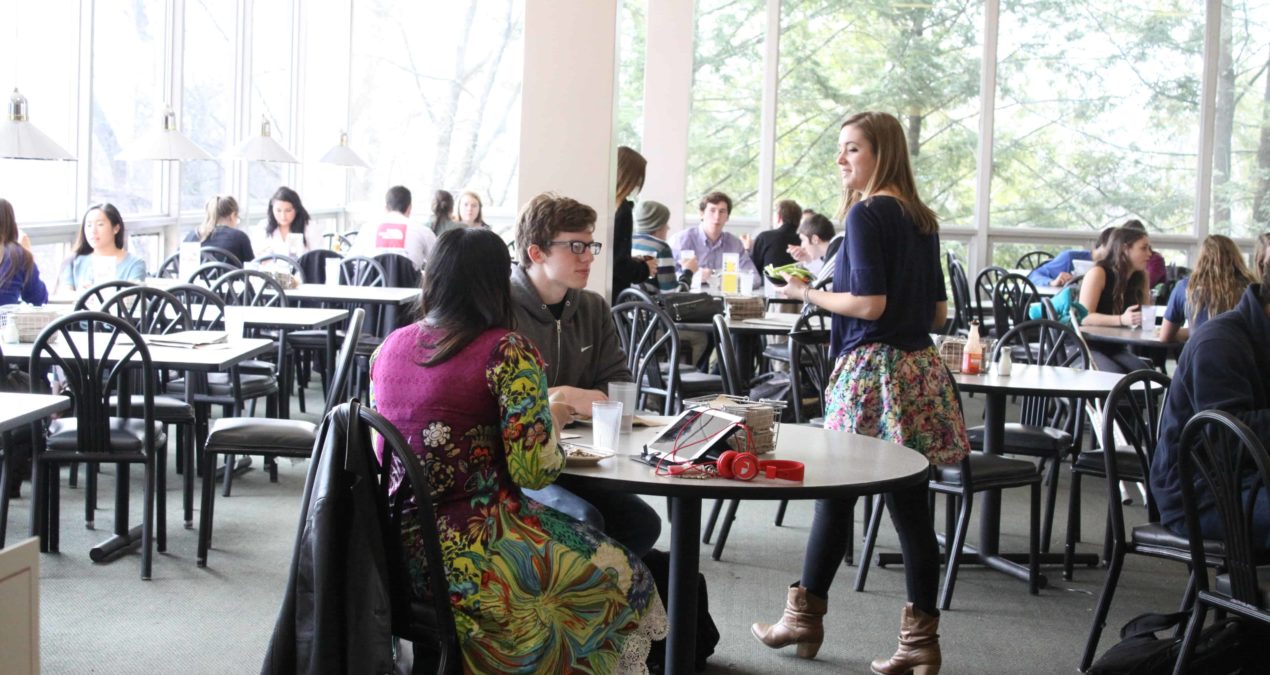 Max Collins, ’15 of Stamford, Conn.works 15 hours a week in Curtis.

Max Collins, ’15 from Stamford, Conn., tells The Denisonian what it’s like working at Curtis.

Max: I really like it. Everyone back there is nice. It’s a lot of fun. The students are generally really nice. I get a lot of ‘Hi, how are you?’s or at the very least most of them say ‘please’ and ‘thank you.’

M: The cleanup is usually bad because some students are disgusting. Sometimes there is food all over the tables and the floor. People will leave spilled juice and stuff like that. Sometimes serving can get kind of stressful on days when we have something that’s really popular like chicken parmesan. It’s a constant stream of kids and I don’t get any down time for four hours.

How many hours a week do you work?

How did you get the job?

M: A friend of mine told me about it. We applied and I ended up getting it, not her. I felt bad for stealing the job but she’s fine with it.

M: It wasn’t bad. I handed in my application and a week later I got a call. I came in for a first interview and it was mostly a get to know you type interview. The second interview was more formal and informational. Then I had to go to an orientation where I learned the rules of the land.

M: I punch in a half hour before the dining hall opens. I make sure everything is clean, prepare and put up the food. I’m serving food during the big rushes at dinner and lunch time. After the rush, I’ll go see who I can help. I’ll clean the counters and tables. When the dining hall closes, we make sure the leftover food is taken away to charity. We clean our work stations, vacuum and go home.

Gabby Vecchio, ’16 from Cleveland, Ohio opens up about her time working for both Sodexo and Bon Appetit. G: Well, last semester I was working 27 hours a week. So I was pretty much full time. I’ve been trying to get my hours reduced but they are understaffed. I was able to buy a car with the money that I made.

What’s been some differences that you’ve noticed between Sodexo and Bon Apetit?

G: I think most people don’t realize how sustainability focused Bon Appetit is. They’re really picky and concerned about composting and sorting. I think it’s very worthwhile. They try and get whatever they can from local farmers too.

G: It’s very friendly. Most people are there because they want to be and they enjoy working there. I like working when I’m in contact with the students like serving in the main line.

G: Probably just waiting around when it’s slow. It gets kind of long sometimes. Usually at dinner it’s not a problem but after 7 it gets kind of slow.

How did you get your job?

G: A friend got a job in the dining hall and when she left Denison I took over her job. I thought it was really brave of her to work for the dining hall. They started me out with really short hours but gradually.

Do you think you’ll continue to work?

G: I hope to get more into catering and concession stands. I like setting up and running my own thing. It’s kind of like owning your own business but you’re under supervision. I think it’s better to work catering as a student because the hours are more flexible.