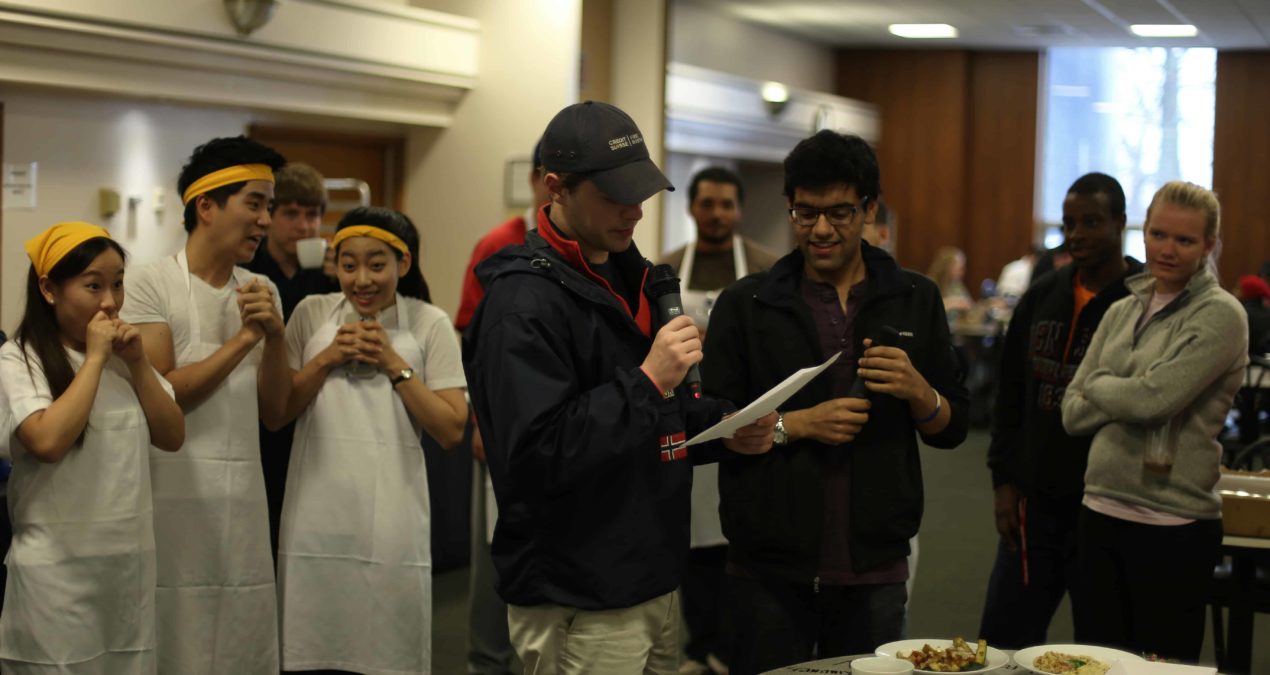 The air was thick with the smell of fragrant spices, sizzling chicken and boiling couscous at Denison’s first ever Big Red Iron Chef competition. The competition started off with the sound of the banging of bowls and the hammering of knives on a chopping board.

The four teams were given the list of  ingredients a week in advance, and on the day of the event, they were allocated one hour to make a dish that would best titillate the taste buds of their judges.

Before the competition, Wontack Song ’14 said he was “feeling calm because [he had] been cooking lately.” Xavier Vargas ’15 from Chicago, Ill., on the other hand, said that he was feeling “a little nervous but also super excited.”

Teams could be seen talking out their game plans as they figured out the best way to utilize their time to serve a professional dish to their judges.

Team “Jenny is Awesome” with Wontack Song ‘15, Jihyun Kin ‘16, and Siyu Yan ‘16 served rice with chicken marinated in spices with a side of chicken noodle soup.

Team “The Clean Up Crew,” consisting of Bridgett McDevitt ‘14, Cory Van Auken ‘14, and Adam Safer ‘14, served Swiss Chard stuffed with couscous and chicken on a bed of the same.

All teams finished plating a couple minutes before the deadline and presented their dishes to the judges. After a few moments of intense scrutiny and tasting, the judges announced that the scores were close. Team “Jenny is Awesome” secured first place with “The Clean Up Crew” finishing second. The teams all received a bottle along with a gift card to Slayter each as their prize.

“We feel awesome!” said Jihyun Kim ’16, the Jenny of “Jenny is Awesome.” “We didn’t feel ready, but then when we [were] doing it, it felt like it was going really smoothly.”

Regarding the future of the event, Raghav Daswani ’15, the host of the event who is from Calcutta, India, said that the event next semester “will be bigger and even more challenging with a completely new concept.”