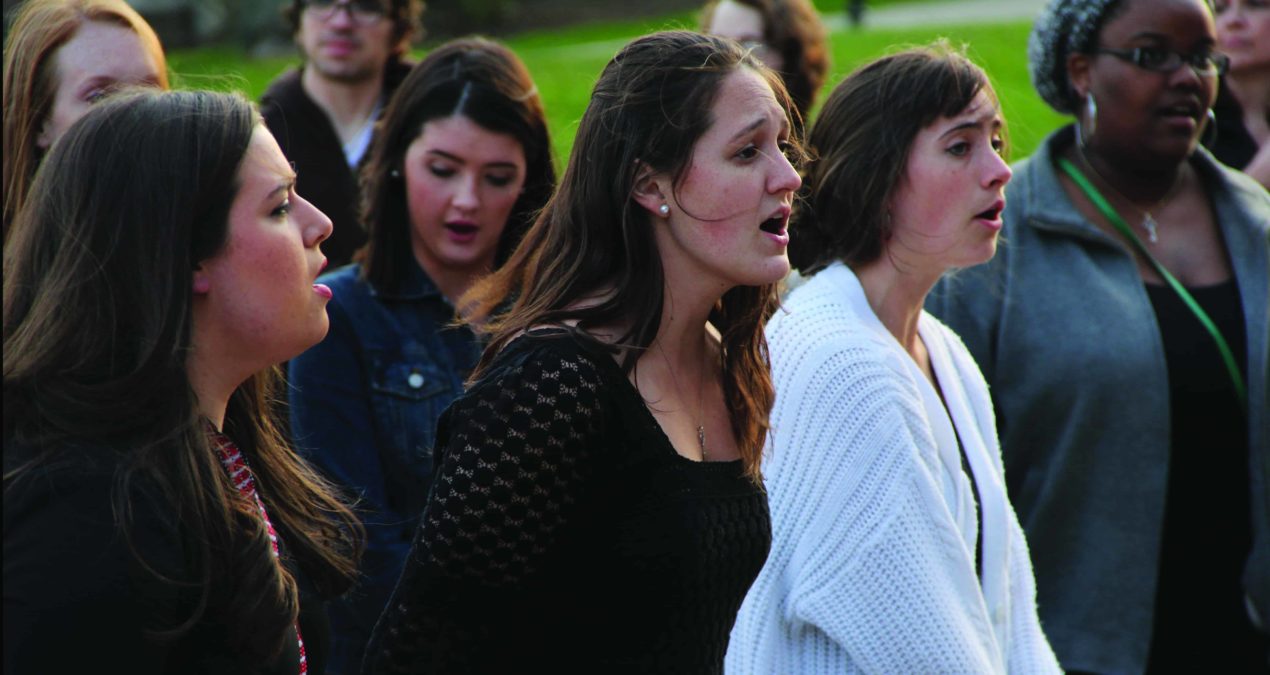 Students rally around the flag for two occasions

Supporters of women’s rights and empowerment gathered around the flagpole twice last week to support and honor women and survivors of sexual assault in two different events: Take Back the Night and the Equal Pay Day Rally.

In honor of Take Back the Night, victims of sexual assault and supporters gathered in a circle around the flagpole carrying lit candles and listened, empathized and sympathized with the sexual assault stories of their peers.

The candlelight vigil also included a short concert by LNO, and it took place on April 22 at 7:30 p.m. It was organized by SHARE and the Center for Women and Gender Action.

President of SHARE Lisa Huffman ‘14 from Marysville, Ohio, said the purpose of the event is to “create a safe place for students to come together and support each other in experiences related to sexual assault.” Marci McCauley, the director of the Center for Women and Gender Action, agreed: “The goal is to empower survivors of sexual assault.”

Students who went to the event said that Take Back the Night fulfilled its purpose. Karen Osborne ‘16 from Cross Plains, Tenn., said, “I think events like these are important because we as a campus community often forget that students here deal with a lot of serious issues such as sexual assault, and events like Take Back the Night remind and inform us of the presence of these issues on campus.”

Although Take Back the Night has not been an annual event in the past, it has been happening on this campus since the 1990s, and has always taken place in April in honor of Sexual Assault Awareness Month.

The Equal Pay Day Rally, on the other hand, occurred for the first time last week on April 24 and was organized by the American Association for University Women (AAUW) and the Center for Women and Gender Action.

Paige Robinet ‘14 from Detroit, Mich., said she and Allie Colina ‘14 from Hightstown, N.J., the president and founder of AAUW at Denison, decided to plan the event to increase student’s knowledge about the pay gap between women and men in the workplace.

To put that into perspective, Robinet said, “The National Partnership for Women and Families argues that if full-time working women in Ohio were paid as much as men, they could afford nine more months of mortgage and utility payments.”

The Equal Pay Day Rally consisted of speeches by Dr. Weinberg, Meghan Pearce, Jackson Wu-Pong, Allie Colina and Paige Robinet. Robinet said, “One of the coolest parts of the rally was that President Weinberg not only there to show his support for equal pay, but he also spoke on why this issue is important to him.”

Robinet said that this issue is important because it is important to understand that “Equal pay is not a women’s issue, it is a human issue and one that we all need to support.”

PHOTO POLL: What did you do this Big Red Weekend?