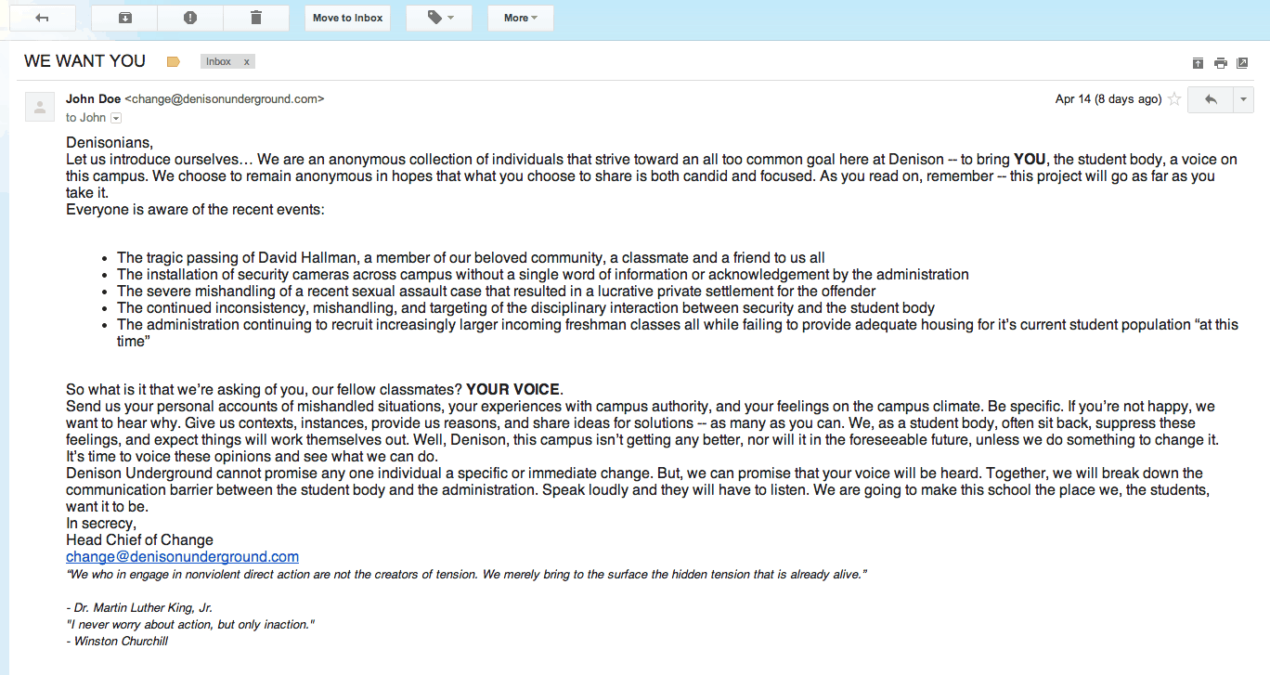 “RAISE YOUR HAND if you have ever been personally victimized by Regina George.” This statement, uttered by Mr. Duvall in the iconic 2004 film Mean Girls pretty much sums up Yik Yak, the new cell phone application that has taken the student body by storm

Since last week, Yik Yak has become increasingly popular, and along with that, anonymity has become the norm for students’ voices on campus, such as in the John Doe e-mail that was sent to all members of the Denison community last week. The app allows anyone within a certain area to post anonymous comments onto a virtual message board, many of which are rude and degrading.

What started off as a harmless source of entertainment has quickly spiraled into an offensive stream of comments that people fearlessly post because they do not have to be held accountable for what they say. A growing number of these posts have become personal attacks on certain individuals and groups on campus, particularly Greek life and members of the DCGA, in light of the recent elections.

This app is living and virtual proof that anonymity can be used as a tool to convey messages without repercussions.

Similarly, on April 14, an email from a “John Doe”, email address change@denisonunderground.com, with subject line “WE WANT YOU” was broadcast across campus through the Denison network. The signature line of the email included Winston Churchill’s quote “I never worry about action, but only inaction.”

But how can one take action if they are hidden behind the ineffective mask of anonymity? Upon typing the alleged website, denisonunderground.com, a website filled with sponsored advertisements comes up on the screen. How are we supposed to even get our voices across if the website is not real?

Anonymity implies a sense of shame in opinions, and therefore actions. Just like the contributors to Yik Yak post cruel opinions to hide the stigma of a cyber bully, the John Doe destroys his credibility in his nameless email and claims.

We at The Denisonian are for fighting to improve Denison and have students’ voices be heard, but anonymous pleas and posts are not the way to make changes. Anonymous posts or opinions only serve as an outlet for complaints and blameless cruelty. Students need to find a voice that they can be proud to attach their name to, whether that voice offers positive or negative feedback.

Instead of anonymity, shouldn’t we be trying to promote open dialogue? If we hide behind our computers, we only add to the problem, instead of trying to alleviate it.

Drop everything and listen to Billie Eilish

First-years and the parking situation on campus