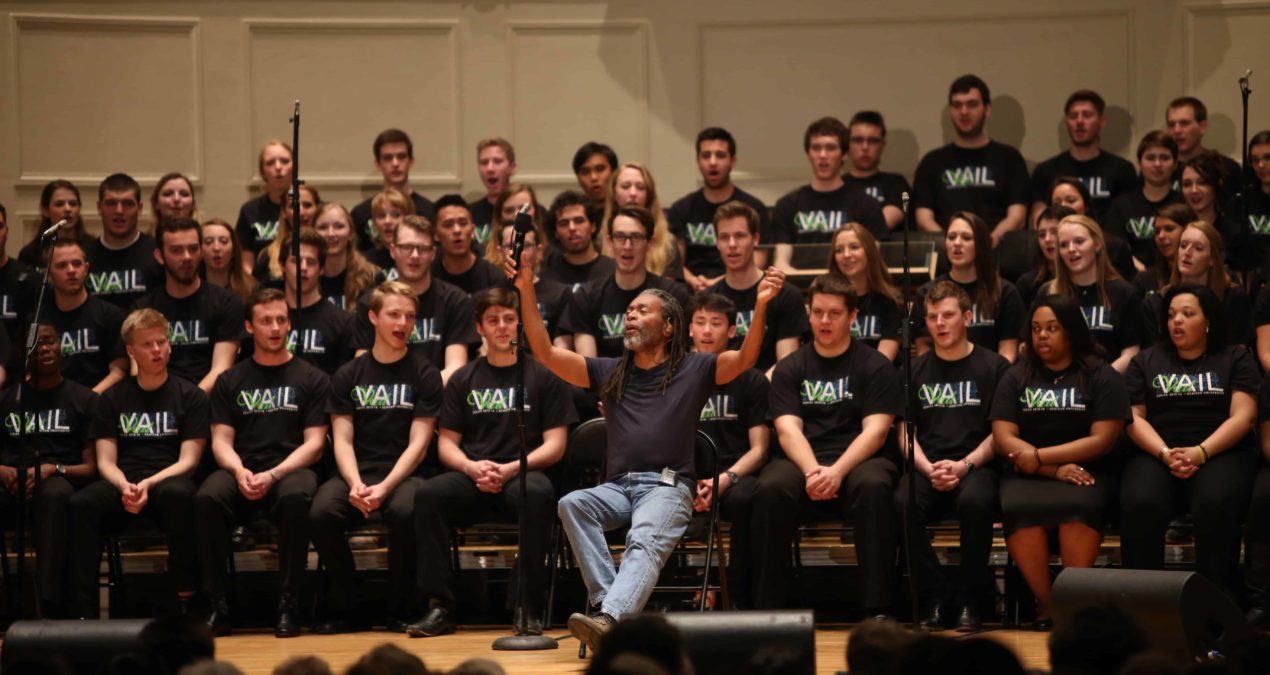 Signs and banners had been hanging around campus for nearly a month promoting the Vail Series’ final concert: ten-time Grammy award-winning vocalist Bobby McFerrin, best known for his 1990 hit “Don’t Worry, Be Happy.”

When McFerrin finally took the stage at Swasey Chapel on March 27 and 28, students soon learned it was worth the hype.

McFerrin was accompanied on his first evening by members of the Denison Gospel Choir, as well as by the Modern Dance Ensemble and an instrumental ensemble featuring student bluegrass musicians and faculty Andy Carlson and Casey Cook.

The opening night whet the appetite of the audience for a more varied “experience,” as McFerrin called it. The next evening featured performances from the bluegrass group as well as the Hilltoppers, Ladies Night Out, DUWop, the Denison Chamber Singers, Tehillah, and the African Dance Ensemble.

McFerrin’s style was largely improvisational, and he opened his finale set with scat singing that sounded every bit as lively as if he were playing an actual drum. He was then joined by all student performers and “sang” back to Carlson’s fiddle.

What sounded like a simple chat soon slipped into verse, with McFerrin sing-songing “Yo-Yo Ma is a friend of mine, he comes here to play sometimes,” doing the same for Lorraine Wales, founding director of the Vail Series (now retired).

Despite being the star of the show, McFerrin maintained a laid-back and silly demeanor throughout the performances, casually inviting the student groups to perform as if he were just a host and not a musician.

The African Dance Ensemble, led by Assistant Professor Stafford Berry, began its set with a simple “Chosalosa” chant before breaking into a truly incredible, lively performance (which McFerrin tried to imitate after they had finished, to the audience’s delight).

McFerrin was then joined by Carlson on fiddle, and performed a sweet rendition of Frank Sinatra’s “Autumn Leaves.” He then asked the bluegrass band, in a mock-Southern twang, if they would perform Hank Williams’ “I Can’t Help It.” Grace Gilbert ’17, of North Yarmouth, Maine, led the band beautifully, with a voice that filled Swasey simultaneously with power and gentility.

Gilbert sang again later during the band’s performance of “Workin’ on a Buildin,’” where they were joined by the dance ensemble and McFerrin in a flawless and clever combination of bluegrass and African dancing (this reviewer’s personal favorite moment of the evening).

The a capella groups all gave solid performances, with Ladies Night Out’s rendition of “Killing Me Softly With His Song,” the Hilltoppers’ version of “Abraham, Martin, and John,” and Tehillah’s “Freedom is Coming” receiving applause from the audience and praise from McFerrin himself. H even noted that LNO’s use of air guitar was “unusual but surprisingly effective!”

DUWop performed “She Will Be Loved,” and McFerrin led both performers and the crowd in singing the Beatles’ “Birthday” to member Luke Belechak.

When Belechak answered that he was turning 22, McFerrin noted “I was 22 once,” to which a child in the crowd remarked, “We know that!” The child was asked on stage by McFerrin but declined, and another child, Matthew, took the stage, joining McFerrin to sing Pharrell’s “Happy” (the child’s request).

Additionally, a young man identified only as Jason joined McFerrin for Ella Fitzgerald’s “Lullaby of Birdland,” stunning both the crowd and McFerrin, whose performances (or “experiences”) have a reputation for audience participation.

McFerrin led the performers in a delightfully bluesy rendition of “Sweet Home Chicago,” accompanied again by Carlson. Before finishing the show, McFerrin and Berry also had a “dance-off,” ending the experience on a joyous, whimsical note that received a standing ovation.

“[McFerrin] lets the sounds flow out of him. The energy in the room was so free; I was completely captivated,” said Megan Hart ’15, an environmental studies major from Keene, N.H.

Max Kelly ’16, an economics major from Highland Park, Ill., agreed. “It was never boring, and you never knew what he’d do next. It was so wonderful how everyone, including the audience, came together to create music.”