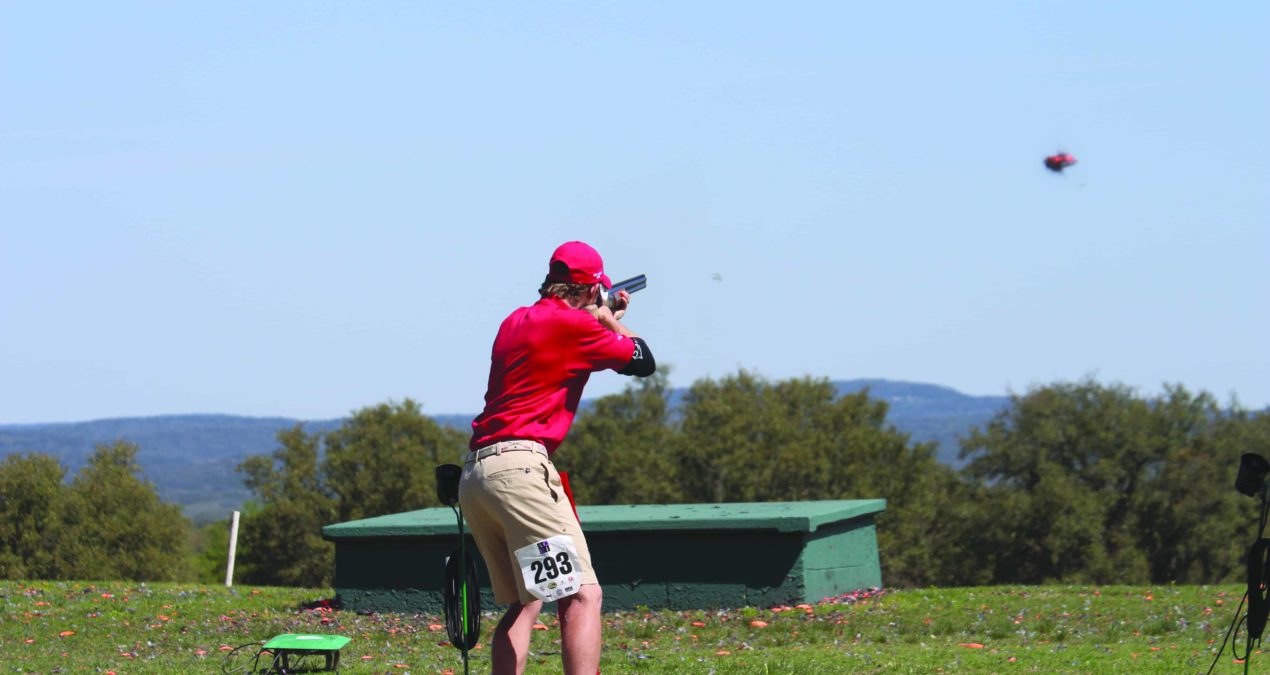 Out of all the unique and unusual sports out there, skeet shooting must be one of the hardest to master. With the recoil of the gun to the timing of the shot, it’s a wonder people even get close to hitting the target. But for the interested and talented, there is a large and competitive community.

“At the Nationals there were over 60 schools represented by over 600 shooters,” said Burton. “There are a lot of women shooters, who compete equally with the men.  My skeet squad included a woman national junior champion; needless to say she was the best of our group.”

Skeet Shooting, for the uninhibited, is basically the sport of shooting, but the type of shooting that challenges even the keenest of eyes and the most observant of folk.

“This is a shotgun sport where you shoot at clay pigeons thrown by a machine.  The clay pigeon is a four inch diameter disc made from pitch and tar, and it is painted bright orange so that you can see it against various backgrounds.  It is released from the machine (called a trap) at speeds typically of 40 to 60 miles per hour,” added Burton.

To put that in relative terms, 60 miles per hour is a little bit under the average speed of a collegiate “change-up” pitch, and the competitors in skeet shooting are tasked with shooting that disk out of the sky. So instead of a bat, imagine you are holding a gun and you have to shoot at something zipping by you. Clearly, experience is a neccesity, and thankfully Burton has that in bunches.

Burton continues, “I started shotgun shooting with my family at the age of 10, and started casually competing at my hometown club while in high school.  This is my first year competing on a state and national level.  In preparation for the Nationals I shot over 2,000 targets during spring break to prepare me for the Nationals.”

All this practice ended up paying big dividends as Burton brought his A game (literally, as he scored a 93/100) and impressed nearly everyone with his performance.

“The Nationals had very tough competition, as I expected. I was in the top 15% of all shooters, beating some great schools. I finished third in my age group and third in my ‘B Classification’ out of 75 shooters.”

But Burton isn’t one to rest on his laurels, and is eager to improve. saying, “I have three more years to improve and master shooting at this elite level.”

Speaking of improving, Burton took some big steps just by going to the National Championship, including being coached by a legend in the sport.

“I spent the first two days of spring break being coached by Richard Marshall from Lincoln, Neb., who is a world champion trapshooter and master level sporting clay shooter,” said Burton. “After, that I competed for six days at the Silver Dollar Shooters Club in Odessa, Fla. at the Southern Grand trapshooting tournament, sponsored by the Amateur Trapshooting Association.  My scores improved dramatically, and I raised my averages significantly.”

While skeet shooting may not be the most talked about club sport on campus, it certainly has a growing popularity and attendance-stemming from its inception.

“The atmosphere for clay target sports is excellent at Denison.  Our clay target club has over 100 students on our mailing list, and we typically have 10-12 for an afternoon of shooting once a month.  Our athletic department supported my request to compete in the Nationals this year, and I am very appreciative of senior associate athletic director Lynn Schweizer’s support of my efforts,” adds Burton.

For those inclined, joining is as easy as pulling the trigger on a shotgun!

Burton exclaims, “I encourage to try it and it is my goal to have Denison represented by a full squad of shooters next year at Nationals, which is five students.  The largest teams at the Nationals this year had over 50 students.”