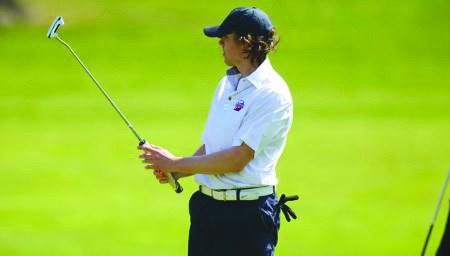 The men’s golf team completed part one of the two-part NCAC tournament on April 26-27, finishing in fourth place.

The tournament is based on four rounds of golf played on back-to-back weekends. Rounds one and two took place at conference rival DePauw University.

The team entered the conference tournament hot after winning its first tournament in a year’s time two weekends ago. “Practice this week was very focused,” Guille Heneger ’17 said. “[Time was spent] straightening out the kinks in each other’s game in preparation for the big weekend.”

On the first day, the Denison squad fired an opening round of 316. Led by Aaron Klimchuk ‘14 who hit a 77, of just five over par, this total score put the team squarely in contention for the title. Alex Geanakos ’15 scored a 79, the team’s second best performance.

However, the wind on the second day took a turn for the worse, which changed the course drastically. “The wind was blowing around twenty miles per hour all day,” Heneger said. Co-captain Jimmy Slovitt ‘15 agreed, adding that, “The greens were tough, and the already long course was playing harder than usual.”

The men were not deterred and continued pressing, jumping up to fourth when all was said and done on Sunday. Jonathan Taylor ’17, who has impressed Coach Rodney Butt all spring, posted a 77 to lead the Big Red in the second round.

Taylor’s weekend total of 157 was the best on the team. Geanakos and Slovitt supported, as they both finished the weekend just one shot behind Taylor. Slovitt said that the team hopes to capture second spot by the end of next week, as they currently sit only eleven strokes back from second place.

The final weekend of the season will be played at Wabash College on May 3-4 where the Big Red will take their last shots in hope for conference glory.