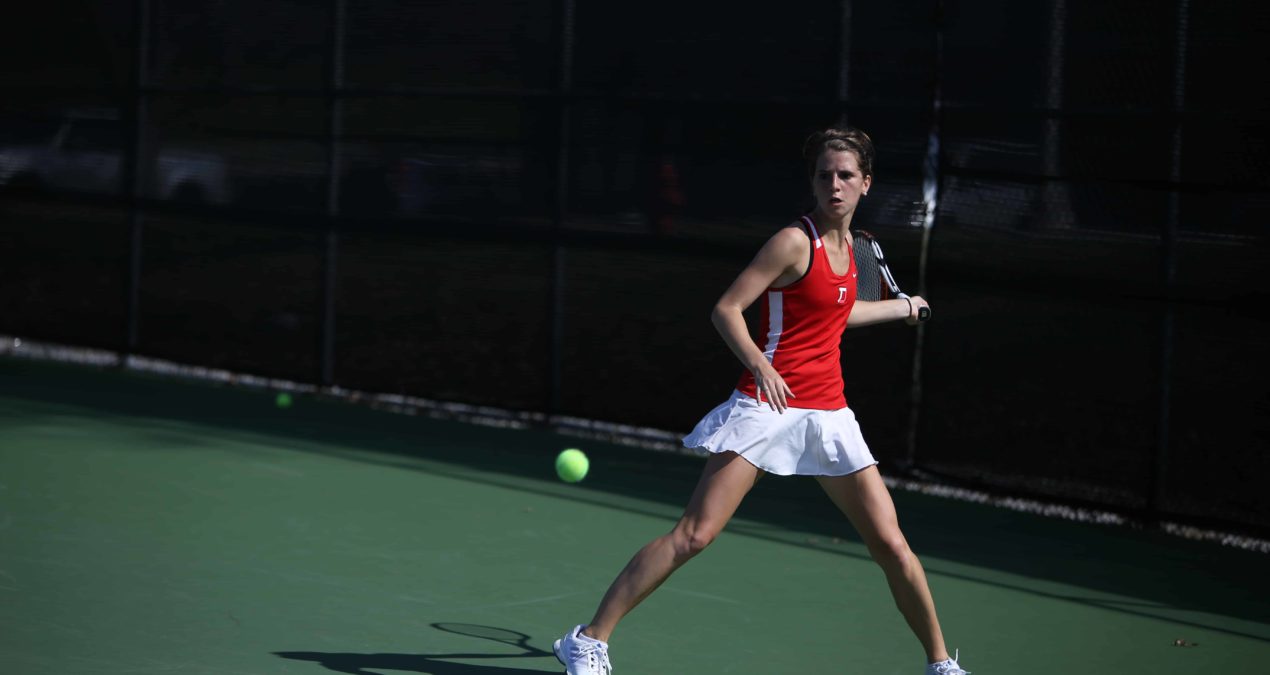 The women’s tennis team held the NCAC tournament quarterfinal, semifinal and championships at its own courts on April 25-27. The team finished the season in second place in conference, behind DePauw for the second consecutive season.

The tournament began on April 25 with the quarterfinals. The Big Red competed against Ohio Wesleyan, and came out on top with a 5-0 win.

Denison started with a bang when Meg Chiumento ‘16 and Sarah Torrence ‘16 started off the day’s match with an 8-0 win over OWU’s Ellie Magner and Alex Webb. Following Chiumento and Torrence’s win, the doubles tandem of Kelsey Geppner ‘14 and Taylor Hawkins ‘16 defeated Ohio Wesleyan’s doubles team with a score of 8-1, resulting in their 13th win of the year. DU finished out doubles play strong with Heather Abzug ‘15 and Eleni Coleman ‘16 beating Meghan Guthrie and Kimberly Baione, 9-7.

Next came singles play for Denison, where Geppner and Emily Holloway ‘17 took home victories for the team. Geppner received her 14th win of the season when she defeated Ohio Wesleyan’s Whitney Lonnemann with a shutout. Holloway also overpowered Webb with a 6-0 win. This was Holloway’s fifth consecutive win.

On April 26, the women defeated Oberlin, 5-2 in the semifinals. Coleman and Abzug claimed the first point of the match after an 8-3 win over Oberlin’s Erin Johnson and Olivia Hay. Following Coleman and Abzug’s game, Geppner and Hawkins took the court to challenge their regionally-ranked rivals, who beat the DU team seven months earlier. However, this time Geppner and Hawkins came out on top with a close 8-6 victory. The day’s score was solidified with an extended DU lead by Chiumento during singles play with final scores of 6-4 and 6-0.

The Big Red women took to the courts again on April 27 against 11th ranked DePauw for the NCAC championship game.

“I’m really looking forward to NCAC [championships],” Hawkins shared before Sunday’s match. “We’ve grown so much as a team, and we have the talent to win this tournament. I believe if we work as a team, and support every girl whether they’re playing or not, we can do anything we set our mind to. After last year’s 4-5 loss to DePauw in the championship match, we’re all determined and excited for hopefully another chance to bring home the championship title.”

The women ultimately ended their tournament run in second place after falling 6-0 to DePauw. The Big Red finished the season with an 11-9 record.

Mental health: An often overlooked issue in the world of sports