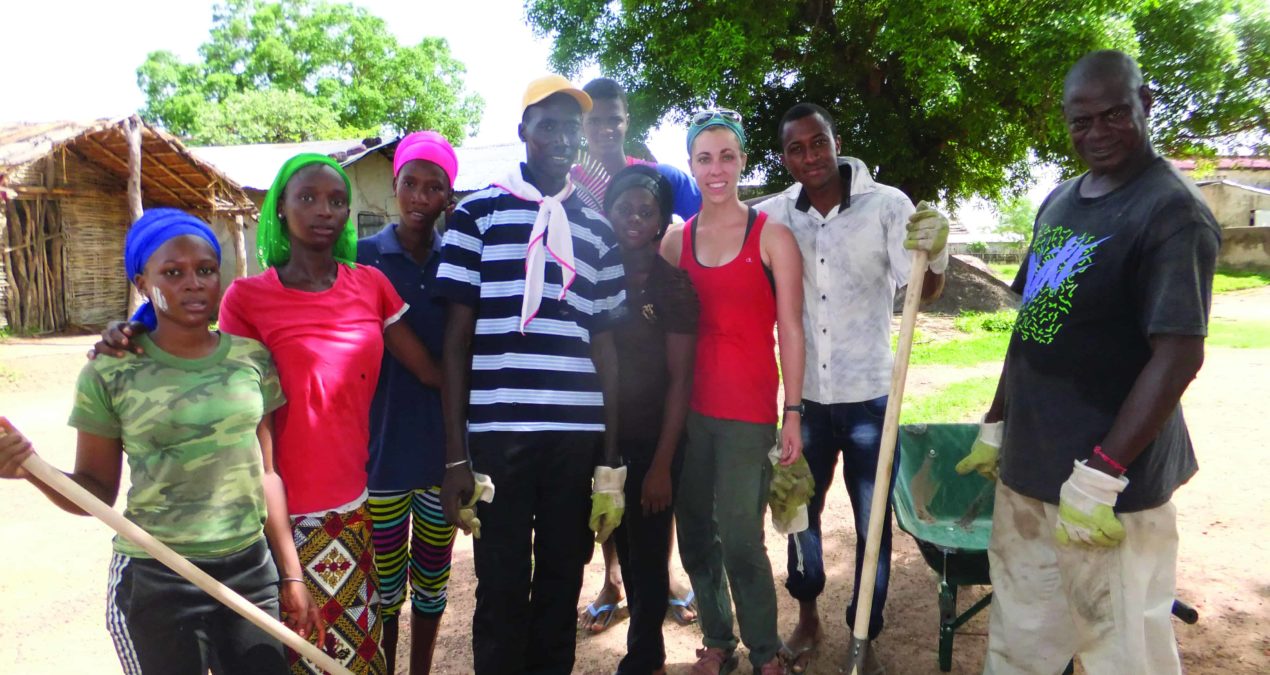 The village of Dindefelo, home to roughly 1,400 Senegalese, is perched on the edge of one of Africa’s more famed waterfalls, far from the trappings of the continent’s cities and their beanstalk-esque growth.

If all of this sounds a bit reminiscent of an Eden – lush, bucolic, untrodden – then one might not be too far off the mark.  Yet in the opinion of Columbus native and geoscience major Grace Bachmann ’17, this lens contains its own manifold dangers.

Even while it is attempting to bridge the widening gulf between decadence and destitution, the world of international development is facing its own either/or conundrum.  On the one hand, a form of shock therapy can be imposed, inundating the beleaguered villages with the vestiges of modern life and, in the process, burying their culture under the resultant avalanche.

On the other hand, if the programs are not ambitious enough – treating the affected like untouchable museum pieces rather than people in need of genuine help – then the battle is lost before it has even started.

What Bachmann envisaged after accepting her Davis Peace grant was a third way; a means by which to deliver bona fide, life-changing aid without the people of Dindefelo having to put up their culture as collateral.  To that end, she spent the better part of her summer trying to bring her ideas to life.

Much as the potter works in clay or the sculptor in marble, Bachmann’s medium was garbage.  Prior to her sojourn, the village’s waste management strategy could best be described as nonexistent.  Housewives, when cleaning their homes, would sweep rubbish – both organic and inorganic – into their yards, where, incidentally, the family’s corn and peanuts would grow.

Something had to give.

Bachmann’s and her colleagues’ solution was simple: fifty oil drums, when sawed in half, made perfect trash cans.  Spread out across a town that takes twenty minutes to walk from end to end, these provided much-needed uniformity.  Meanwhile, two men were hired to dispose of the refuse to a nearby landfill vis-à-vis cart and donkey.

Like any endeavor on the scale of Bachmann’s, she confronted circumstances that both eased her way as well as gave her unforeseen headaches.  On the positive side of the equation, there was already a preexisting desire within the village to create a healthier waste management infrastructure; consequently, not only did Bachmann have an abundant supply of teenaged volunteers at her disposal, but she never had to worry about things falling apart once she returned stateside.

“The fact that I left was inconsequential, and that was a good thing.”  Furthermore, Bachmann was the only foreigner (read, non-Senegalese) to be working on the project, thus avoiding the suspicion that it was anything but an African venture designed by Africans for Africans.   Accusations of Western bullying and conniving were simply not tenable.

Having spent her post high school gap year in the same village, Bachmann thought she knew what to expect the second time around.  But even a few months torn from the calendar can dramatically change what occurs on the ground.

On her prior African adventure, she had been present in from September through April.  This time around, however, the unabating summer months inflicted their price on her hard work and fruitful ideas.  For one, the near constant deluge of rain often kept villagers indoors, and whenever sunshine managed to break through, they would be working their farmsteads, leaving precious finite time for organizing and planning the garbage project.

Furthermore, Bachmann’s time coincided with an election local campaign that saw many women and children recruited into the ranks of ambitious politicians.  Finally, the holy month of Ramadan, which mandates fasting from dawn until dusk, is observed in predominantly Muslim Senegal.  Without consistent nourishment throughout the day (Bachmann fasted too), she found it difficult to exert the kind of energy she had expected.

All in all, Bachmann found the work hard but rewarding, and hopes to see the village she has come to know so well flourish.