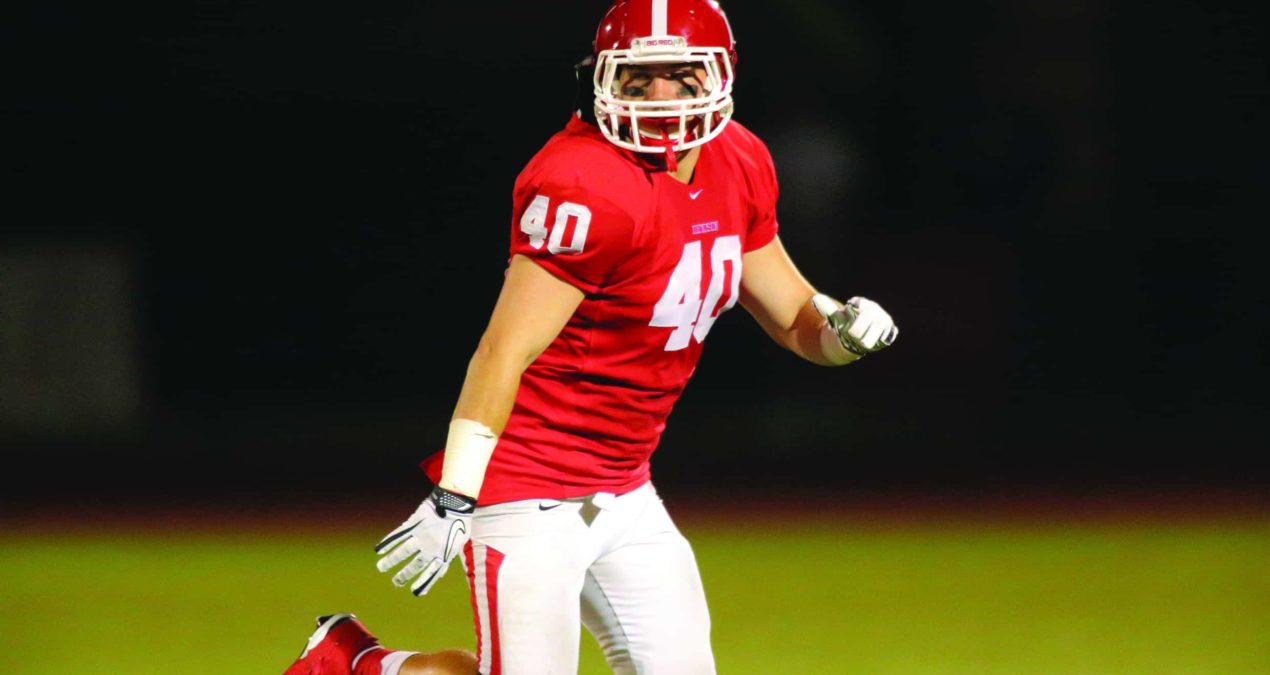 Far from home, the Big Red football team looked electrifying in their season opener against Earlham College in Richmond, Ind.  The 35-6 final score is a reflection of a strong performance on both sides of the ball.

On offense, running back Colin Morris ’15 turned in an impressive three rushing touchdown game with the help of his workhorse offensive line led by Nate Bartell ’15 and Tom Demers ‘15.

Quarterback Brandon Sklenar ’15 found the end zone twice on the ground and also threw for 191 yards against a solid Quaker secondary.

The score line, however, belies the offense’s slow first quarter, where DU  was scoreless.  The Denison defense was forced to pick up the slack and they remained stalwart throughout the match, holding the Quakers to only six points on two field goals in the second and third quarters.

Defensive back Andrew Baird ’17 was proud of the squad’s performance. “I think this game shows what our defense can accomplish when everyone does their job and are all in sync with one another.”  Baird led his teammates with eight tackles.

Baird also stressed the importance of maintaining confidence, even when the team starts slightly sluggishly.  “When one side of the ball is faltering, the other side (must) be there to pick them up. After the defense made some key stops, the offense got things rolling and everything played out fine.”

The Big Red defense gave their key offensive weapons, Morris and Sklenar, the chance to shine.

After the first quarter, they were able to settle in, convert their third down opportunities with great efficiency (71 percent) and out power the Quakers to the tune of 437 combined yards.

Sklenar had nothing but praise for the support around him.

“We have talented players on both sides of the ball who know how to rise to the occasion.  Hunter Winans ’16 saved multiple drives with impressive grabs, and Pat Carney Foley ’15 anchored our defense alongside the impressive play of Percy Roberts ‘18. Joel Lohoua ‘17 and Chandler Bridges ‘18 looked like veterans at the two cornerback positions.”

Confidence defines the identity of this veteran squad.  In the words of the quarterback, “This will be a big year for the Denison Big Red football team.”

Much of this confidence is derived from the approach of fifth year coach Jack Hatem and his staff.

“Hatem and company preached all week to not take [Earlham] lightly, and I think we took that to heart.  You never want to give a team too much or too little credit going into the game and I believe we were right on the money this week.”

Preparation is one of the essential factors that can affect the outcome of a match and, according to Romick, “[Saturday’s game] just goes to prove that the coaching staff really knows how to prepare us well for anything the other team might throw at us.”

The Big Red will look to replicate last Saturday’s effort on Sept. 13, when Denison will travel to Hiram, Ohio to battle the Terriers in their conference opener.

Volleyball team wins one, loses one, in conference games