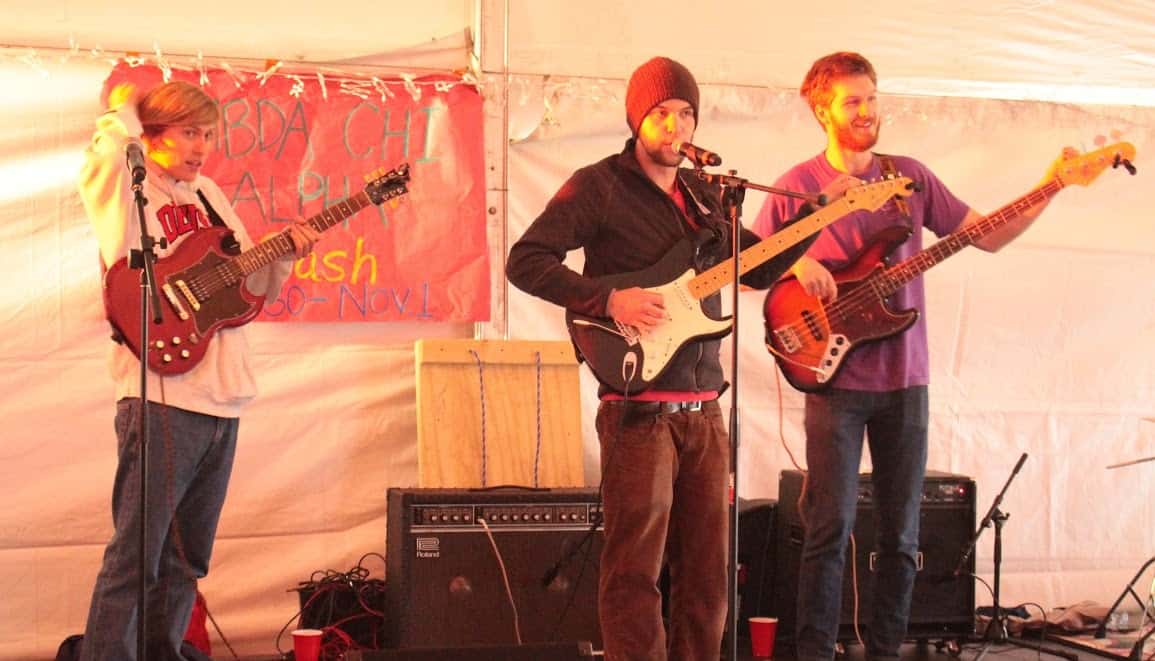 Despite the rain and cold on Halloween,  staff, students, and Granville families assembled on the Reese-Shackelford Commons to partake in Lambda Chi Alpha Fraternity’s first annual Fall Bash. The event was held to benefit the Mid-Ohio Foodbank, a non-profit organization dedicated to fighting hunger in central and eastern Ohio, including Licking County.

Throughout the week, Lambda Chi members got involved with various volunteering activities, including serving as crossing guards for trick or treaters on Halloween night with the Granville Police Department. They also collaborated with Denison’s Homelessness and Hunger group to visit the Yes Clubhouse in Newark, where children are able to go for after school activities. There, they painted pumpkins with the children and served food from Denison Dining Services.

On Oct. 30, Lambda Chi hosted a fundraiser with Moe’s Original Bar B Que, with 15 percent of the proceeds donated to the Mid-Ohio Food Bank. In preparation, Moe’s doubled their food supply, but all the food was sold out due to the event’s high turnout. “It was great to see how many people were brought together to help such a great cause,” said Robbin Banasiak ‘15, of Cleveland, Ohio.

The final event, held on the Commons, boasted a wide range of activities and entertainment. While the all-student band Chowdah played under the tent, guests smashed pumpkins, ran in sack races, rode a mechanical bull, and enjoyed hot apple cider and pizza from Joe & Mimi’s (donated at half-price).

After the pumpkin smashing, the Burrito Bus food truck was parked outside of the Brownstone apartments, with 15 percent of the proceeds also added to the overall donation.

Thanks to donations and the outstanding number of participants, Lambda Chi will donate at least 13,000 pounds of food to Mid-Ohio Food Bank. The External Vice President of Lambda Chi and event organizer Patrick White ‘15 of Buffalo, N.Y., said “it was really great to see the way Denison students, administration and the Granville community came together to support this event.” White especially wanted to thank “everyone in the administration and beyond that were so pivotal in making this event such a huge success.”