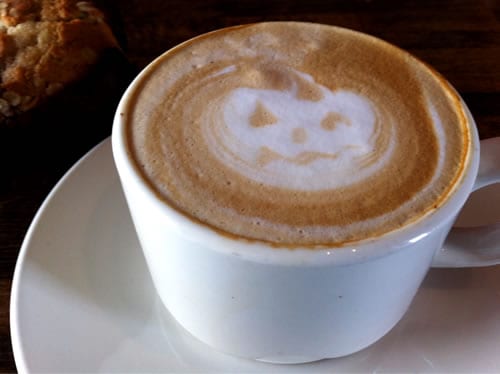 When smiling, carved pumpkins and spotted gourds start to appear on doorsteps, coffee shops begin expanding their menus to include a popular fall staple: the pumpkin spice latte.

Pumpkin spice, which made it to the mainstream eleven years ago when Starbucks Coffee introduced it to its seasonal menu, can also be found in Granville’s coffee shops.

Rather than making the 20-minute drive to the nearest Starbucks, Denisonians and Granville citizens alike can either head downtown to Village Coffee or drive up to River Road and order the beverage. Both coffeehouses offer different variations on the pumpkin spice latte.

Village Coffee has a pumpkin chai, in addition to the more traditional pumpkin spice latte. The pumpkin chai is a little sweeter than the pumpkin spice, with hints of a chai latte. It is also relatively inexpensive, at $2.25 for a small.

The pumpkin spice latte is $3.35 for a small, and has a subtler flavor than its Starbucks counterpart. Both drinks are excellent when paired with a pumpkin muffin from the shop’s own baked goods section.

There is also a pumpkin chai, which is very sweet. The chai part of the mixture compliments the pumpkin. Last but not least, the shop’s own version of the pumpkin spice latte is a treat.

Swirled with cream, and topped with a light dusting of cinnamon, the drink has a stronger, but sweeter, pumpkin spice flavor. One could even go so far as to say that it might be better than the Starbucks version.

While the Starbucks version tastes strongly of espresso with a hint of pumpkin, the River Road latte brings the pumpkin flavor to the foreground. There is just enough pumpkin flavor in it that the espresso is not masked, yet it does not overpower.

Both local coffeehouses are highly recommended destinations for those looking to get their pumpkin spice fix. Flavors are available through Thanksgiving, and then until supplies last.