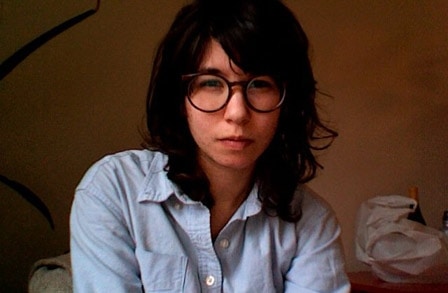 Natalie Shapero awed Denison students, staff, and visitors at the third Beck Lecture of the year, hosted in the Barney-Davis Board Room on Oct. 20. Her light personality and eloquent poetry engulfed the audience for the entire evening. The recitation was followed by a book signing and questions.

Shapero, who hails from Pennsylvania, studied at Johns Hopkins University in Baltimore, Md., and was later a part of the MFA program at Ohio State University.

Intriguingly, Shapero earned a degree in law during her years as a student. She recieved the GLCA Award for her poetry book No Object and is currently the assistant editor of the Kenyon Review.

“They stay with a theme longer and then they just riff and play, and the funnier they get the more lethal they are. They’ve got more of a kind of adventurousness to them. She just lets herself think more, and that’s what I really like about them.”

“I appreciated her honesty through her work,” said Cheyanne Cierpial ’16 of Clark, N.J. “She has a very unique and almost twisted view of the world, but she expressed that with humor. She was refreshing.”

“I thought her reading was a combination of odd humor and relatable quirkiness,” Carolin Frias ’17 of Boston, Mass. said. “Her poems really exposed the inner workings of a mother, grad student, woman. My favorite piece she recited was ‘Orange on the Nail.’”

Shapero recited a total of 19 poems, ten of which were from No Object (including “Arranged Hours,” “Implausible Travel Plans,” and “Lean Time”), two of which were inspirations from her own pregnancy (“My Hand in Cold” and “Hard Child”), and a few other poems that were the result of bad jokes she had told.

In her new project, she aims to “uncomfortably talk about uncomfortable things.”

“Mostly things I read are what inspire me to write. I like to read really widely in a lot of different subject areas,” Shapero said.

“I would encourage other poets to read a lot of poetry and recite it out loud, while cooking or riding your bike!”

“Being a writer’s nice because it’s not an exclusive commitment. You can be a writer and be a countless number of other things,” Shapero said. “I’ve been super lucky to find really great teachers and be exposed to environments that made me want to write more and do better.”

Movie review of “Glass,” the unofficial sequel to “Unbreakable” and “Split”