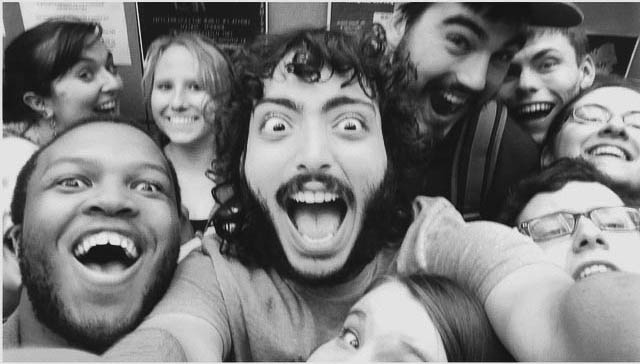 Never apologizing and never explaining, the Sketch’rs Sketch Comedy Troupe combines elements of slapstick, surrealism, and dark humor in their performances. Anything from “Pop-Tarts” made by smashing the toaster pastries into cans of spewing Coca-Cola to a role reversal of young lady pumpkins drinking “human” spice lattes is fair game for the Sketch’rs, who began two years ago under the leadership of president Will Brackenbury ‘15 of Cincinnati, Ohio.

“Kaitlyn Grissom (‘13), taught me how to do sketch comedy, and I realized I wanted a group on campus to do it with,” says Brackenbury of the group’s origins. “So I found some other people who were interested, and together we founded Sketch’rs.”

Smith, a Pittsburgh, Pa. native, joined the group during her sophomore year, and distinguishes Sketch’rs from Denison’s improv organization, the Burpee’s Seedy Theatrical Company. “I knew that written and performed comedy would be much more my style than improv. I have mad respect for the Burpees though; what they do is crazy hard!”

When asked what they like best about Sketch’rs, Brackenbury believes that the group’s joy is contagious. “Our unofficial motto is ‘never apologize, never explain,’ because we perform a lot of scenes that are funny for us, but the audience doesn’t get. And we’re fine with that!”

“We have fun onstage, and I think the audience enjoys that,” he adds. “Everyone’s hilarious, and we just try and do stuff we think would be fun.”

Others enjoy the camaraderie the group has developed. “I’m really glad I joined, because I’ve gotten to do some great work with some really awesome people who I don’t know if I would have spent time with otherwise,” says Smith.

Unvala, of Mumbai, India, says he became involved with Sketch’rs after “Facebook initially opened my eyes to the sketchy glory…after watching a show or two, I figured, ‘why not audition?’”

“Being in Sketch’rs has been one of my favorite parts of my Denison experience,” he adds. “For one it lets me write strange stuff and perform it with a group of talented people! What’s not to like?”

The Sketch’rs members thrive on their group’s inherent silliness, Unvala says. “Being a Sketch’r boils down to one thing: having a ton of fun, with a super creative group of sketchy people…and it doesn’t get much better than that.”