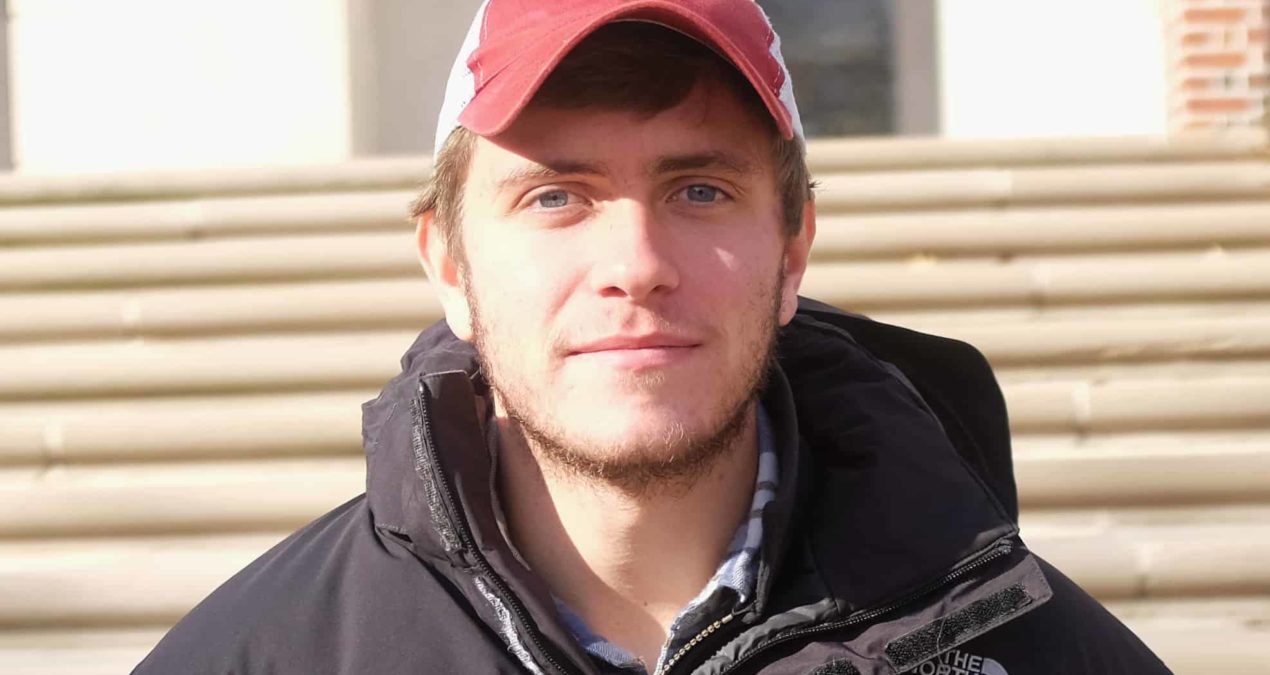 Forgot your phone charger? Student entrepreneur may have your solution

Edward Bailey ‘17 sits alone in his dorm room in the basement of Crawford Hall. The door is locked while he awaits an important business call. Suddenly, a sound very similar to that of a struggling duck starts quacking from his cell phone. Bailey stands up abruptly and begins pacing back and forth, occasionally walking in a circular pattern around the small room. He answers the phone: “This is Edward Bailey.”

Instances such as these have become the norm for Bailey, a 19-year-old philosophy, political science and economics triple major from Springfield, Ohio. Bailey is the founder and CEO of E3 Kinetics, Inc., a company that formed after he began working on a device that powers cell phones through kinetic energy.

The idea then grew into the start of a project. “My junior year [of high school], I came up with this idea: ‘Why not find a way to power your phone from walking?’” Bailey said. “If you look at any self-winding watches, the higher end watches, you’ll see that they don’t have batteries or anything, they just charge themselves off of the movement of walking, so I was like ‘well, let’s do that with cell phone batteries.’”

Bailey’s cell phone charger began with a “heavily modified” shake flashlight and a water bottle. The premise was that the water bottle could be carried around in a backpack, and would charge the owner’s phone from movement.

“Someone found out about it at my school and it kind of got blown out of proportion,” Bailey said. “They did a big news article about me, sent it to all of our alumni and before you know it, I was getting calls from people on Wall Street and out in California. It was really weird. One day, I was on the Internet and I got this email, and someone was like, ‘Dude, you made it in Popular Mechanics in Sweden.’”

After that, the company took off. “I had no idea what I was doing so for the last year and a half I’ve kind of just been playing the catch-up game because I’ve basically had to teach myself everything about being an LLC, sub S-corps, stocks, all that nonsense.”

The sophomore recently teamed up with a biomedical engineer out of the University of North Carolina at Chapel Hill, Jeff Powell. According to Bailey, Powell is “really good with 3D printers. He 3D printed a hand that works for a kid named Holden that didn’t have a hand.”

The pair now have a month’s worth of work under their belt. Bailey handles the business end of the company’s operations while Powell continues to work on a smaller prototype.

“I do a lot of it in my room at this point because Jeff has all of the UNC Engineering buildings at his disposal,” he said. “A lot of what I’m doing is contacting different people, keeping the investors or potential investors in the loop, a lot of the corporate stuff. Basically, I have the big idea in my head, and since I’ve done so much of the trial and error stuff, I know what we need to do and now my big thing is relaying that to Jeff and developing it.”

Bailey’s introduction to the world of mechanics began at a young age, when he first started playing with trains. His interest then evolved into Legos and K’Nex, and finally culminated in learning about electricity. By eighth grade, he had built a hovercraft.

“There was a thing that my middle school did called Science Fair and you would pick a project,” Bailey said. “Most of the kids were doing things like counting bacteria in a petri dish. I really liked Science Fair and that’s where the hovercraft came from.”

He attended Woodberry Forest School, an all-male boarding school in Orange, Va., for high school. The school has an endowment of upwards of $270 million, something that helped Bailey in the long run. “I was lucky enough to go to [Woodberry Forest] for high school where they just had way too much money that they knew what to do with so they would give it to students who had weird ideas and dreams,” Bailey said. “So, from that I got hooked up with a bunch of robotics stuff and I got to build drones in my spare time.”

He cited his grandfather, an engineer in the Air Force, as one of his major inspirations and the person who sparked his interest in technology. He also had a physics teacher in high school that doubled as his track and field coach. Bailey said that, “[My physics teacher] would set goals, and if I reached those, he would get me Subway or Arby’s so I think you could say my biggest inspiration were Subway sandwiches.”

As a PPE major, Bailey is learning valuable skills for someone that is a CEO at such a young age. “Being able to talk to people and being able to relate on so many different levels is really important,” he said. “A lot of this is about being able to get their interest while also showing that you’re not just another silly engineer that has some weird idea. You’ve got to be able to distinguish yourself.”

Aside from his career and academic endeavors, Bailey is also a brother of Delta Chi Fraternity and serves as Vice President of Administration for the Interfraternity Council. He enjoys hunting and building things and calls himself a “fly fishing aficionado”. His favorite class is Chinese and he is a highly involved member of the school’s Investment Club, which is given $100,000 each year to invest in the stock market. The sophomore, who earned his pilot’s license at the age of 17, also said that “cars are probably the coolest things people have ever invented.”

His sister, Liz Bailey ‘15, hosts a radio show on Mondays from 9:30 p.m. to 11:30 p.m. on the Doobie. Although Edward is not technically on the Doobie roster, he enjoys spending time with his sister during her radio show. Liz said that she is “kind of envious of the fact that he has created something and he’s so inventive but he also can handle business calls already at such a young age. The fact that he’s already done stuff like that is pretty impressive.”

Hank Tran ‘17, one of Bailey’s Delta Chi brothers, has witnessed Bailey during one of his many business calls. “From what I heard, it was just a conversation about an engineer that Ed was looking to hire for one of his products or contraptions,” Tran said. “It was very professional, he was very polite. Ed’s very aggressive and passionate and when he was on the phone I could see a very professional and calm side of him.”

Despite all of his early accomplishments, Bailey is still learning. Of Denison he said, “You can always bounce ideas off of people here, and everyone here is involved in a wide variety of things. It’s kind of the idea of being a Renaissance man.”