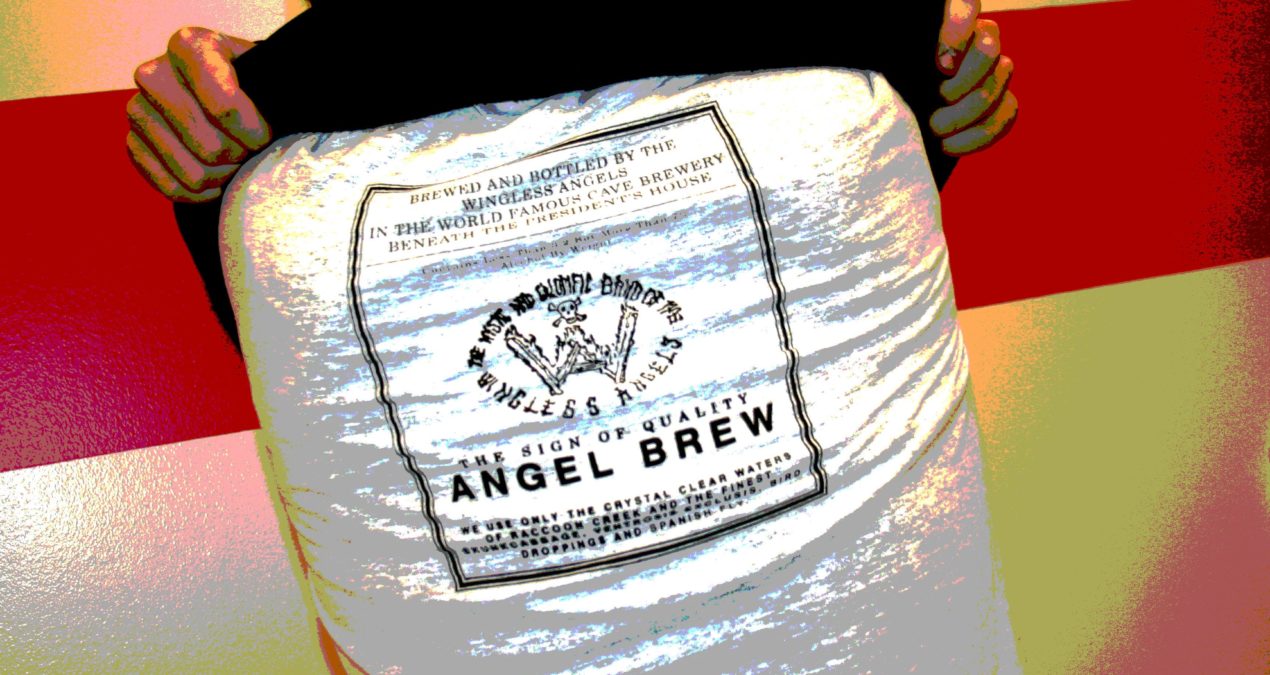 No rest for the wicked: Wingless Angel alumni reflect

They walked among us.  By day they sat next to you in class, but by night they disappeared behind iconic masks. In the hundred years since their inception, the Wingless Angels have evolved from an anti-Temperance group to a campus secret society.  Over the years, the group has executed humorous pranks from walking a horse up the staircase of the library (1965) to allegedly canceling class via a campus-wide email (2011).  They also have fallen under intense scrutiny for their alleged involvements in the assault of dining hall employee (1987) and the fire in a Beaver Hall dorm room (2013).  The Wingless Angels may have a varied history but the alumni believe that the students “usually have positive reactions toward [the band].”

The Denisonian recently conducted a phone interview with two Wingless Angel alumni that graduated within the last few years. As the statute of limitation for crimes allegedly associated with the group has not run out, the alumni interviewed requested to remain anonymous.

Lacking the long history and national attention of other secret societies, the Wingless Angels have largely gone unnoticed to the non-Denison community.  One alum shared that he first overheard people talking about the group on his pre-orientation trip.  His counterpart added, “My freshman year they burned a big ‘WA’ into the grass outside Smith and Shorney.  The mystique surrounding what they did intrigued me.  I liked what they stood for.” A flaming “WA” is burned into the ground outside the freshmen dorm, Smith Hall. Known as “the mystic and calorific band,” the name alludes to a few characteristics of the Angels–secrecy and fire.

When asked to comment on their introduction to the secret society, a process commonly referred to as “tapping,” the alumni declined to comment out of respect to ritual and tradition.

But the mystique had a cost.  “Being a part of the band was fun. The secrecy of it could be difficult at times, as we interacted with administrators on a daily basis and we had to express our opinions while never revealing our true colors,” recalled one alum.

“Avoiding detection is one of the first things discussed after you go through initiation,” reflected one alum.  Burner phones, anonymous email accounts, disguises, and emphasis on paper over digital dispatches to the campus community all play a role in their protection.

The masks, arguably the most iconic element of their disguise, have changed from band to band, some sporting makeshift cloth hoods while others donn Jason Voorhees-like hockey masks.  Finding the latter option preferable, one alum noted, “hockey masks are light and breathable while still providing anonymity and protection from Denison’s dense vegetation.” A Wingless Angel flag hung from the flag pole on the academic quad on November 3, 2014. Shortly after this photo was taken (8:30am) the flag was removed.

Yet sometimes it seems the secrecy and planning is for naught. “Students don’t always have an opportunity to see everything we do [as many pranks are taken down before mass audiences can see.]  Even if it’s just the administration who sees something it makes a statement and gives us a sense of satisfaction.”

“There’s another side to it too,” added his counterpart, “in the commitment to keeping this Denison tradition that has existed for more than 100 years.”

According to Frederick Porcheddu ‘87, a professor in the English department, and self-proclaimed “unofficial historian” of the Wingless Angels, there is no evidence of the group existing between 1917-1946.  After this gap, the group re-emerged to enact humorous pranks on campus, revealing their identities each year until the mid-80’s.

“I think now [the secrecy] is necessary,” suggested Standish Hicks, ‘15.  “When my dad went here [class of ‘81] they would get up at graduation and reveal to the entire class.  Now with all these legal issues it would just be really hard to be out in the open.”

Contrary to popular belief, however, a warrant for the arrests of the Wingless Angels, as a group, does not exist. The Granville Police Department confirmed that warrants would not be issued to a group of anonymous people–a legal name must be provided to execute a warrant.

“Part of our purpose is to be the voice of the student body,” argued one alum.  “If you associate our actions with specific people instead of with this group that stands up for student freedom then our true purpose can be forgotten or misconstrued.”

However some students feel as if that purpose is just as obscure as the group’s own existence.

“The message has been lost over the years and I don’t think they stand for what they used to, offered Grace Patrick, ’15.  “Association with a group set apart from the student body has become unnecessary since I no longer feel like they are acting on our best interests or even really listening to the needs of the students anymore.”

Still, questions abound concerning the legacy of the Wingless Angels.  Bobby Craig ‘18 inquired about the existence of the band:  “I haven’t really heard about them doing anything this year.”  This may be attributed to the speed in which pranks such as the WA flag on the academic quad are taken down.  Additionally, the Angels have, in the past, executed some form of prank on West Quad where the majority of freshmen reside. According to legend, Wingless Angel alums donated the concrete bench located outside Knapp Hall.  Engraved in the backrest, a simple “1905” is said to commemorate the establishment year of the group.  When questioned about the placement of the bench, the alumni responded with a chuckle, “We can neither confirm nor deny [Wingless Angel involvement].”

Although they have left the hill, the alumni have encountered fellow Wingless Angels in their post-grad lives: “[Having access to other Wingless Angel alums] has definitely helped me in the job search.”

Similarly, his counterpart added, “I was at a bar recently and found out the owner of it was one of our alums. I recognized his name from a conversation I had a while back with a different one of our alums.  During that conversation he was telling me about how this guy who was in WA with him and now lives in my area and apparently owns one of my favorite bars.  Guess you could say it’s a small world.” The student responsible for sending the fake email was suspected of being a Wingless Angel member. Photo courtesy Lizzie Ireland.

Meet the new Denisonian staff: One stop shop for who we are, what we do, and what we like!