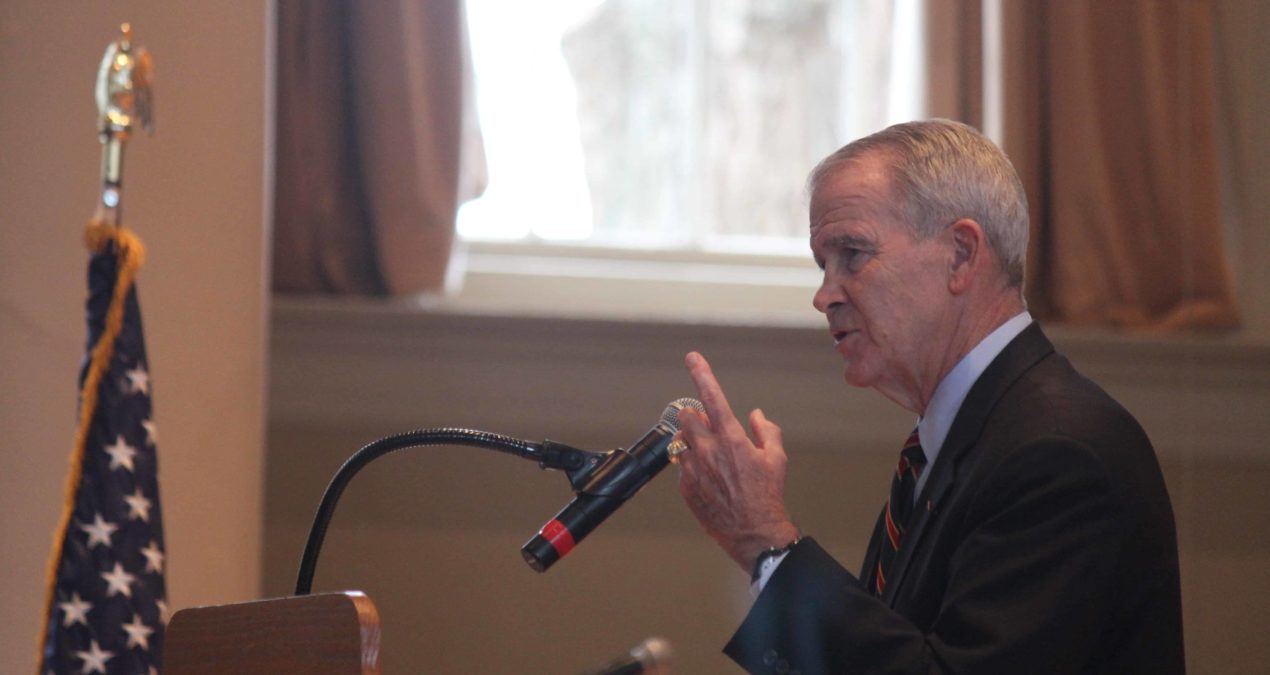 The controversy around Lt. Colonel Oliver North has been building for weeks: Bullsheet articles, posters with ‘Who is Oliver North?’ underneath North’s mugshot, and even op-ed pieces in this newspaper have been circulating around campus.

The decorated veteran who was convicted for perjury, but successfully appealed, for his involvement in the Iran-Contra Affair spoke on campus on Nov. 12. His talk in Swasey Chapel and his class visits were met with mixed student reactions.

The event raised $1,200 which will be evenly divided between Licking County Veterans’ Service Organization and Wounded Warrior Project.

Rohit Krishnan ’18, a history major from Chennai, India, disagreed. “I believe that Oliver North is a man who unrepentantly aided and abetted some of the most horrific crimes of the Cold War. I also believe that he has created for himself substantial wealth exploiting his infamy, through book sales and questionable charity work.”

Jake Mullin ‘17, a computer science major from Philadelphia, Pa. said, “I learned that day about the whole Iran-Contra Affair. It kind of seems stupid that they would bring some like that, a clearly guilty person to school.” He continued,“I think it was ironic.”

During his talk, North avoided politics and emphasized veterans.

“I thought [his speech] was good; it was mostly focused on veterans. However, he did mention Fox News a few too many times for me,” said MJ Gewalt ’17, a political science and communication double major from St. Louis, Mo.

Regarding North’s criminal record, she said, “He’s a war veteran despite the controversy. He does a lot of good work for the Wounded Warrior project.”

“I thought it was a very well done event. It was for a good cause. I think the message overall was really good,” Rick Brewer ‘16, a history major from Green, Ohio, said. “What’s most important is the veterans. He seems like a guy who loves his country.”

“I just think the message of honoring your veterans every day is very important,” said Devon Pitts ’17, a sports leadership major, women’s studies minor from New Albany, Ohio. “We take for granted our freedoms and the right to exercise our freedoms.”

The controversy itself motivated one student to attend the talk. Jacob Betts ’15, a cinema and theatre from Bryan, Ohio, said he went because of “morbid curiosity. I was actually kind of thinking somebody would end up storming the stage and embarrassing themselves but nobody did.”