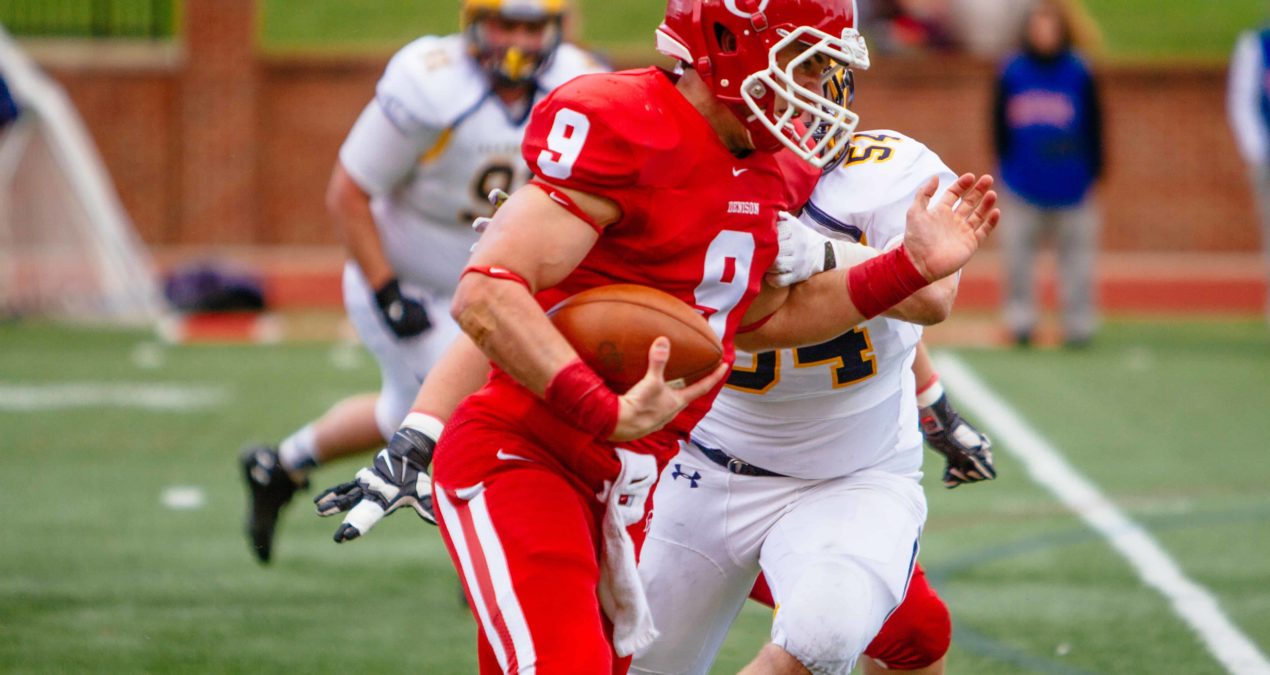 As Denison quarterback Brandon Sklenar ‘15 yelled “HIKE” to signal the first snap of the Senior Day game, and took a few quick steps back into the pocket, he surveyed the field, searching for an open receiver.

A blur of red streaking across Piper Stadium amongst the sea of white Allegheny jerseys caught his eye, and without hesitation he fired the ball downfield in the direction of DuShawn Brown ‘16, his fleet-footed number one receiver.

Fighting a pair of Gator safeties, Brown leapt several feet into the air and snatched the ball before being pulled to the ground for a 40 yard gain.  The acrobatic play set the tone for the rest of Saturday’s high-scoring and record-breaking affair.

Sklenar led the charge for DU’s offense, throwing for 406 yards, rushing for 44 more and scoring all of the team’s six total touchdowns.

His main target, Brown, was unstoppable.  On 15 receptions, he nabbed four touchdowns and shattered the school’s single-season receiving yard record, adding 339 to his now 1272-yard total.

Brown attributed his success to the years of experience and of bonding between him and his quarterback.

“Brandon and I have been playing two years together so we’ve had some time to work on our timing and connection,” the receiver said.  “From playing spring ball to this past season, we were really able to find our chemistry and it showed Friday.”

Brown also broke the NCAC record for receiving yards in a single game, which was set in 2010 by Josh McKee of Wittenberg in a 318 yard performance against Washington University.

The Big Red attack was aggressive from the very beginning of the day.  In the first quarter, Sklenar tossed two touchdowns to Brown and helped engineer a drive that ended with a Matt Puracchio ‘15 field goal early in the second quarter.

With two minutes left in the half, the offense pushed the score to 24-0 with a rushing touchdown from Sklenar.

In the third quarter, Allegheny finally countered with a short passing touchdown, but it was not nearly enough to catch up with DU’s momentum on offense.  Brown scored twice more before being taken out of the game early in the fourth quarter.

Wide receiver Charlie Mueller ‘18 had the last word for the Big Red.  He snagged his second touchdown pass of the season with just under nine minutes left in the game.

While the offense received most of the attention for their performance, the Big Red defense played one of their strongest games of the season.

Andrew Baird ‘17, whose play in the secondary helped energize Denison’s defensive charge, emphasized the importance of preparation to the squad’s success.

“From watching film all week, the coaches were able to see that when certain players were on the field, that meant a certain type of play was coming,” said the safety.

“So when the coaches saw this in film, we had certain defensive alignments that put us in the best position to stop what they were trying to do during the game.”

In the first half, DU held Allegheny to 72 total yards and only allowed two first downs.  While the Denison offense racked up 559 yards on the game, the Gators managed to scrape 288.

This is thanks to steady and reliable role players like Baird, who ended the game with 15 tackles and an interception; Anthony Sernus ‘17, who tallied 10 tackles; and Luke Romick ‘16, whose interception near the end of the third quarter led to a crucial score.

Baird had nothing but words of respect for the senior class.

“Coach Hatem the whole week preached about giving seniors the proper send off on their last home game,” he said. “The best thing we could do for the seniors is come out and get a big win that they will remember forever.

“As long as we played as we knew we should and could, there was no doubt we were going to win. Knowing that we gave the seniors a memory like that is all you could ask for.”

“I feel very proud to have had such a dominating win for our seniors especially since it was their last game at home in Piper Stadium,” Brown said. “With this late season win, our confidence will carry over to next Saturday against Kenyon.”

On Nov. 15, Denison will travel to Gambier, Ohio to battle Kenyon in the final game of the season.  Kickoff is scheduled for 1 p.m.