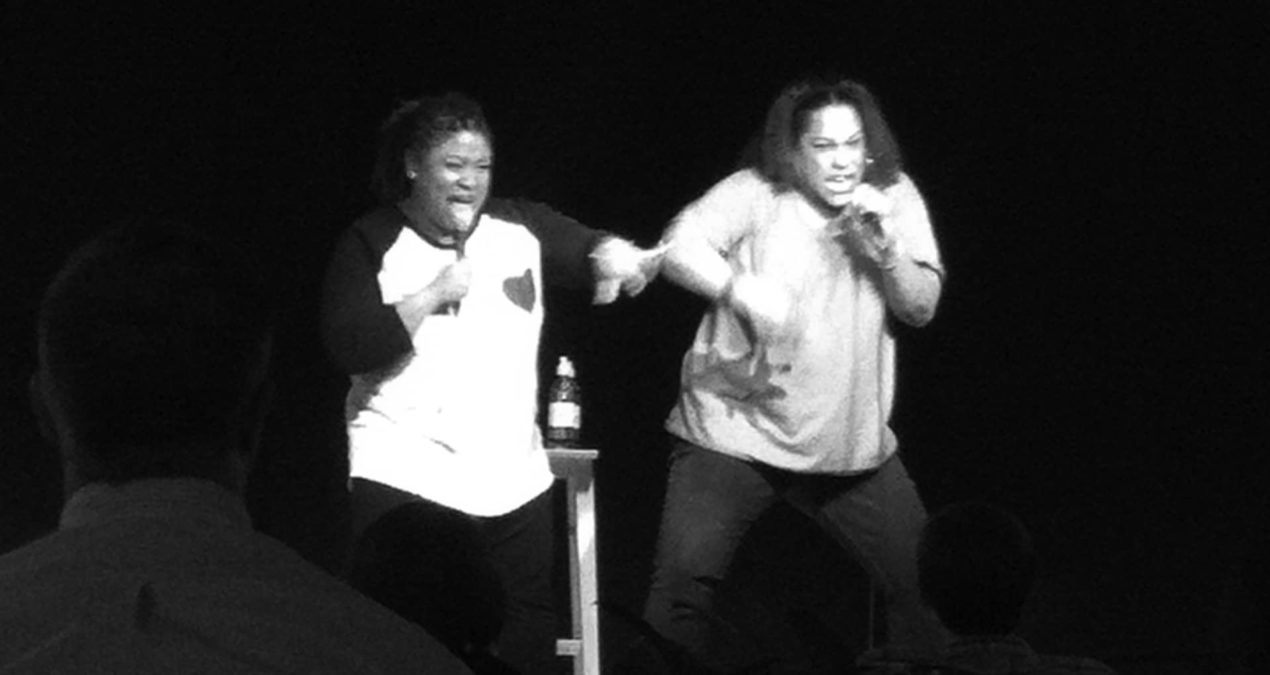 This past Saturday, Denisonians were graced with the hilariously comic duo, Frangela. Frangela came to Denison presenting some of their most recent comedic pieces with a passionate, very straight forward and energetic performance.

They began their pieces by creating a personal dialogue, but as the show went on the audience became integral to the comedy. Frangela repeatedly asked the audience to repeat after them in a chant or just asked questions to individuals causing riotous laughter and sense of community.

The comedic duo met and began their career together in Chicago, Ill. Angela V. Shelton is from Omaha, Neb. and is commonly known for many productions, one in particular being a voiceover in the movie, “Cloudy with a Chance of Meatballs.” The other half of Frangela includes Frances Callier of Chicago, Ill. She played “Roxy” in the Disney TV Series “Hannah Montana” and Helen in the Nickelodeon series “Drake and Josh.”

As I sat in and observed the audience, Frangela never lost the their attention. Everyone was laughing, but there were times when the content was fixed on only race. It was almost uneasy for the audience member at times because the reaction could be very awkwardly mixed between off-color humor and a joke gone wrong.

Contrastingly, Nicolette Oudkerk ’17, a chemistry major from Brooklyn, N.Y., felt that “the show was entertaining. It was refreshing to talk about different cultures and issues in cultures in a not so serious manner.”

The group was confident with the material they created and at most times this echoed with the audience. The group seemed to go right along with the dialogue with passion and interest.

My favorite of their pieces was the skit about how everyone butchers names if they aren’t typically “White” American. This portion of the set was completely relatable to everyone in the audience.

According to India Anderson ’17, a psychology major from Chicago, Ill., the show was, “pretty funny…but there were some things that the duo discussed so candidly that it made me hear the sound of crickets from the audience.” I’m sure this happened to a lot of audience members because Frangela did take a couple of risks with their jokes.

I also remember saying in my head, “When are they going to start telling the jokes?” But I guess storytelling was more of their creative niche.

When Frangela was closing their show, I could see the audience getting a little bit upset because it was over so fast. I can admit I felt that way too because I assumed Frangela was going to go deeper into their jokes and have a little more in store for us. Nickeyla Highhtower ’17, an economics major of Chicago, Ill., was one who especially felt this way because it hit close to home. “I loved Frangela’s comedy set,” she said, “because it made me feel like I was back at home with my mom and aunt who cracked the same types of jokes.”

You don’t find it common to see a television personality who is true to themselves on and off camera. But this is impressively reversed in the case of one half of the Frangela duo. Frances is a firecracker on TV and on stage and it was wonderful to see her explore a diverse genre with the same comedic skill that she presented in her on-screen days.

Frangela shocked and surprised Denison’s audience with a sassy look at race relations from a comedic perspective. Overall a job well done.