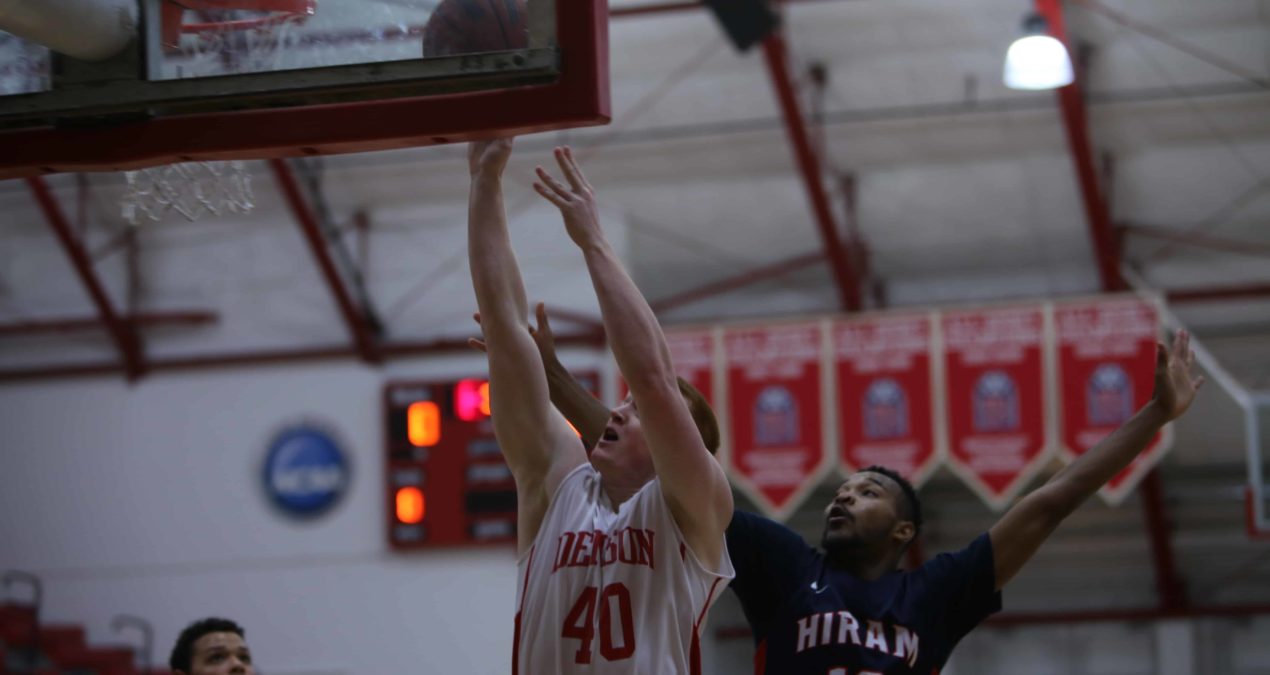 The DU men rebounded this week from their devastating 68-65 loss against Allegheny to defeat both Hiram and #23 Ohio Wesleyan 72-63 and 73-70, respectively.

Rebounding was a critical factor for the Big Red, especially against Allegheny, where they grabbed 41 points.

Ultimately, poor shooting from both three point range (20 percent) and overall (40 percent) haunted the Big Red, and allowed Allegheny to maintain a lead.  Brad Woolard ’15 provided support off the bench with a solid performance of 13 points and five rebounds, but it was not enough to pull away from the Gators.

In the final seconds, David Meurer ’17, who scored 14 points and contributed six assists in 23 minutes of game time, had a chance the tie the game with a three pointer but came up just short.

Meurer redeemed himself against Hiram on Jan. 21 with a 21 point performance.

After the win, he emphasized the necessity of solid fundamentals. “The biggest difference in winning and losing close games are the little things” the guard said.

“Things like winning loose balls, being in a defensive stance at all times, [taking] charges, all the small things add up to either win or lose.”

Team chemistry has been a major factor in the successes of the squad. Bench points have made an enormous difference for the team as of late with 40 against Allegheny, 45 against Hiram and 25 against Ohio Wesleyan.  Meurer was proud of the Big Red’s unselfish playing style.

“Chemistry is something that definitely leads to team play and that’s what our team is built on,” he said.  “We are all very close,”

Woolard, who scored 13 points off the bench against Hiram, credited the coaches and their role in preparing the team to succeed.   “The coaches put in a ton of time watching film of our opponents and us,” he said.

“The level of preparation that we step into at practice every day makes it easy as a player.”

The squad worked together and shot a blazing 62 percent from the field in the first half of the game against OWU on Saturday, as they took an 18 point lead at intermission.

The Big Red were able to secure the three point upset when Bret Woolard ’16, who paced Denison with 16 points, made a breakaway dunk with five seconds remaining in the game.

The season is now entering its final month with Denison sitting at a record of 10-7 (4-6 NCAC) and looking to make a late season run.

Defense seems to be the focus down the stretch for DU. Meurer was confident about the future, but was quick to point out that the team still needs to improve.

“Our biggest adjustment moving forward has to be on the defensive end and really committing to playing hard defense at all times,”  Meurer said.  “That started [against Ohio Wesleyan].”

The Big Red experienced both triumph and heartbreak this week, but anytime a team has a close win against a nationally ranked conference rival, the effects can change the outcome of an entire season.

“That win got us back on track in the league and confidence is sky high” said Meurer.

The Big Red return to action on Jan. 28 against DePauw in Greencastle, Ind.

Volleyball suffers straight-set loss to DePauw on the road