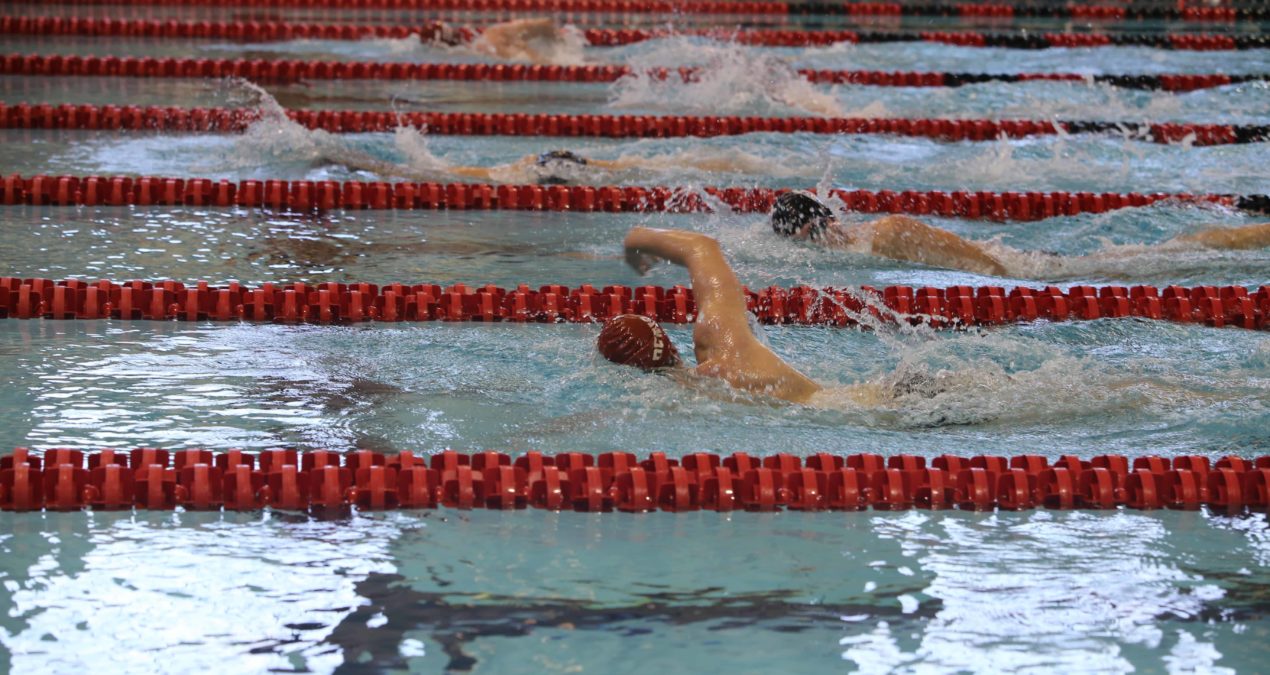 Despite the additional pressure of classes starting up again, the Big Red men’s and women’s swim and dive teams did not let difficult course schedules get in the way of their training in preparation for their victories against Carnegie Mellon University on Saturday.

The men defeated the Tartans soundly, with a score of 174-95, while the women scored 170 points to Carnegie Mellon’s 104.

The women swam away with 11 event titles. Notable wins included Marissa Bednarek ‘16 and Ashley Yearwood ‘16’s three event victories. Both juniors contributed to the 200 medley relay team’s 1:47.42 winning time along with teammates Carolyn Kane ‘17 and Mary Van Leuven ‘16. Yearwood also swam to victories in the 50 and 100 freestyles, while Bednarek won the 100 and 200 breaststrokes.

“We had a lot of great swims [on the women’s side] and it was great to see everyone swimming very well before conference,” Willingham said. “We have some excellent momentum right now and we just need to keep it going over the next few weeks.”

Willingham won the 200 backstroke in a time of 2:09.52, just 19 hundredths of a second ahead of teammate Libby Dalziel ‘16, who recently returned from a semester abroad in Prague.

“I’m taking it one meet at a time, one day at a time,” Dalziel said. “I joined a small swim team by where I was living in Prague, so I swam with them about four times a week in the mornings, and I actually got the chance to compete in a meet.”

In the men’s competition, the Tartans of Carnegie Mellon were extremely outmatched by the Big Red on Saturday. The men’s team’s 79 point margin of victory can be attributed in a large part to Jack Lindell ‘17’s four event wins.

Teammate Stuart Hohm ‘18 cited Lindell’s performance at the meet as a highlight. “[Lindell] took down [Carnegie Mellon’s] pool record in the 400 IM,” he said. “It wasn’t a phenomenal time in comparison with his other performances, but it was still really cool.”

Hohm won both the 200 and 500 freestyles. The rookie’s first collegiate season has been marked by stellar swims, although he claims that his mental performance hasn’t been up to par as of late. “My goal [for this weekend’s meet against OWU] is to just go race and keep my mental edge sharp because that’s something that I’ve kind of let deteriorate this past couple of weeks,” he said. “I’ve let my mind get dull and I need to get my edge back.”

The diving was not scored at the meet, but Division III national record holder Connor Dignan ‘15 still stepped up to the challenge. His six dive totals of 396.80 on the 1m board and 328.88 on the 3m board were the best at the meet.

Divers typically use “spots” to guide their movements as they dive, and Dignan said that Carnegie Mellon’s dark facility was not an ideal place to execute strong dives. “I did pretty good, but for the divers, it was all around pretty bad conditions,” he said. “In diving you have ‘spots’, and they are very distinct situational images or colors that stand out. Everything at the facility was gray and there weren’t a lot of lights. Flipping through the air we were all blind, but everybody did well for the conditions.”

Teammate Connor Dorff ‘15 agreed, adding that the facility was, “really dark and not very nice. It got to the point where we had someone sitting at the edge of the pool kicking at the water so that we could actually see the water.”

Both teams will return to action on Saturday at Ohio Wesleyan in their final dual meet of the season.