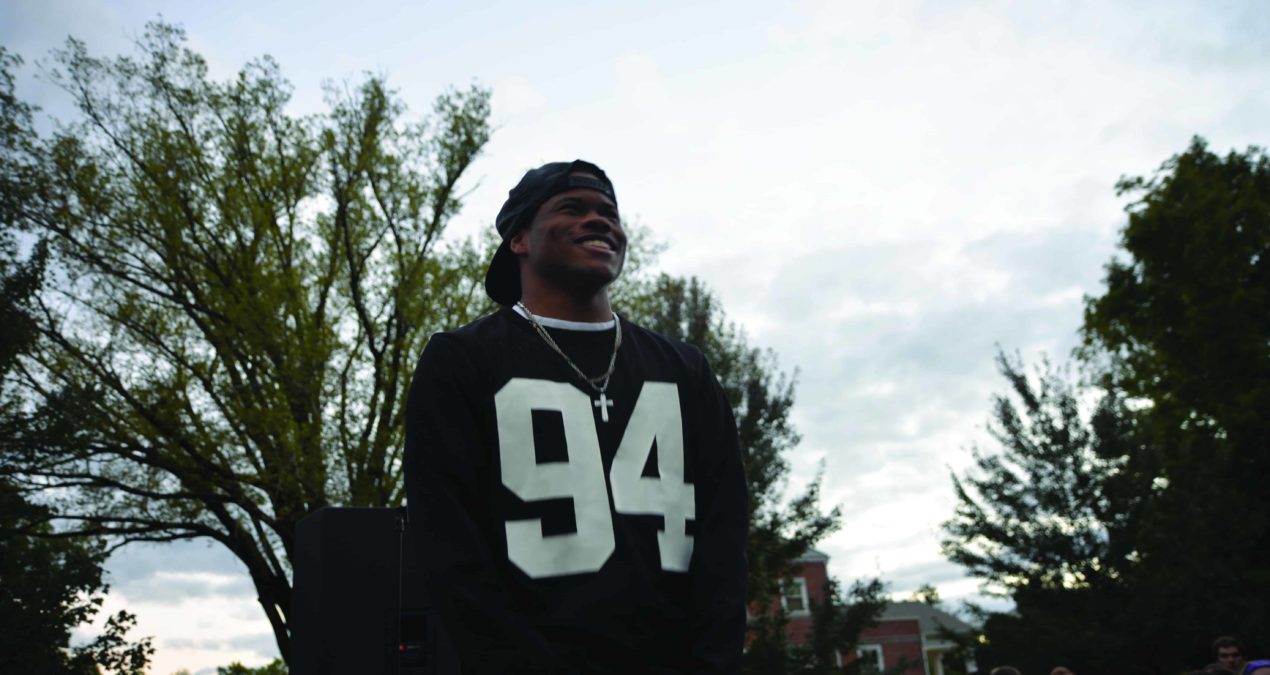 With lyrics that celebrate the joys of a night out and bash the conformity of greek life and dining halls of Denison, Joseph “Joey Aich” Holbert is the voice that everyone on this campus should listen to. A Communications Major from Cleveland, Ohio, Holbert ‘16 poetically blends the highs and lows of college with heavy subjects from his life back home. For Holbert, music came naturally long before coming to Denison.

“I’ve always been into music and performing, like choir,” said Holbert, “around middle school I started writing poetry or different raps, just little verses mimicking whatever I heard on the radio or people that I listened to,” said Holbert. He thought of rap as a way to free his mind, and didn’t really begin to turn his hobby into a passion until his junior year of highschool when he invested in a microphone and made an account on audacity, which offers a free platform for artists to record and edit audio. Only his close friends knew he was rapping.

“I didn’t want anyone to know in my family at that point,” said Holbert. “I would record when no one was at home, edit everything, then when my parents came home I would be like ‘alright, we’re done’”, said Holbert. He worried that his parents would be concerned with the negative stereotypes of aspiring rappers, such as dropping out, drug use, and low incomes.

“They knew that I was capable of rapping, but they didn’t know how much of an extent it was or how much of a passion it was for me, so I kept it a secret from them until Senior year of highschool,” said Holbert. Like many successful artists and entrepeneurs, Holbert needed a push to further elevate take his rap game. That push came in February of his Senior year.

“That February my grandmother died when I was going through a writers block kind of thing, and I was working on a song called exhibit J,” said Holbert. “When she passed away, I wrote the rest of the song in dedication to her. I showed a couple people after uploading it to soundcloud and they told me it was pretty good, so I realized my music deserved a higher quality than audacity.” said Holbert.

Holbert performed his first show later that year at Truz Fest in Cleveland, and continued to record and put out music on soundcloud into his freshman year at Denison. There, he met what would become one of his closest friends and fellow rapper Rob “Sarob” Tate ’16. Tate released his first EP the summer before his sophomore year, and once Holbert heard it, an incredible friendship emerged.

“I liked how organic it was with Sarob,” said Holbert. “we’d be eating lunch and he’d spit something. I never knew he was a rapper, I never knew he had the same type of dreams that I had. It wasn’t like ‘we need to collab,’ it was more of a friendship groove first,” said Holbert. The difference between the way Holbert is as a rapper and a friend is incredible to Tate.

“I feel like whenever I see Aich rap, there’s almost a complete change from his day-to-day personality. It’s not even a front or anything–it’s just him freeing himself a bit,” said Tate. “Usually people just see his hilarious, playful side and people like him for that. But rapping sort of lets his deeper emotions out without any fear of what anyone thinks,” said Tate. Tate is currently studying abroad in Oxford, England so the two do not have any songs in development currently. As for Holbert, a continued focus on live performances in and around Cleveland to continue his musical success.

“This summer is big for me. I plan on performing a lot, I want to drop more videos and songs and continue spreading my name,” said Holbert “I’ve been lucky to perform in the Cleveland area a lot more, and people are starting to have an idea of who I am,” said Holbert.

People at Denison recognize him on campus robustly displaying his T-shirts, spitting and writing raps, and being the center of attention. Holbert likes this, but knows that finishing an education and keeping an air of humility is more important than any fame or fortune.

“I’ve been pretty humble about my career, and I want to keep that. I don’t want people to be saying ‘he’s changed’, but the most important thing to me is to remain humble and think of everything as a blessing,” said Holbert.

For music fans that enjoy artists such as Chance the Rapper, Joey Aich displays a similar style and tone in his music. Listen to Joey Aich on soundcloud or watch his newly released music video, Smooth Hardcore on Youtube.

Lynn Schweizer: Honored for 44 years of dedication to Denison