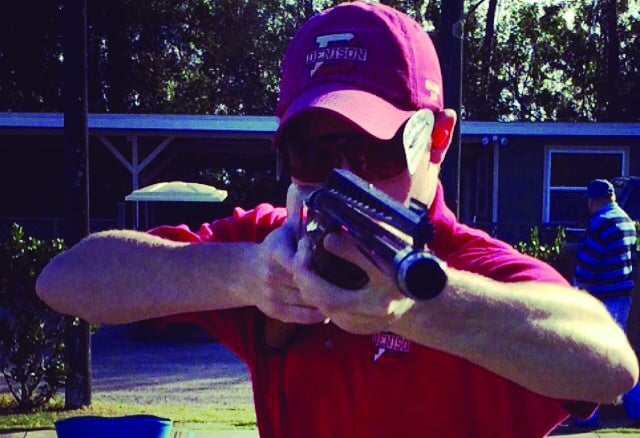 The word ‘trap’ could mean a lot of different things. There is the EDM-based trap music, or a drug dealer’s ‘trap’ house, or it could be a cage or net used to withhold creatures. For Bruce Webster Burton ‘17, trap is the shooting category that has propelled him to the national ranks.

“It’s like if you specialize in swimming in the hundred free style, you still swim other events. Those other disciplines make it easy to shoot your specialization. I shoot them all, and I’m really bad at some of them, and I’m really good at other ones, but it’s all a process,” Burton said. Burton is currently ranked 26 in the country, but is having a better season than last year because he did not shoot for the fall season. The winter is a difficult time to shoot as well because of the extra clothing needed to stay warm, and in a sport where timing needs to be in sync with the pace of a speeding bullet, the equipment is meticulously analyzed and obsessed over.

“I still shoot in the winter, but all the biggest shoots are done in warm weather, because the jackets you wear kind of hinder your ability to break really, really good scores,” Burton said. As far as his gun, Burton considers it a part of his family.

“I have a very special relationship with my gun. If I were allowed to, I’d probably sleep with it,” Burton said. “I call it Big Trigger, it’s pretty near and dear to my heart. It’s all customized to me so if any other shooter were to pick it up it wouldn’t feel the same.” Burton considers his gun as a tool more than a weapon, and has heard a lot of backlash from his teachers and peers about the dangers of guns and the need for gun control laws.

“I would definitely feel comfortable with my skills in a zombie apocalypse, but I’ve never had the thoughts of killing other people with my gun,” Burton said. “There are so many deaths and murders per year, and that causes a negative light on the shooting sports. I think it’s important to look at who’s doing these shootings.” He firmly said he has known no one that’s gotten into the sport of shooting and turned their guns on people, and while he cannot keep his gun on campus, he has traveled with it around the country to compete.

Within the last 12 months, Burton has traveled to San Antonio, Texas for the National Championships, Sparta, Ill. for the World Championships, New York for the Northeastern Grand and will be traveling to Florida for the Southern Grand. These major tournaments are peppered in with smaller competitions such as the Michigan State shoot, Ohio State Shoot and the Pennsylvania State Shoot. He competes proudly for Denison’s shooting team, but is looking to recruit more people in order to have a more visible presence on campus.

Last year, Burton told The Denisonian he was trying to have a full team of five people represented at the collegiate national championships, but it has been a more difficult than he had foreseen.

“It’s really tough, because someone who has shown a lot of interest and promise, Tyler Grasser ’16, is abroad and won’t be back until next fall, which is when the national championships are,” Burton said. “I’ve also been talking to PJ Fallon ‘16, who is also interested in moving forward. He’s got a shooting background.”

For now, Burton will have to continue to anchor the Denison Shooting Team while he puts up astronomically good scores, shooting between 90-99 clay pigeons out of 100 every time. He has yet to shoot a perfect round, but with the travel and work he will be putting in this spring, look out for Bruce “Webster” Burton to break not only targets, but records.