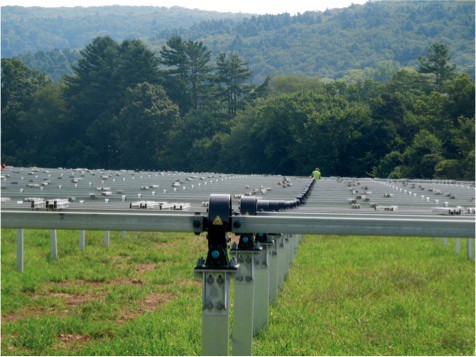 Past solar panel systems on campus have been small “demonstrations” compared to the new project that Jeremy King, Campus Sustainability Coordinator, and Seth Patton, VP of Finance and Management, say is in the works to be completed within this calendar year.

Denison is excited to partner with American Electric Power (AEP) to start work on 6,000 solar panels in two locations this spring. Together, this array will provide around 15 percent of the campus’ energy needs. One thousand panels will be housed on the field next to the Recycling Barn on the way to The Homestead. The rest of the system will be on the southeastern edge of the BioReserve.

Financially, AEP will supply the actual solar arrays. In return, Denison will provide the land and agree to buy the energy created. Patton looks forward to this partnership, as it will allow for a multi-million dollar project that Denison could not otherwise undertake. The panels will not only reduce Denison’s carbon footprint by 10 percent, but Patton also believes that, “Financially we’re not going to have to pass any additional cost on to students.”

By dropping our demand for power, Denison will ultimately decrease its overall rate of electricity from external sources. This will be especially significant during summer months, when energy is in peak demand and the panels are most efficiently used.

AEP’s contribution will pair well with Denison’s Green Revolving Fund, a trust created in 2012 that invests in energy on campus. The savings from each sustainability project goes back into the fund for future projects, allowing up to $500,000 per year for energy efficiency on campus. While the Revolving Fund has allowed for projects that focus on saving energy, this AEP project creates a new initiative to generate energy.

“We are trying to reduce our carbon footprint to zero,” says King, and this is a huge step toward Denison’s sustainability goal. The campus took a pledge to be carbon neutral by 2030. With this project, it looks like their benchmark goal of a 30 percent reduction by 2020 may be reached sooner than anticipated. Another large step towards this goal was when Denison switched from burning coal to natural gas at the heating plant this year. This decreased our carbon footprint by 15 percent.

Buzz about the new panels has already received attention as a means of an outside the classroom learning opportunity. The biology department is interested in allowing students to study the panel installation process and the disturbance it has on the BioReserve. “We envision the smaller array being utilized by students and faculty that want to use it for research or part of a class topic” says King. He also hopes to post a live feed on the solar array’s progress, such as tree savings and carbon dioxide offset. After learning about the project, biology major, Madison Kavanaugh ‘16 said, “I could see there being great crossover potential between the environmental science and biology departments. It would also allow for an awesome opportunity in researching cutting edge biotechnology.”

Students interested in participating in this project or other sustainable efforts on campus are encouraged to contact Jeremy King, [email protected], or visit the Sustainability page on MyDenison.