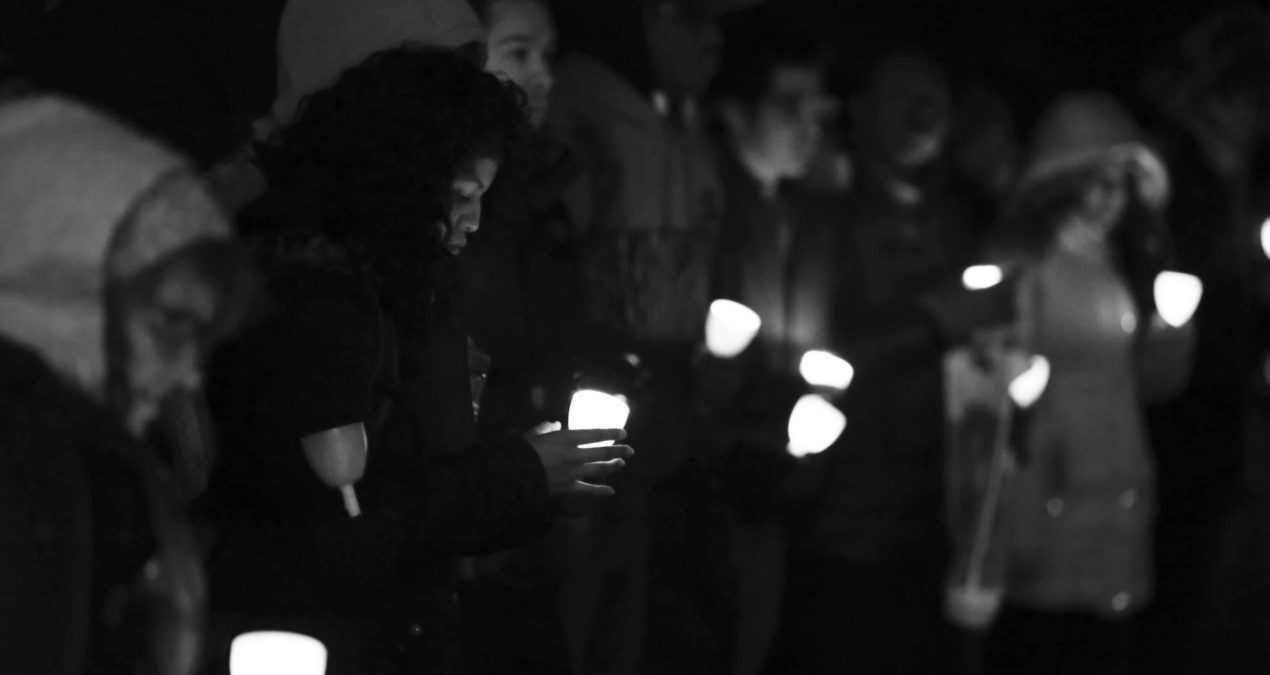 Upwards of 150 students braved arctic temperatures on Thursday, Feb. 12 to attend a candlelight vigil in remembrance of three University of North Carolina students who were murdered on Feb. 10. Hosted by the Muslim Student Association (MSA), the vigil saw diverse rhetoric from the crowd. Some urged campus unity while others took a more critical approach toward Islamophobia in the U.S.

Longtime MSA member Jessica Elsayed ’15 opened the vigil by explaining the events of Feb. 10. Three Muslim students—Deah Shaddy Barakat, Yusor Abu-Salba and Razan Abu-Salba—were shot and killed in their apartment in Chapel Hill, N.C. that night, according to CNN. The primary suspect, Craig Hicks, a 46-year-old white man who turned himself in to police, has been charged with murder and indicted last Monday, Feb. 16.

Some commentators have seen the shootings as a hate crime, and many Denisonians agreed. Several Muslim students, including Elsayed, Aissata Berry ’15 (president of the MSA) and Yusuf Ahmed ’16, spoke at the vigil of the fear they felt for themselves or for their families in the wake of the murders.

While some students took the opportunity to criticize politicians, calling U.S. officials “Islamophobic” or asking Arab world leaders to come to the U.S. to honor the victims, others focused on personal stories or urged campus unity in the face of discrimination and prejudice.

“I am extremely impressed with the turnout,” said Elsayed, a political science major who grew up in the U.S. and Egypt. “I was really really glad to see people I hadn’t seen before, who came because they were upset because of the bigger tragedy.”

Elsayed also spoke of the larger context of being a Muslim at Denison. She said it is sometimes difficult for Muslim students—especially those wearing a visible sign of their faith, such as the hijab—to gauge the intentions of other students.

“A form of privilege is for you to kind of walk around and presume people are going to treat you a certain way because of who you are and because of who they are,” she said, “whereas I’m not certain. When someone is extra nice to me, I don’t know if it’s because…they really are nice, or because they like me or don’t like me.”

The vigil started at 9 p.m. and lasted about 40 minutes before dispersing. Many students were visibly shaken afterward and had no comment to provide to The Denisonian.

President Weinberg was one of a few faculty members in attendance. “The vigil was a positive sign of progress for Denison,” he said in a statement to The Denisonian. “What brought people together was a common goal of creating a world where we don’t need vigils because these kinds of events don’t happen.” Weinberg added that Denison “views diversity as a core value.”

#OccupyDCGA starts a conversation with administrators about demands