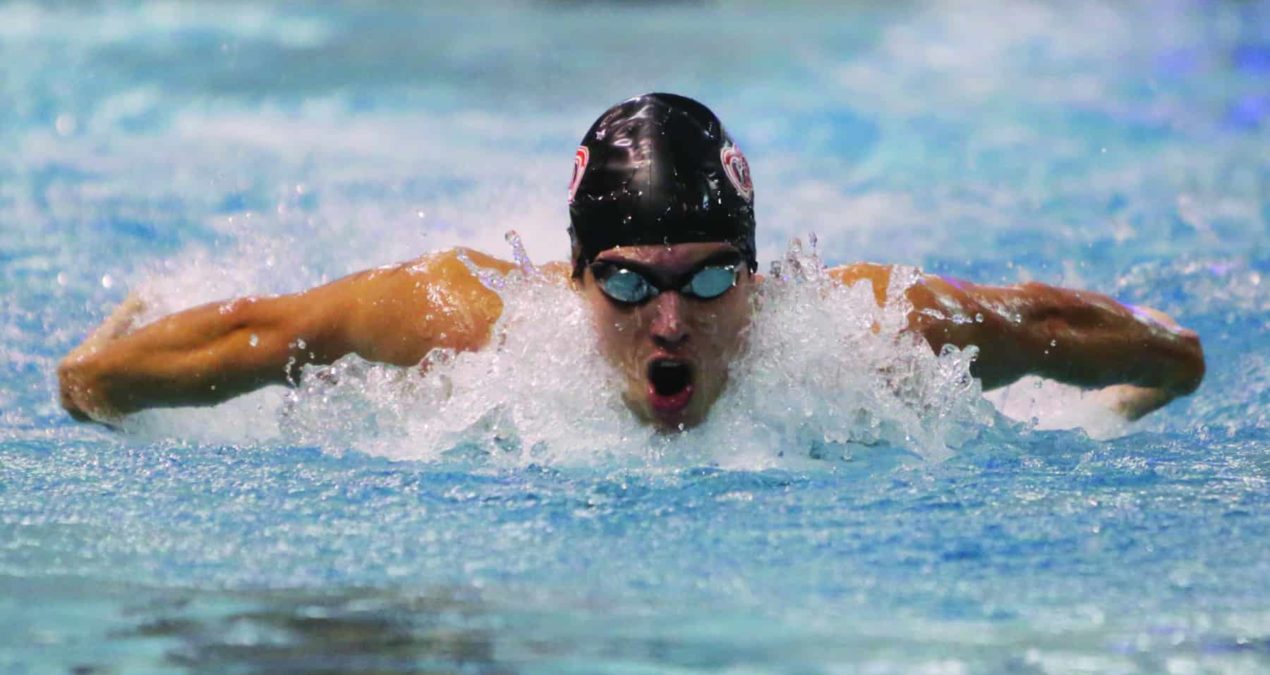 Swimmers, coaches and meet officials alike crowded around the ropes separating them from the pool, shouting as they cheered on the competing athletes. Chlorinated water splashed off the surface of the pool in Trumbull Aquatics Center as swimmers raced to touch the wall first in the final event of the North Coast Athletic Conference championships, the 400 freestyle relay.

The Denison men and women had taken early leads heading into the relay, with crucial points from the 1-meter dive going towards the men’s score, and record-breaking performances in the pool keeping the women afloat. In many ways, the relay was just a way to ensure that both teams added more points to their overall tallies.

The women set four conference records at the meet, two of which were set by Campbell Costley ‘17. Costley broke the 1,650 and 500 free records with times of 16:43.71 and 4:49.85, respectively. She set the 500 free record earlier in the day on Feb. 12, and then returned to the pool for the finals, where she broke her own record again.

“The competition in the race was tight, and that record could have been anyone’s,” Costley said. “I just knew that I had to give it my all if I wanted a shot at it. In finals, it’s really all about racing, not necessarily the time since scoring is based in the place you get not the time you get. I knew everyone would be very competitive at night especially my training partner Taylor Johns ‘16. Luckily for us, we went 1-2 and scored some big points for the team.” Connor Dignan ‘15 was named NCAC Diver of the Year for his performances at the meet.

Johns finished in second in the 500 free with a time of 4:50.43, and followed up for another runner-up finish in the 1650 free (16:44.13). Costley’s performance at the meet earned her NCAC Swimmer of the Year honors, making her the ninth female swimmer from DU to win the award. In addition to her two record-breaking performances, she also won the 200 free and contributed to the Big Red’s winning 800 free relay.

Halli Garza ‘18 was named NCAC Newcomer of the Year. The freshman from Stockton, Calif. captured titles in the 200 IM and the 200 fly, despite a case of the stomach flu earlier on in the meet. Her time of 2:03.17 in the 200 fly broke the Trumbull Aquatics Center record.

Garza swam in the final of the 400 IM but did not finish how she had hoped due to her illness. She used this as motivation for her favorite race, the 200 fly.

“I kind of used it as a motivator, I knew I could do it if I made it in the 400,” Garza said. “I went to the 200 fly thinking ‘let’s see what I can do.’ It feels amazing [winning individual titles and the team championship]. I just wanted to show up and do well for the whole team.”

Heading into the 1-meter dive, the team held a shaky 35.5 point lead over Kenyon. However, buoyed by a 1-6 sweep by the divers, the men entered the last event of the meet 216 points ahead.

“We all got the job done,” Dignan said. “All of our guys qualified for regionals this coming weekend in Chicago. Nobody did exactly what they wanted, but that’s okay, because it’s not Texas yet.”

Dignan was named NCAC Diver of the Year for his performance, while his coach Russ Bertram was named Male Diving Coach of the Year.

Aaron Saccurato ‘18 earned NCAC Newcomer of the Year honors for his standout performances in the 1,650 freestyle and the 500 freestyle. The freshman set the pool record in the 500 with his time of 4:27.55 in the preliminary round. He finished fourth in the final. Saccurato also won the 1,650 with his time of 15:40.26. The freshman led a stable of strong underclassman distance swimmers. Teammate Stuart Hohm ‘18 was runner-up in the 500 and Ben Burdick ‘18 finished in fourth in the 1650.

Rosenburg captured the 100 breaststroke title. Rosenburg, who held the national record for a brief period last year, said that his focus was on winning. “This year was more along the lines of trying to win it for the fourth year straight,” he said.  “The time kind of mattered because going into this, my time wasn’t necessarily safe for nationals, but I figured that if I were to win the event, that time would be safe for nationals, and if I were to win the event, I’d get the points which are necessary for the team.”

Both teams traveled to Kenyon on Saturday for a Last Chance qualifier. The official qualifiers for the national meet have yet to be announced. The divers will return to action this weekend in Chicago for the Regional Diving Championships.

Hannah Bradvica ‘22 on mental health in the sports world