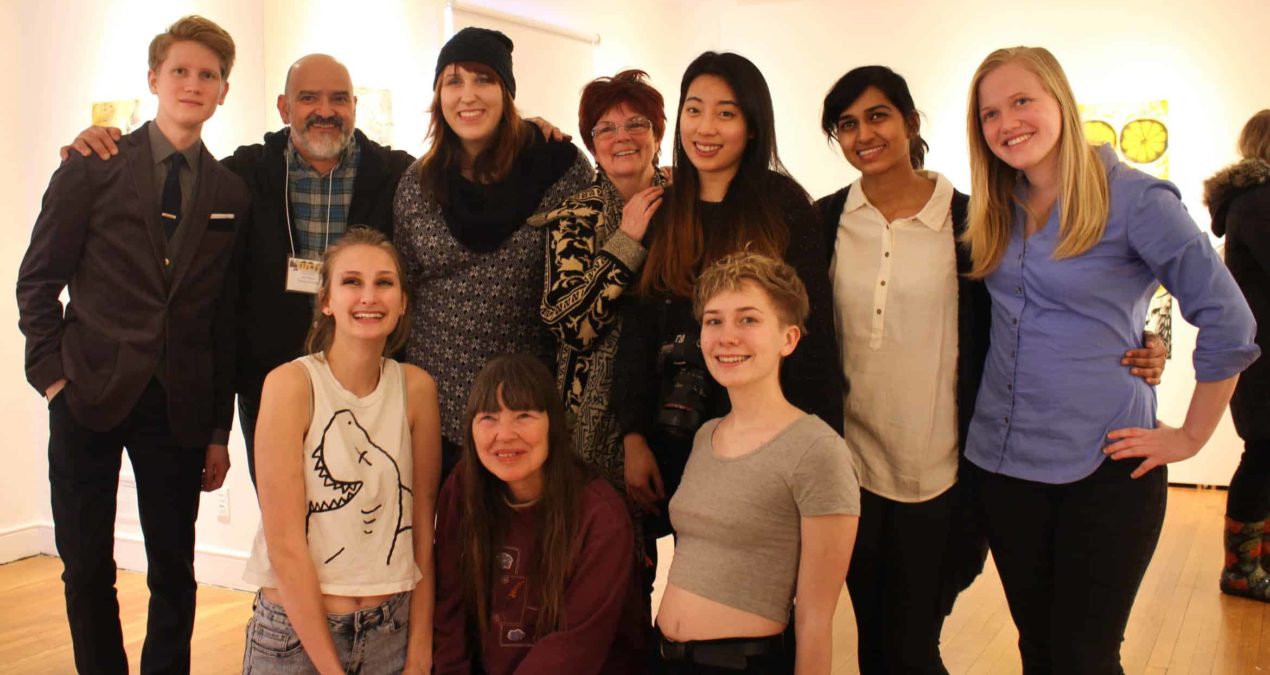 The opening of the Symbiosis art exhibit that took place in the Mulberry House last Thursday was a packed crowd of inquisitive spectators, observing the array of artwork produced by students of Denison’s art department.

The show was a collaboration between the Denison Print Collective and the TUTTI Music Festival. Each artist was able to choose a song that was being featured in the festival and use that song as an inspiration for their print.

“The Symbiosis show was a very interesting interplay between the TUTTI music and art,” said Rohin Daswani ’15 from Kolkata, India. “The pieces were done so perfectly that one did not even realize that it was printmaking.”

The art show’s idea was to have the students convey the feeling they got from the music they listened to in print form. Artists practiced free-writes to draw images inspired by the music and the feelings it provoked. Light refreshments and alcoholic beverages for attendants over 21 were served.

“Like the music itself, the imagery speaks to the transcendent modes of thinking and finding one’s place in the world both the Visual and the Performing arts allow,” said Ron Abram, the Associate Professor of Studio Art and Queer Studies. “The songs and the prints can stand on their own as individual pieces of art, but when they are displayed together as they were at the show, it creates an entirely new and wonderful experience,” said Liz Rosenkranz ’17 from Dayton, Ohio.

“We all had to layer two different kinds of prints—woodcut and etching, except for me. I did woodcut and monotype print, so we were trying to accomplish layered artworks that mirrored the complexity of the music that inspired them while also maintaining cohesion between the two different kinds of prints and between the art and the music,” said Abbie Thill ‘16 from Minneapolis, Minn.

“I was inspired by the strings in the song I chose [Swash I: Icy, Silent Morn], because they reminded me of the Irish fiddle tunes I used to play, and how those songs made me feel,” Thill continued. “I wanted to create the empty and kind of lonely, but free feeling I got from listening to my song [The Swash of Water and Red].”

“My main inspiration was to recreate spheres from different domains of life and to blur their forms by making them look similar,” Jenny Kim ’16 from Seoul, South Korea said about her art piece, Spheres. “The music inspired me to draw the abstract shapes to create an environment.”

“The show was fascinating. I was very impressed by the pieces created by the student artists,” said Raghav Daswani ’15 from Kolkata, India. “If the show took place in Columbus, there is no doubt I would mistake the students for real [professional] artists.”

“With the supplied headphones for each piece, visitors are asked to listen to the TUTTI compositions as they view the parallel prints themselves,” Abram said. “With the Print Collective artists deciding on its title, Symbosis as an exhibition speaks not only to the intertwined relationship of music and visual art, but also the central context of studying and creating here at Denison.”