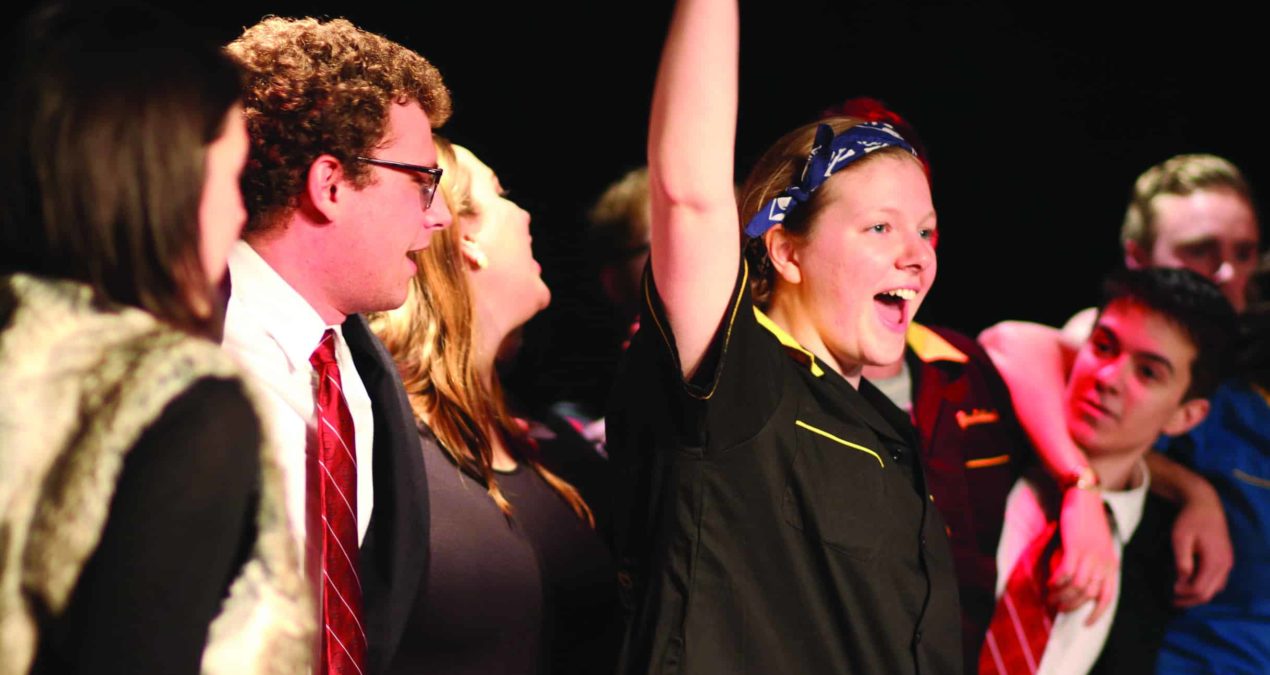 The Nest was packed to the brim as fans and friends waited to see The Iron Triangle, a collaborative project between three popular groups on campus, Ladies’ Night Out, the Hilltoppers and the Burpees.

This year’s Iron Triangle was the first in many years — none of the current members have been involved with a show like this, and very little is known about the history of the show.

“It’s always been kind of this urban legend around [the] Burpees that the Iron Triangle was done before,” said Burpees member Jill Weeks ’15. “We aren’t sure how far back this goes or how many times it’s been done before.”

The three groups alternated between songs and games. This collaboration was clear in the way the Burpees brought members of other groups on stage to perform with them for two of their three games.

“Working with the other groups had a tangible positive impact on our creativity,” said Burpee Jacob Betts ’15. He continued, “One of the reasons [the Burpees] work so well together is because we practice and develop this sort of unconscious shorthand.

However, performing with people who didn’t have that shorthand allowed us get some really cool curveballs thrown our way. It was unlike any other show and it was super cool to watch it unfold.”

Ladies’ Night Out featured many talented and impressive performers including, but certainly not limited to, Imani Abernathy ’16, Meghan Powers ‘16, Gina Babinec ’16 and Emily Myette ’17.

Ladies’ Night Out member Janyce Caraballo ’17 said, “[The Iron Triangle] was so great! It was a great way to unify us and give each other support for our different groups. And integrating all of us was just so much fun! I think for our audiences it was enjoyable as well just to see something new and entertaining.” The Hilltoppers performed many of the same, well-received songs for the Iron Triangle as they did for their Valentine’s Day concert including Justin Timberlake’s “Pusher Love,” arranged by Oliver Deak ’17 and The Killer’s “Mr. Brightside,” arranged by Benson Anderson ’18.

The show, however, was not without hiccups. Most notably, the Burpees were significantly harder to hear than either of the a cappella groups, a problem that was only slightly moderated by the microphones that were later brought on stage. Because most of the noise stemmed from a problem of technical logistics and noisy patrons, the issue could be easily resolved for future shows.

The show culminated in the improv serenade of Emily Smith ’15 by members of all three groups. A truly collaborative and one of a kind moment, the serenade encapsulated the fun, creative feeling of the show.

“Well, I think it’s safe to say that I’m the first person in a long while who has been simultaneously serenaded by members of the Hilltoppers, LNO and Burpees,” Smith later wrote on her Facebook page.

Overall, the Iron Triangle was a resounding success, and performers and students alike spoke highly of it.
Weeks said, “It was awesome to finally bring this event I’d heard about to life. Working with [Ladies’ Night Out] and the Hilltoppers, and getting to share this performance with them will be a great memory. I hope the tradition continues!”