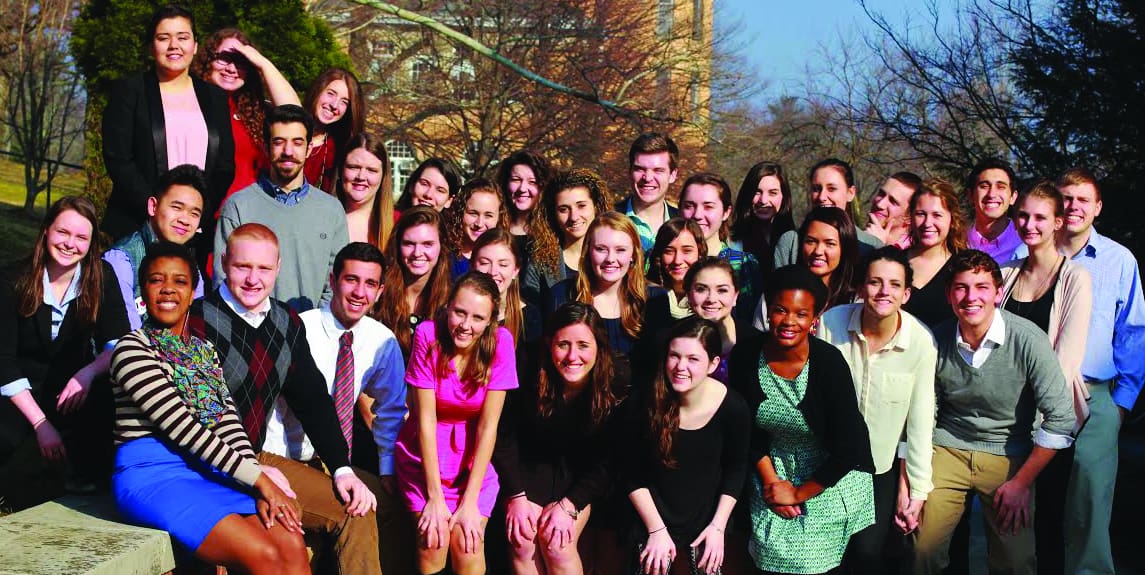 For the first time, an official induction ceremony was held to honor 26 new inductees of Omicron Delta Kappa (ODK).

Induction was very special this year due to the official ceremony that was held. With 36 new inductees, this was the largest number of students since the rechartering of ODK at Denison. “It was a special moment for us to see all of our work come to fruition,” Schultz explained.

ODK is part of the Honor Society Caucus that focuses on acknowledging and celebrating leadership, connecting student leaders and facilitating leadership-based dialogue among student organizations. Emily Schultz ’16, president of ODK, says that “each of these goals come together in creating a meaningful way for students to unite in their mission to make a positive impact on campus.”

ODK was originally founded on Dec. 3, 1914 on the Campus of Washington and Lee University, but was just recently brought back to Denison’s campus during the 2012-2013 academic year. At Denison, ODK connects leaders in the community who have similar passions in order to spread awareness about campus issues to the rest of the student body. They honor all leaders’ hard work by sponsoring events during the year that encourage dialogue and thoughtful reflection. ODK recognizes and honors leadership in a very diverse way. Their Circle, or specific group, encourages students to experience leadership as a form of character rather than a titled position.

Schultz explained that their Circle is currently exploring a number of opportunities to encourage thoughtful, devoted leadership.

Schultz said, “During the fall we held a leadership dinner, [which was] sponsored by President Weinberg and CLIC, that fostered the building of relationships between and among various leaders on campus.”

The group plans to host a leadership coffee gathering this spring. They hope that the event will attract an even larger group of student leaders and provide further opportunities for leaders to connect and imagine future collaborations with one another.

When asked about her presidency, Schultz told the Denisonian that she has “truly enjoyed spending time with other self identified leaders on campus in a formal, yet friendly, dialogue-based setting.”

She was inspired to apply to ODK by the previous president, Sarah Oda ’14, because her personal values “aligned nicely with those of Omicron Delta.” Schultz also explains that her “vision for ODK was to create an atmosphere that welcomes students to connect with others, communicate across difference and work together to solve common issues associated with leading on our campus.”

She envisioned an environment where students could speak freely and discuss topics such as different leadership concepts, stereotypes and concerns.

“I know that leadership can be demonstrated in countless ways, and I have really enjoyed engaging in the conversations that stem from gathering 41, well-intentioned, passionate and unique individuals together on a monthly basis,” Schultz said.

Schultz believes that increasing the visibility of this organization is extremely important. “We are at a pivotal time when we need to be more thoughtful about not only how we lead as individuals, but also collaborate with others as we do,” she said. “There are numerous organizations on campus that, if brought together for certain events, could create an incredible synergy.”

Applications are available in the spring for those who wish to become a part of this highly competitive honorary that is nationally recognized at both the undergraduate and graduate level.